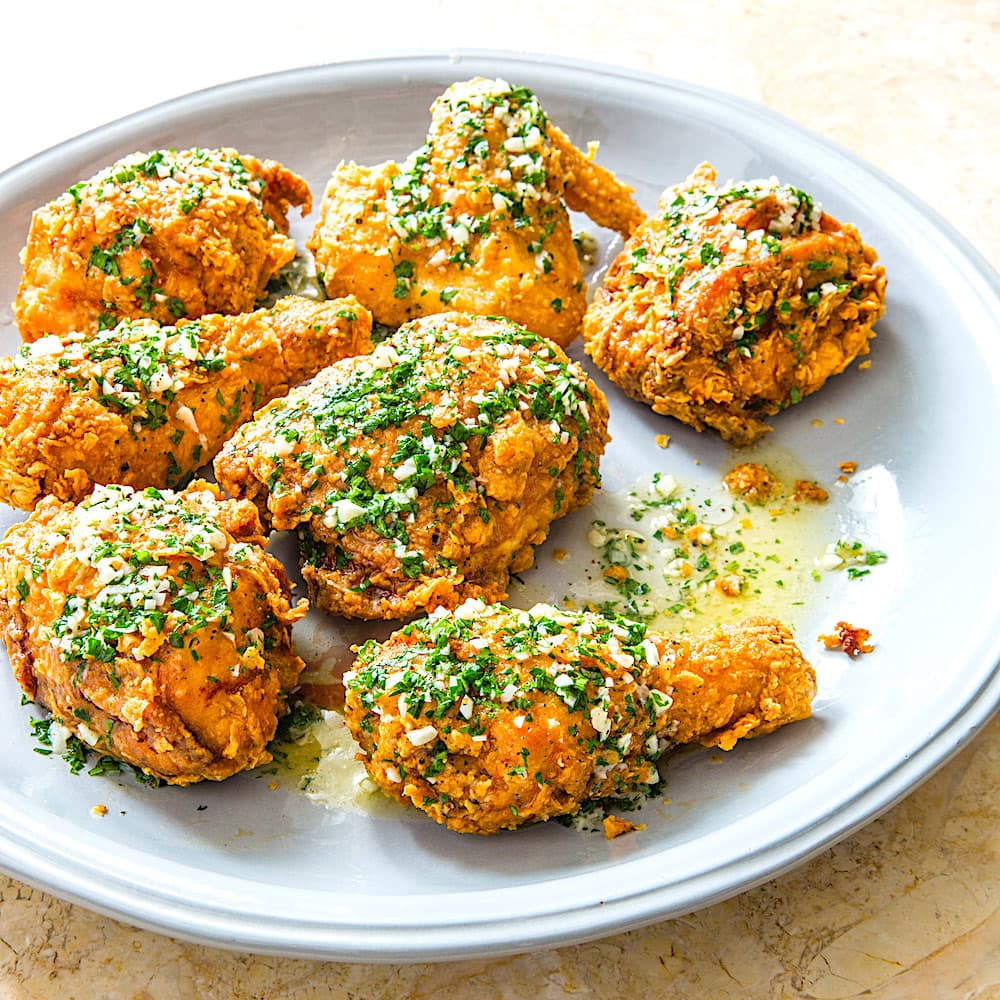 , few things are as dulcet-toned to the ears of the Glorious Harmony that is TFD as the words “fried” and “garlic” in the same sentence! When it’s garlic-fried chicken, few recipes can make the mouth water as copiously as this classic of inland Basque cuisine!

The great mountainous nature of the Basque Country in France and Spain has led to a difference between coastal cuisine dominated by fish and seafood, and inland cuisine with fresh and cured meats, many vegetables and legumes, and freshwater fish and salt cod.

The French and Spanish influence is strong also, with a noted difference between the cuisine of either side of the modern border; even iconic Basque dishes and products, such as txakoli from the South, or Gâteau Basque (Biskotx) and Jambon de Bayonne from the North, are rarely seen on the other side.

Basques have also been quick to absorb new ingredients and techniques from new settlers and from their own trade and exploration links. Jews expelled from Spain and Portugal created a chocolate and confectionery industry in Bayonne still well-known today, and part of a wider confectionery and pastry tradition across the Basque Country.

Basques embraced the potato and the capsicum, used in hams, sausages and recipes, with pepper festivals around the area, notably Ezpeleta and Puente la Reina.

Olive oil is more commonly used than vegetable oil in Basque cooking. Cuisine and the kitchen are at the heart of Basque culture, and there is a Museum of Gastronomy in Llodio.

One of the staple cookbooks for traditional Basque dishes was initially published in 1933. “La cocina de Nicolasa” (the Kitchen of Nicolasa) by Nicolasa Pradera has gone into 20 editions.

In addition to the dishes and products of the Basque Country, there are features of the way of preparing and sharing food unique to the area.

Cider houses (sagardotegiak) are a feature of the hills around Donostia, especially near Astigarraga. These are usually large country restaurants with enormous barrels of cider.

Cider is poured from a height straight into the glass for visitors, with a rustic menu invariably of salt cod omelette, grilled T-bone steak and ewes’ milk cheese with walnuts and quince paste. The cider houses are only open for a few months of the year.

The txikiteo is the tapas crawl from bar to bar seen across Spain, but it reaches its pinnacle in Donostia, with hundreds of people on the streets of the old town wandering from bar to bar, each known for its specialty, whether it be croquettes, tortilla, toast, or seafood. The txikiteo is also popular in cities such as Pamplona and Bilbao.

Gastronomic societies are organizations, almost always of men, who cook and eat together in a communal txoko. In large cities, the society’s premises can be large and formally organised, but the txoko is frequently a small space owned by a group of friends in smaller towns and suburbs, where food and costs are shared.

The first txoko was noted in Donostia in 1870. This unique feature of the Spanish Basque Country enables men to participate in the cooking process and spend time together away from the traditionally formidable matriarchs (etxekoandreak). In recent years, women have been allowed into some clubs.

In the 1970s and 1980s Basque chefs were influenced by the nouvelle cuisine of France and created the nouvelle cuisine basque, radically original in its form but solidly Basque in substance, with lighter and less rustic versions of traditional dishes and flavours. The first Spanish restaurant to be awarded 3 stars in the Michelin Guide was, in fact, Zalacaín, a Basque restaurant, although located in Madrid.

Juan Mari Arzak in Donostia became the most famous exponent and one of the first three-star Michelin Guide restaurants in Spain. In a few years the movement swept across Spain, becoming the state’s default haute cuisine. Many tapas bars, especially in San Sebastián, serve modern-style pintxos employing novel techniques and ingredients. In more recent years, young chefs, such as Martin Berasategui, have given new impetus to Basque cuisine.

Basque cuisine has continued to have an influence on international cuisine, particularly in Spain and France where it is highly regarded. Catalan chef Ferran Adrià has taken the techniques pioneered by Arzak and other Basque chefs to new heights.

At the other end of the scale, Basque-style pintxos bars are common in Barcelona and Madrid. In cities where large numbers of Basque people emigrated, such as Buenos Aires, Argentina; São Paulo, Brazil; Boise, Idaho; Elk, Nevada; Fresno, California, and Bakersfield, California, all have several Basque restaurants and a noted Basque influence on the local cuisine.

In Bakersfield, California, cooks at the legendary Pyrenees Cafe douse their Basque fried chicken with butter and garlic. The original source for this recipe was Cook’s Country and I have modified their version to be more authentically Basquaise.

That includes adding some ground bay leaf to the marinade, adding in some lard to the frying oil, adding both fresh oregano and fresh thyme flowers to the parsley and most importantly, adding some Basque ground red pepper (Piment d’Espelette) to the garnish of the chicken pieces.

Piment d’Espelett is a mildly-spicy chili pepper with a smoky flavor that is a staple ingredient in traditional Basque dishes. It is an exclusive to the commune of Espelette in the French Basque country – only peppers grown in the Espelette region may be labeled as Piment d’Espelette.

Piment d’Espelette is truly a mandatory spice in most Basque cooking, at least as far as TFD is concerned – you can purchase some of excellent quality from here. I have every confidence you will love this recipe as much as I do, !