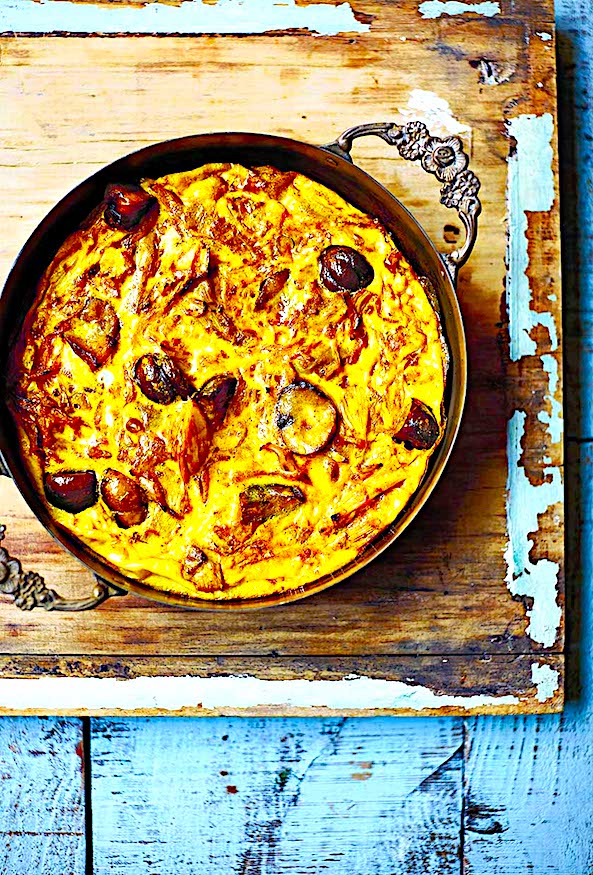 Citizens, today it is my privilege to educate you on one of the least-known ethnic groups in the World – the so-called “mountain Jews” of Azerbaijan and their famous recipe for Khoyagusht!

The Mountain Jews community became established in Ancient Persia, from the 5th century AD onwards; their language, called Judeo-Tat, is an ancient Southwest Iranian language which integrates many elements of Ancient Hebrew.

It is believed that they had reached Persia from Ancient Israel as early as the 8th century BCE. They continued to migrate east, settling in mountainous areas of the Caucasus. The Mountain Jews survived numerous historical vicissitudes by settling in extremely remote and mountainous areas. They were known to be accomplished warriors and horseback riders.

Mountain Jews are distinct from Georgian Jews of the Caucasus Mountains. The two groups are culturally different, speaking different languages and having many differences in customs and culture.

The Mountain Jews, or Jews of the Caucasus, have inhabited the Caucasus since the fifth century CE. Being the descendents of the Persian Jews of Iran, their migration from Persia proper to the Caucasus took place in the Sasanian era (224-651). It is believed that they had arrived in Persia, from Ancient Israel, as early as the 8th century BCE.

Other source, attest that mountain Jews were present in the region of Azerbaijan, at least since 457 B.C. The Bible tells about priests who had been brought from there. According to the Bible, prophet Ezra, sent delegates to Casiphia (located in Azerbaijan), asking for priests to serve in the Temple of God.

Mountain Jews have an oral tradition, passed down generation after generation, that they are descended from the Ten Lost Tribes which were exiled by the king of Assyria (Ashur), who ruled over northern Iraq from Mosul (across the Tigris River from the ancient city of Nineveh).

The reference, most likely is to Shalmaneser, the King of Assyria who is mentioned in II Kings 18:9-12. According to local Jewish tradition, some 19,000 Jews departed Jerusalem (used here as a generic term for the Land of Israel) and passed through Syria, Babylonia, and Persia and then, heading north, entered into Media.

In Chechnya, Mountain Jews partially assimilated into Chechen society by forming a Jewish teip, the Zhugtii while three other teips, the Shuonoi, Ziloi and Chartoi have also been theorized to have Jewish relations.

In Chechen society, ethnic minorities residing in areas demographically dominated by Chechens have the option of forming a teip in order to properly participate in the developments of Chechen society such as making alliances and gaining representation in the Mekhk Khell, a supreme ethnonational council that is occasionally compared to a parliament.

Mountain Jews maintain a strong military tradition. For this reason, some historians believe they may be descended from Jewish military colonists, settled by Parthian and Sassanid rulers in the Caucasus as frontier guards against nomadic incursions from the Pontic steppe.

And we, the Tats We, Samson warriors, Bar Kochba’s heirs… we went into battles and bitterly, heroically struggled for our freedom – From “The Song of the Mountain Jews”

Mountain Jews are known for their military tradition and have been historically viewed as fierce warriors. Some historians suggest that the group traces its beginnings to Persian-Jewish soldiers who were stationed in the Caucasus by the Sasanian kings in the fifth or sixth century to protect the area from the onslaughts of the Huns and other nomadic invaders from the east. Men were typically heavily armed and some slept without removing their weapons.

Over time, the Mountain Jews adopted the dress of their Muslim neighbors. Men typically wore chokhas and covered their head with papakhas, many variations of which could symbolize the men’s social status. Wealthier men’s dress was adorned with many pieces of jewelry, including silver and gold-decorated weaponry, pins, chains, belts, or kisets (small purse used to hold tobacco or coins).

Women’s dress was typically of simpler design in dark tones, made from silk, brocade, velvet, satin and later wool. They decorated the fabric with beads, gold pins or buttons, and silver gold-plated belts. Outside the house, both single and married women covered their hair with headscarves.

Mountain Jewish cuisine absorbed typical dishes from various peoples of the Caucasus, Azerbaijani and Persian cuisine, adjusting some recipes to conform to the laws of kashrut. Typical Mountain Jewish dishes include chudu (a type of meat pie), shashlik, dolma, kurze or dushpare, yarpagi, khinkali, tara (herb stew with pieces of meat), nermov (chicken or other meat stew with wheat and beans), plov (pilaf), buglame (curry like stew of fish or chicken eaten with rice (osh)), etc. Jewish holidays-themed dishes include Eshkene, a Persian soup, prepared for Passover, and a variety of hoshalevo (honey-based treats made with sunflower seeds or walnuts) typically prepared for Purim.

Citizens, this recipe for Khoyagusht that I am sharing with you is simple, delicious and a classic meal of the Mountain Jews. For a true feast of Azerbaijan, try this recipe of an amazing saffron beef soup with tiny dushbara (tortellini) recipe here.