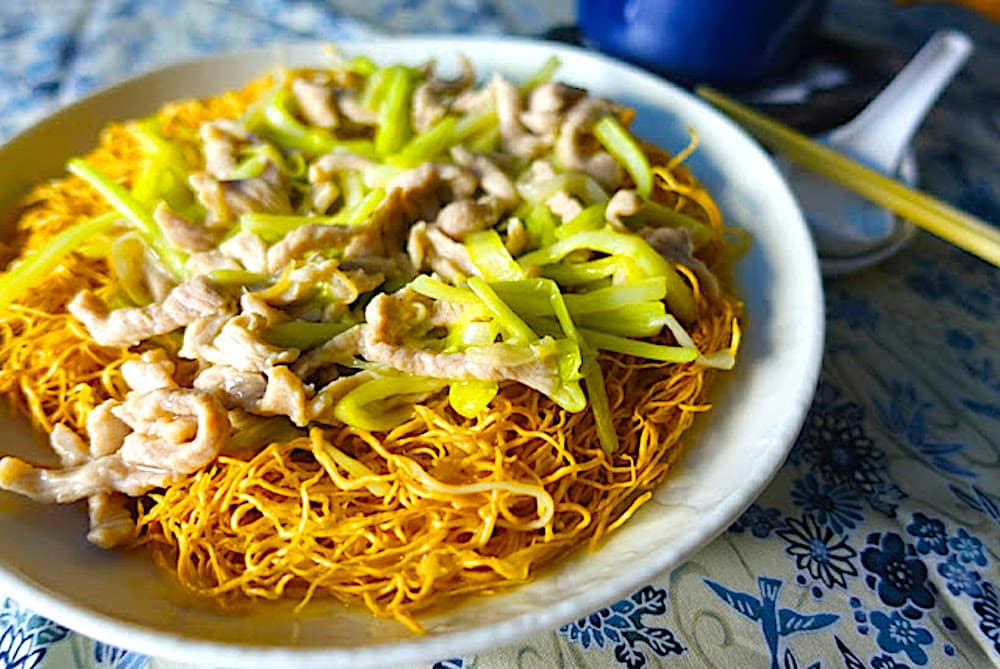 Citizens, sometimes part of my Divine purpose is to clear up etymologies and food histories just as much as sharing awesome recipes! This post definitely falls into the former category – it is time for me to teach you what “chow mein” actually is, and trust me – what you get at a cheap Chinese restaurant is ANYTHING but the real deal!

First off, while there is a dish called (in proper Anglicized Mandarin) “chau mien”, the proper way to order it is to call it ‘leung mein wong’, which literally translated means “two face yellow.” In other words, that the noodles have been browned on two sides. This makes my preferred version of this dish, which – unsurprisingly – is fried as opposed to steamed.

Chow mein 炒面; traditional Chinese: 炒麪) are Chinese stir-fried noodles, the name being the romanization of the Taishanese chāu-mèing. The dish is popular throughout the Chinese diaspora and appears on the menus of most Chinese restaurants – it is particularly popular in India, Nepal, the UK and the US.

The lightly pronounced Taishanese [ŋ], resembling the end of a Portuguese nasal vowel, was taken to be /n/ by English speakers. The Taishan dialect was spoken by migrants to North America from Taishan who started most of the early Chinese restaurants. Chow mein is first mentioned in the United States as early as 1920, in the novel Main Street by Sinclair Lewis.

In American Chinese cuisine, it is a stir-fried dish consisting of noodles, meat (chicken being most common but pork, beef, shrimp or tofu sometimes being substituted), onions and celery. It is often served as a specific dish at westernized Chinese restaurants. Vegetarian or vegan Chow Mein is also common. Alberta Ginger Beef is another example of a Westernized Chinese dish that is almost unrecognizable to most people from the mainland.

The bad reputation that chow mein has unfairly been slapped with can be traced back to two words and one company: “Chun King”.

In 1946, one of the first companies to market “chow mein” in a can was Chun King. The product’s creator was Jeno Paulucci, the son of Italian immigrants, who developed a recipe based mostly upon Italian spices that would be better catered to the food preferences of European immigrants and some Americans of similar ethnic origins.

To keep cost down, Paulucci ingeniously substituted expensive water chestnuts with lower cost celery stalks that were originally destined for cattle feed. Paulucci’s company became so successful selling canned chow mein and chop suey that President Gerald Ford quipped “What could be more American than a business built on a good Italian recipe for chop suey?” when praising Paulucci accomplishments with Chun King. After Paulucci sold Chun King in 1966, the company would be sold several more times more until it was dissolved in 1995.

By 1960, Paulucci described in The New York Times that “At Chun King we have turned out a ‘stew-type’ chow mein. I’d guess this type has been around for thirty – maybe forty – years. To make it, all the meat, seasonings and vegetables are dumped into a kettle and stewed for hours – until everything is cooked.”

This unholy blasphemy still sends a cold shiver of terror down the spine of anyone unfortunate enough to have tried it – but let’s move on to the real chow mein and put this sordid nightmare of culinary grief behind us, shall we?

There are two main kinds of real chow mein available on the market:

Many years ago, I frequented a fantastic food forum called eGullet, where many masters of different cuisines posted their wisdom. I happily quote several techniques from the chow mein thread there about how to get the proper taste and texture in the dish.

The flame around the edge of the wok: burning the peanut oil, is what gives Cantonese chow mein the characteristic “smoky” (sort of) flavor.

Well, I can’t flame the oil around the edges of the wok because I have an electric stove! I’ve found a trick to replicate the smoky taste is to stir-fry some scallion greens until they’re almost black before adding any of the meat or veggies — the burnt scallions also lend a characteristic “Chinese restaurant” taste to the food.

I always make sure my noodles are cooled and dried from boiling before frying. And, if overcooked in water, no amount of frying will make them firm or crisp again. I found it best to boil the noodles the day before, drained well and kept in the fridge.

Instead of browning on both sides, <some chefs> simply deep fry the whole thing until crisp. Both ways are delicious.

How ever you prepare your “Noodles” it requires a “Wok” set up with very high heat. “Peanut Oil” not the very refined type generally sold away from Hong Kong or China. If you have no options then add some “Toasted Peanut Oil”.

In most Restaurants in Asia for certain types of Chow Mein, it’s customary to first add some Diced Garlic and Sliced Ginger to the Hot Oil for a short time, then Strain before adding the Oil.

Citizens, my version of the true double-fried noodle dish is based closely on one from the doyenne of Chinese cuisine, Eileen Yin Fei Lo, who is a real stickler for authenticity when it comes to Chinese food. She claims this is “the true dish known in China as chau mien.”

I’ve tweaked it a bit, adding in some Chinese sausages (known as lap cheong) that I dearly love – you can easily omit it from the dish if you prefer a classic version of the recipe, or you can buy it here. I’ve adapted the pork marinade to include the classic Chinese rose-flavored liqueur known as Mei Kuei Lu Jiew – you can buy it here.

Dark soy sauce is NOT regular soy – you can buy it here. You can grab a good-quality oyster sauce here and excellent-quality dried shiitake mushrooms here.

This recipe will reinvigorate your appreciation for a dish that has been ill-served outside of China – I hope you enjoy it as I do, Citizens!