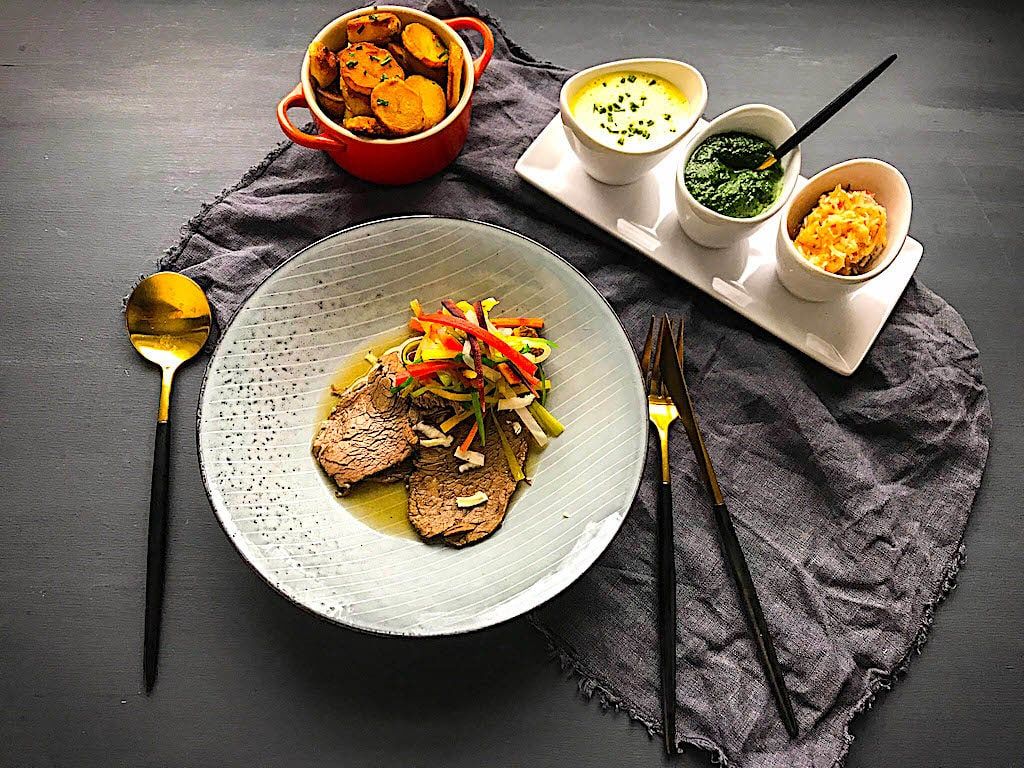 My Citizens! The noblesse origins and unbroken lineage of your Sovereign – the always regal TFD! – cannot be denied! With a palate worthy of any Emperor, Suzerain or Potentate, I have always been fascinated by recipes with a royal lineage.

This one is particularly unusual as it was a favorite dish of an Austro-Hungarian Emperor and the common folk – especially the Jews of Vienna! I speak of the noble Tafelspitz, which is basically boiled beef and vegetables.

You must now be thinking that TFD has been breathing gas oven fumes for far too long – but hear me out!

Tafelspitz (literally meaning tip (of meat) for the table) is boiled beef in broth, served with a mix of minced apples and horseradish. It is a classic dish of the Viennese cuisine and popular in all of Austria and the neighboring German state of Bavaria.

Franz Joseph I, Emperor of Austria, was a great lover of Tafelspitz. According to the 1912 official cookery textbook used in domestic science schools of the Austro-Hungarian Empire, “His Majesty’s private table is never without a fine piece of boiled beef, which is one of his favorite dishes.”

Tafelspitz is simmered along with root vegetables and spices in the broth. It is usually served with roasted slices of potato and a mix of minced apples and horseradish or sour cream mixed with chives.

Tafelspitz is the Austrian name of the meat cut which is used, usually from a young ox. This cut is typically known in the United States as the Standing Rump or Top Round, depending on the nomenclature of cuts used. The British cut would be called Topside. In Australia, it is called the Rump Cap.

It is the top hind end of the cattle where the tail originates. Alternatively, a similar cut of beef from a young ox, properly hung, with firm white fat (not yellow). The fat must be left on to prevent the meat from becoming dry.

The Emperor actually preferred the Kavalierspitz, a tender cut from the shoulder, over the more common tafelspitz cut from the upper leg. This was Kaiser Franz Josef’s favorite cut because it has gelatin running through the middle, so it stays very moist and juicy. It is sold in the United States as Yankee steak or chicken steak, and you’ll probably have to call ahead at a good butcher to get it.

In the course of my research for this post, I came across one of my new favorite food blogs – schibboleth.com!

It focuses on Jewish Viennese recipes with huge doses of history, scholarship, Vienna-based culture and Freudian anecdotes. I do not make recommendations like this lightly!

Here is a very excerpted highlight from Nino’s article regarding Tafelspitz:

THIS potentially dreary Viennese dish of boiled beef, called tafelspitz, is made here with high-grade cuts of meat, which are poached for hours to an almost unnatural tenderness, plated in a rich beef consommé, and served topped with sea salt crystals, chives, apple-horseradish and the contrasting texture of a crispy potato rösti cake.

The meat is so tender that Franz Joseph I of Austria (1830-1916) ate it only with a fork — leaving the emperor’s knife to be used as a mirror. (Did he check on his fabulous beard?) It also suited Sigmund Freud, the founder of psychoanalysis, when he suffered from jaw cancer. It is the very first meat recipe in the cookbook Deutsche Kochschule, which Freud offered to his wife Martha Bernays after their marriage.

Despite any preconceptions you might have about boiled beef, let me assure you that nothing is dry or grey in an authentic Viennese tafelspitz. Despite the name, it isn’t even technically boiled. The meat gets only very, very gently poached, gesotten as it’s called in Vienna.

Unfortunately, that doesn’t mean there is no such thing as bad tafelspitz. Among many others famous epicureans and gastronomes, Brillat-Savarin was horrified by the boiled beef he tried. Rightly so, for a meat so brutally cooked down to nothing but dry, flavorless shreds of an unsightly grey mass.

The Emperor Franz Joseph I of Austria and King of Hungary ate tafelspitz almost every day for dinner. In his menu, it was noted in French as pièce de boeuf garnie.

His predecessors had loved boiled beef and beef bouillon as well, including Empress Maria Theresa, the mother of Marie Antoinette. In the late 19th century and early 20th, anybody wishing to express his loyalty to the empire had tafelspitz too, mostly for lunch. Even with its royal connotations, beef also happened to be very affordable for most Viennese.

Arguably, in this fin-de-siècle ambiance, tafelspitz was not only a dish but a lifestyle and a political statement. An average bourgeois household in the Austro-Hungarian empire ate poached beef with its accompanying garnishes and bouillon every Monday through Thursday up to the end of the Second World War.

Sigmund Freud too was known for his predilection for Viennese imperial boiled beef. Like the emperor, the Freuds and other Jewish families, more or less assimilated, ate beef bouillon and its meat with different sides and sauces up to four times a week.

In this sense, tafelspitz was the taste of a Jewish mother’s kitchen, but in another sense, it was also a token of mainstream Viennese society. Thus, it was the flavor of Jewish assimilation.

The Jews of the empire have been Franz Joseph’s exemplary subjects moving and settling all over the empire’s multicultural territories, speaking its multiple languages, being cosmopolitan, turning towards the authority for protection and even reciting prayers for the state and its regent on every occasion. 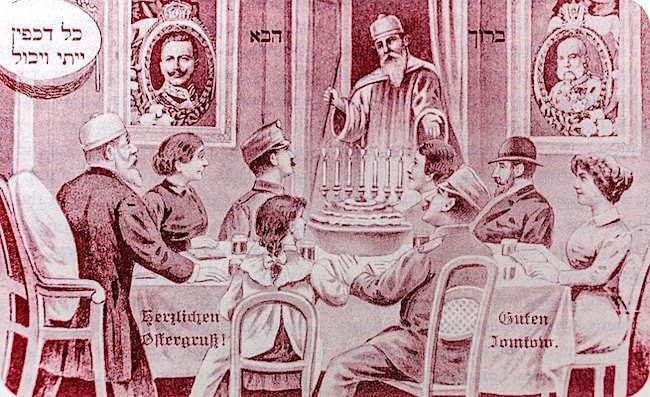 Hardly any dish is more appropriate for the Seder than this elegant boiled beef traditionally accompanied by horseradish. No doubt this loyal family will eat tafelspitz for the Seder in their typical Austro-Hungarian home, with portraits of Archduke Franz Ferdinand and Emperor Franz Joseph on the wall and the Prophet Elijah at the door (in Claudia Roden, “The Book of Jewish Food“; New York: Knopf, 1996; p.51). Used by gracious permission from schibboleth.com

There have been many heated (bad pun) discussions whether or not to put the meat in already hot or cold broth. Before the modern era, the broth was previously heated so that the pores of the meat would close, preventing the meat from drying out. Today, stoves heat up so fast that you can start it cold.

It is EXTREMELY important that the broth does not boil while cooking, or the meat will become chewy. The temperature of the broth must always remain below the boiling point. Therefore, it takes some time, but the meat is tender and juicy.

The dish is typically served with the broth from boiling the meat, spooned over the rolled-up and then chiffonade-cut pancakes known as Fritatten in Austria, and Flädle in some parts of southern Germany where they are a popular add-on for clear beef broths.

The sides are all delectable, including spinach and potatoes and two delectables sauces – one based on apples and horseradish and the other a white sauce, both of which complement the meat incredibly well.

My version of this classic Imperial recipe is drawn from several sources, including the celebrated Plachutta Wollzeile restaurant in Vienna. The directions and techniques for the meat and vegetables are from the previously lauded schibboleth.com.

If you are unable to find a butcher who can provide you with a Yankee steak or a bottom-round rump with the fat cap attached, you can use a second-cut beef brisket but it won’t have quite the same texture.

This recipe looks incredibly complicated, but fear not my Citizens, most of it is no-cook and is staged in several parts over several days for the beef, stock and sides. There may be simpler versions of this recipe, but none of them are worthy of an Imperial palate – mine is.

This is – without any doubt – a fantastic meal for the upcoming Passover Seder if you are Jewish! If you do make this for Pesach, however – be sure NOT to use the shredded crepe portion of the recipe in the soup as it probably isn’t kosher for Passover. This recipe, however, is. 🙂 If you keep Kosher in general, please find an alternate recipe for the spinach that doesn’t use cream, as this would be mixing milk and meat in the same meal. 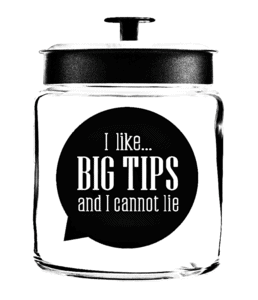 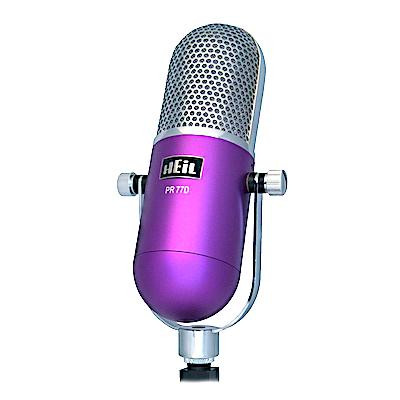