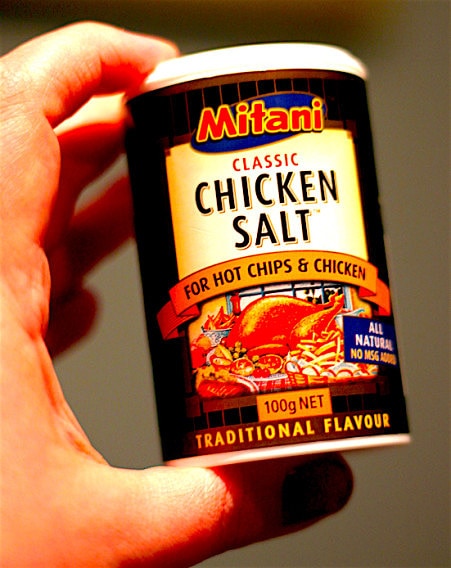 Citizens, I give you my personal recipe for the great seasoning sensation from Down Under – Chicken salt! It is nothing less than a seasoned salt made with herbs and spices and sold in supermarkets throughout the region. It is most commonly associated with fish and chip shops and other take-away food shops.

As noted in a most erudite article that I discovered on australianfoodtimeline.com.au:

Chicken salt is as Australian as Vegemite, although with a shorter history. It was invented by Peter Brinkworth in the early 1970s, as seasoning for the roast chickens he sold in his Gawler, South Australia, chicken shop.

The Mitani family bought Brinkworth’s business in 1979 and, with it, acquired the recipe for chicken salt. The seasoning went on to become the preferred sprinkle for hot chips across Australia. In 1979, Mitani began to sell the product commercially to the take-away food industry.

The Mitani version today lists its ingredients as: Sea Salt (82%), Rice Flour, Spices, Vegetable Powders (Onion, Garlic Natural Flavour, Yeast Extract and Anticaking Agent (551). It is halal, gluten free, suitable for vegetarians and contains no MSG and, clearly, no chicken. Brinkworth claims that it’s not a patch on his original recipe.

Although Mitani claims to have been the originator of chicken salt and were no doubt responsible for its progress through the fish and chip shops of Australia, they now have competitors. Not all recipes sound quite so benign.

Other manufacturers are Saxa, Masterfoods and Nice N’ Tasty and all their recipes are slightly different. Most don’t identify the spices they use and include a generic mention of “flavours”. Perhaps most famous for a special salt mix on fries is KFC (aka Kentucky Fried Chicken).

Online forums are full of fans wanting to get their hands on the KFC salt mix and being advised that they only way to do it is to have a mate who works there steal some for you. It turns out that this salt mix is also unique to Australia, with the American KFCs using plain salt.

For the record, chicken salt, as sold in Australia and New Zealand, generally does contain chicken extracts, which are typically listed as the second ingredient after salt. It is therefore not suitable for vegetarians and it is not related to the chicken flavoring or seasoning that is found on potato crisps, although it can be similar in appearance (both have a slight yellow coloring).

Chicken salt is pretty much fantastic on anything where you want a savory, salty flavor – I’ve upped the umami flavor with two different kinds of mushroom powders as well as some ground-up chicken bouillon cube. That said, the majority of the chicken flavor does indeed come from ground-up roasted chicken skins cooked down in real chicken stock. The slight yellow color is from the bouillon cube and turmeric and is traditional for this blend.

Basically, I have every confidence that this recipe will become the new “secret weapon” in your flavor arsenal, provided to you courtesy of TFD! 🙂