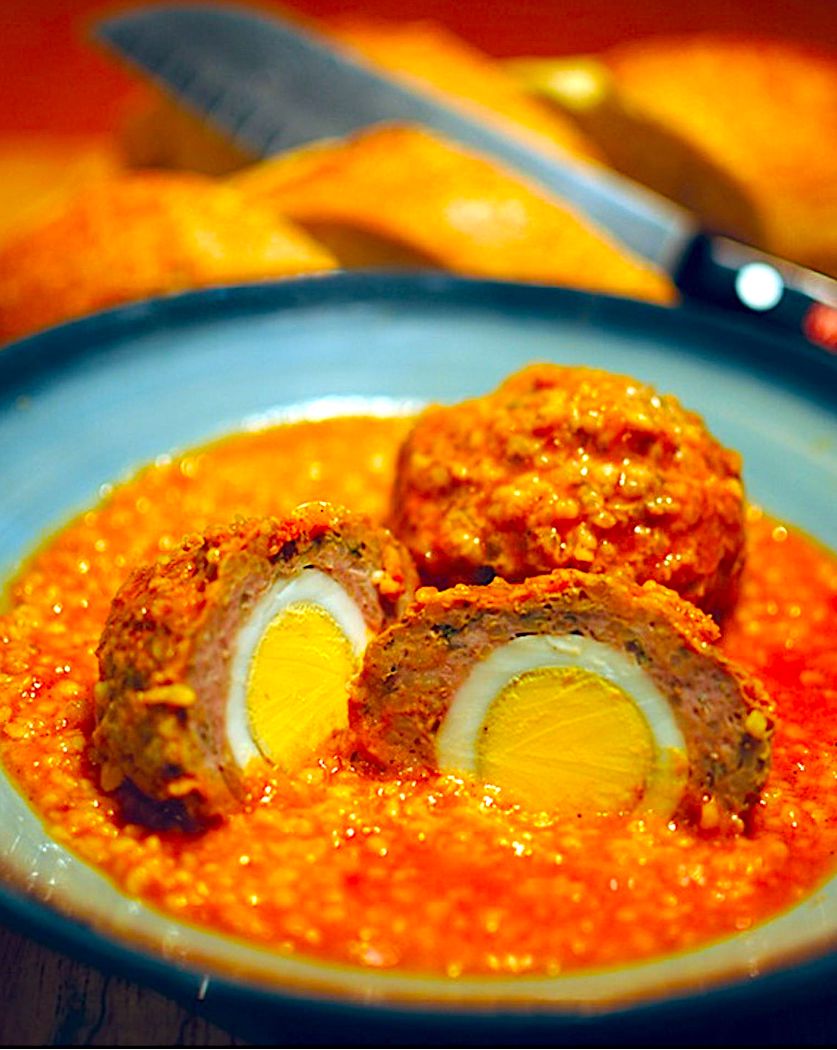 My American Citizens – please allow your Potentate of Pilgrims, the Thane of Thanksgiving who ALONE is TFD to wish you a happy turkey day as we hunker down for what we all sincerely hope are the final months of the COVID-19 pandemic! This is a lonely Thanksgiving for the vast majority of us who are (wisely) following the CDC’s recommendations to stay home – but fear not, for I shall stand with you virtually and share not ANOTHER set of standard recipes for the holiday but something unique, rare and special on this day! I speak of nothing less than Assyrian chipteh soup and this is a special recipe indeed.

As some of you who have been following the blog since the beginning back in December of 2015 remember, I was an ancient history major in college and the Assyrian Empire was a source of fascination for me back then – and now today, I shall share a recipe from their modern-day descendants (at least according to some sources!). Allow me to take you on a journey back in time as I educate you first on the Assyrian Empire of yore before talking about the modern-day Assyrians – and for God’s sake NEVER call them Arabs or Muslims, for they are neither! So – let’s talk history and chipteh, shall we? 🙂

Assyria, also called the Assyrian Empire, was a Mesopotamian kingdom and empire of the ancient Near East that existed as a state from perhaps as early as the 25th century BC (in the form of the Aššur city-state) until its collapse between 612 BC and 609 BC – spanning the periods of the Early to Middle Bronze Age through to the late Iron Age. This vast span of time is divided into the Early Period (2500–2025 BC), Old Assyrian Empire (2025–1378 BC), Middle Assyrian Empire (1392–934 BC) and Neo-Assyrian Empire (911–609 BC).

A largely Semitic-speaking realm, Assyria was centered on the Tigris in Upper Mesopotamia. The Assyrians came to rule powerful empires in several periods. Making up a substantial part of the greater Mesopotamian “cradle of civilization”, which included Sumer, the Akkadian Empire, and Babylonia, Assyria reached the height of technological, scientific and cultural achievements for its time. At its peak, the Neo-Assyrian Empire of 911 to 609 BC stretched from eastern Libya and Cyprus in the East Mediterranean to Iran, and from present-day Armenia and Azerbaijan in the Transcaucasia to the Arabian Peninsula.

The name “Assyria” originates with the Assyrian state’s original capital, the ancient city of Aššur, which dates to c. 2600 BC – originally one of a number of Akkadian-speaking city-states in Mesopotamia. In the 25th and 24th centuries BC, Assyrian kings were pastoral leaders. From the late 24th century BC, the Assyrians became subject to Sargon of Akkad, who united all the Akkadian- and Sumerian-speaking peoples of Mesopotamia under the Akkadian Empire, which lasted from c. 2334 BC to 2154 BC.

The region of Assyria fell under the successive control of the Median Empire of 678 to 549 BC, the Achaemenid Empire of 550 to 330 BC, the Macedonian Empire (late 4th century BC), the Seleucid Empire of 312 to 63 BC, the Parthian Empire of 247 BC to 224 AD, the Roman Empire (from 116 to 118 AD) and the Sasanian Empire of 224 to 651 AD. The Arab Islamic conquest of the area in the mid-seventh century finally dissolved Assyria (Assuristan) as a single entity, after which the remnants of the Assyrian people (by now Christians) gradually became an ethnic, linguistic, cultural and religious minority in the Assyrian homeland, surviving there to this day as an indigenous people of the region.

Modern-day Assyrians (ܣܘܪ̈ܝܐ, Sūrāyē) are an ethnic group indigenous to Mesopotamia, a region in the Middle East. Some self-identify as Syriacs, Arameans, and Chaldeans. Speakers of the Neo-Aramaic branch of Semitic languages as well as the primary languages in their countries of residence, modern Assyrians are Syriac Christians who claim descent from Assyria, one of the oldest civilizations in the world, dating back to 2500 BC in ancient Mesopotamia.

The tribal areas that form the Assyrian homeland are parts of present-day northern Iraq (Nineveh Plains and Dohuk Governorate), southeastern Turkey (Hakkari and Tur Abdin), northwestern Iran (Urmia) and, more recently, northeastern Syria (Al-Hasakah Governorate). The majority have migrated to other regions of the world, including North America, the Levant, Australia, Europe, Russia and the Caucasus during the past century.

Emigration was triggered by events such as the Massacres of Diyarbakır, the Assyrian Genocide (concurrent with the Armenian and Greek Genocides) during World War I by the Ottoman Empire and allied Kurdish tribes, the Simele Massacre in Iraq in 1933, the Iranian Revolution of 1979, Arab Nationalist Ba’athist policies in Iraq and Syria, the rise of Islamic State of Iraq and the Levant (ISIL) and its takeover of most of the Nineveh Plains.

Assyrians are predominantly Christian, mostly adhering to the East and West Syrian liturgical rites of Christianity. The churches that constitute the East Syrian rite include the Chaldean Catholic Church, Assyrian Church of the East, and the Ancient Church of the East, whereas the churches of the West Syrian rite are the Syriac Orthodox Church and Syriac Catholic Church. Both rites use Classical Syriac as their liturgical language.

Most recently, the post-2003 Iraq War and the Syrian Civil War, which began in 2011, have displaced much of the remaining Assyrian community from their homeland as a result of ethnic and religious persecution at the hands of Islamic extremists. Of the one million or more Iraqis reported by the United Nations to have fled Iraq since the occupation, nearly 40% were Assyrians even though Assyrians accounted for only around 3% of the pre-war Iraqi demography. Due to the emergence of ISIL and the taking over of much of the Assyrian homeland by the terror group, another major wave of Assyrian displacement has taken place.

The Assyrians suffered a number of religiously and ethnically motivated massacres throughout the 17th, 18th and 19th centuries, culminating in the large-scale Hamidian massacres of unarmed men, women and children by Muslim Turks and Kurds in the late 19th century at the hands of the Ottoman Empire and its associated (largely Kurdish and Arab) militias, which further greatly reduced numbers, particularly in southeastern Turkey.

The most significant recent persecution against the Assyrian population was the Assyrian genocide which occurred during the First World War. Between 275,000 and 300,000 Assyrians were estimated to have been slaughtered by the armies of the Ottoman Empire and their Kurdish allies, totaling up to ⅔ of the entire Assyrian population.

Since the Assyrian genocide, many Assyrians have left the Middle East entirely for a more safe and comfortable life in the countries of the Western world. As a result of this, the Assyrian population in the Middle East has decreased dramatically. As of today there are more Assyrians in the diaspora than in their homeland. The largest Assyrian diaspora communities are found in Sweden (100,000), Germany (100,000), the United States (80,000), and in Australia (46,000).

By ethnic percentage, the largest Assyrian diaspora communities are located in Södertälje in Stockholm County, Sweden, and in Fairfield City in Sydney, Australia, where they are the leading ethnic group in the suburbs of Fairfield, Fairfield Heights, Prairiewood and Greenfield Park. There is also a sizable Assyrian community in Melbourne, Australia (Broadmeadows, Meadow Heights and Craigieburn). In the United States, Assyrians are mostly found in Chicago (Niles and Skokie), Detroit (Sterling Heights, and West Bloomfield Township), Phoenix, Modesto (Stanislaus County) and Turlock.

Furthermore, small Assyrian communities are found in San Diego, Sacramento and Fresno in the United States, Toronto in Canada and also in London, UK (London Borough of Ealing). In Germany, pocket-sized Assyrian communities are scattered throughout Munich, Frankfurt, Stuttgart, Berlin and Wiesbaden. In Paris, France, the commune of Sarcelles has a small number of Assyrians. Assyrians in the Netherlands mainly live in the east of the country, in the province of Overijssel. In Russia, small groups of Assyrians mostly reside in Krasnodar Kray and Moscow.

To note, the Assyrians residing in California and Russia tend to be from Iran, whilst those in Chicago and Sydney are predominantly Iraqi Assyrians. More recently, Syrian Assyrians are growing in size in Sydney after a huge influx of new arrivals in 2016, who were granted asylum under the Federal Government’s special humanitarian intake. The Assyrians in Detroit are primarily Chaldean speakers, who also originate from Iraq. Assyrians in such European countries as Sweden and Germany would usually be Turoyo-speakers or Western Assyrians.

Now that you have a firm and unassailable grounding in the history of the Assyrian Empire and its modern-day descendants, let’s talk about chipteh, shall we?

Chipteh is a traditional Assyrian dish known to most Assyrian households. It is fantastic on cold winter evenings with some fresh crusty bread or pita for dipping. Each chipteh meatball has a hard boiled egg inside (very much like the German recipe known as Klops or Scotch eggs) and the thick soup base is a mixture of tomato and cracked wheat. Note that chipteh calls for two grades of bulgur wheat: a fine and coarse grade, buy them at their respective links.

All of the other ingredients for chipteh are easily found in your local grocery store – and know that this is one delicious bowl of stew! Not everything on Thanksgiving needs to be related to the American tradition – the key point of the holiday is to be THANKFUL for what you have, and the Assyrians have had a hard time of it for centuries. They deserve what peace they have found and as such, I hope this Thanksgiving you will join me in being thankful these living links to the past remain steadfast and strong in their history and bright future!