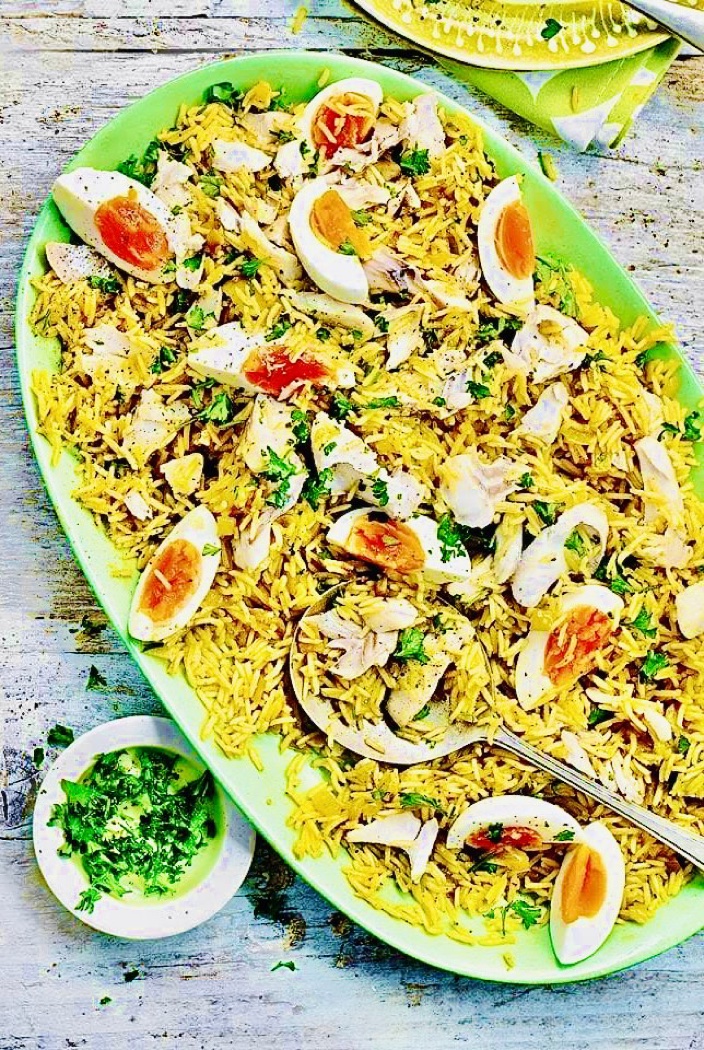 My Citizens, it is with deep sorrow that I note the recent passing of Prince Philip of the United Kingdom – His Royal Highness the Duke of Edinburgh, Earl of Merioneth, and Baron Greenwich. Passing at 99 years of age on April 9, the 99th day of the year at 9:00 AM (that’s a lot of 9’s!!!), Prince Philip lived life to the fullest and contributed to many charities over his lifetime and he was also a Freemason – as I Myself am.

Given this period of Commonwealth mourning (and My own mourning the excruciating pain of a kidney stone, as noted in My previous post), I feel it is appropriate to share the favorite comfort food of Prince Philip and the Queen throughout their nearly 74-year marriage – an Anglo-Indian breakfast food known as kedgeree (more on this shortly).

First, if you’re unfamiliar with Prince Philip’s life accomplishments, this article from the BBC is a good place to start. Now, as to his biography:

Philip was born into the Greek and Danish royal families. He was born in Greece, but his family was exiled from the country when he was eighteen months old. After being educated in France, Germany and the United Kingdom, he joined the British Royal Navy in 1939, aged 18. From July 1939, he began corresponding with the then thirteen-year-old Princess Elizabeth, whom he had first met in 1934. During the Second World War he served with distinction in the Mediterranean and Pacific Fleets.

After the war, Philip was granted permission by George VI to marry Elizabeth. Before the official announcement of their engagement in July 1947, he abandoned his Greek and Danish titles and styles, became a naturalized British subject, and adopted his maternal grandparents’ surname of Mountbatten. He married Elizabeth on 20 November 1947.

Just before the wedding, he was granted the style His Royal Highness and created Duke of Edinburgh, Earl of Merioneth, and Baron Greenwich by King George VI. Philip left active military service when Elizabeth became queen in 1952, having reached the rank of commander, and was made a British prince in 1957.

Philip had four children with Elizabeth: Charles, Prince of Wales; Anne, Princess Royal; Prince Andrew, Duke of York; and Prince Edward, Earl of Wessex. Through a British Order in Council issued in 1960, descendants of the couple not bearing royal styles and titles can use the surname Mountbatten-Windsor, which has also been used by some members of the royal family who do hold titles, such as Anne, Andrew and Edward.

A sports enthusiast, Philip helped develop the equestrian event of carriage driving. He was a patron, president or member of over 780 organizations, and he served as chairman of The Duke of Edinburgh’s Award, a self-improvement program for young people aged 14 to 24.

He was the longest-serving consort of a reigning British monarch and the longest-lived male member of the British royal family. He retired from his royal duties on 2 August 2017, aged 96, having completed 22,219 solo engagements and 5,493 speeches since 1952. Philip died on 9 April 2021, two months before his 100th birthday.

As a Freemason, Prince Philip started his life in Freemasonry in 1952, at the age of 31, when he was initiated into Navy Lodge, No 2612. A statement from the United Grand Lodge of England on the occasion of his passing added:

“In March 1953, Prince Philip progressed to the Second Degree of Freemasonry, before advancing to the Third Degree in May 1953. The United Grand Lodge of England (UGLE) issued his Grand Lodge Certificate the same month and he remained a member to this day.

The Duke of Edinburgh was patron or president of some 800 organisations, and took a special interest in scientific and technological research and development, the encouragement of sport, the welfare of young people, and conservation and the environment. Freemasons can also count other members of the Royal Family among their number, including HRH the Duke of Kent, who is the longest-serving Grand Master of the UGLE.”

“The Duke of Edinburgh was known to drop into meetings at his Freemasons Lodge almost unannounced. “Navy Lodge has a storied past and an amazing roster of luminaries appear upon its membership roll.

“The Lodge prides itself on being the premier Naval Lodge in the world, with an unparalleled history that includes four monarchs as past members – King Edward VII, King Edward VIII, King George VI and King George II of the Hellenes.”

Truly a man of humility and decency, no matter how you may feel about the Monarchy!

Now, let us move on to the somewhat unusual breakfast dish known as kedgeree! As noted earlier, it is the Queen’s favorite breakfast, as noted in this excepted article from hellomagazine.co.uk:

It’s known that the Queen enjoys a good breakfast at the palace – from tea and biscuits to cereal, toast and occasionally a plate of kippers.

Now her former royal chef, Darren McGrady, has revealed another of the monarch’s favourite breakfast dishes, which sounds rather tasty indeed.

In a new video on his YouTube channel, Darren shows viewers how to cook smoked haddock kedgeree that he served to Her Majesty at Buckingham Palace. The chef describes the meal as: “The ultimate Victorian culinary decadence.”

Darren says in the video: “One of the most popular breakfast dishes that I cooked for the royal family – one of their favourites and mine too – is a dish called kedgeree. It’s the ultimate comfort food dish that was brought over to the Victorians in the era of the Raj by the returning British colonials.”

So why haddock in particular? Darren explains: “In 1800s London salmon was rare. It just wouldn’t survive the stagecoach journey south from Scotland. Haddock however was cured and smoked and arrived perfect, thus becoming the fish for the dish.”

The dish can be eaten hot or cold. Other fish can be used instead of haddock such as tuna or salmon, though these are not traditional.

Kedgeree is thought to have originated with the Indian rice-and-bean or rice-and-lentil dish khichri, traced back to 1340 or earlier. It is widely believed that the dish was brought to the United Kingdom by returning British colonials who had enjoyed it in India and introduced it to the UK as a breakfast dish in Victorian times, part of the fashionable Anglo-Indian cuisine.

The dish was listed as early as 1790 in the recipe book of Stephana Malcolm of Burnfoot, Dumfriesshire. The National Trust for Scotland’s book The Scottish Kitchen by Christopher Trotter notes the Malcolm recipe and other old examples, expressing the belief that the dish was devised by Scottish regiments hankering for the tastes of India.

Hobson-Jobson cites Ibn Battuta (c. 1340) mentioning a dish of munj (moong) boiled with rice called kishrī and cites a recipe for khichri from Ain-i-Akbari (c. 1590). In Gujarat, where khichdi remains popular, the lentil and rice dish is usually served with kadhi, a spiced yogurt dish that can be mixed with the khichdi.

Khichdi is usually not prepared with fish in Gujarat, although fish is sometimes eaten with khichdi in coastal villages where seafood is plentiful. According to Hobson-Jobson, while fish is eaten with kedgeree, the use of the term for “mess of re-cooked fish … is inaccurate”.

Mughal Emperor Aurangzeb, was fond of the Alamgiri Khichdi, a spin-off Khichdi featuring fish and boiled eggs. Later, during the colonial era, this version of Khichdi would go on to be called kedgeree by the British who took this recipe back to their country. By the 19th century, Kedgeree had become a sophisticated breakfast/brunch dish in England.

I have taken My kedgeree recipe much closer back to its Indian roots – using classic spices such as cinnamon leaf which is a flavoring in Indian biryani rice dishes as well as adding back in apropos spices such as ginger and garlic. HRH Queen Elizabeth II is known to forbid garlic in any dishes served to Her as she loathes strong, lingering spices. She would not approve of My changes, but if YOU do cinnamon leaves can be purchased from here.

However, while I prefer more Indian in my Anglo-Indian food, I still salute the Victorian version of Kedgeree by using the classic Madras curry powder (a bastardized garam masala created by Indian cooks for their British masters and which has no place in proper Indian cuisine), easily purchased on Amazon here, as well as heavy cream and peas.

Citizens, the passing of Prince Philip is a sad day indeed, but I hope knowing his favorite breakfast meal helps to humanize the Royal so you can mourn the man. This flavorsome throwback breakfast would also be even more delicious served with another recipe from the Victorian era – the nearly lost Colonel Skinner’s Spicy Mango Chutney!