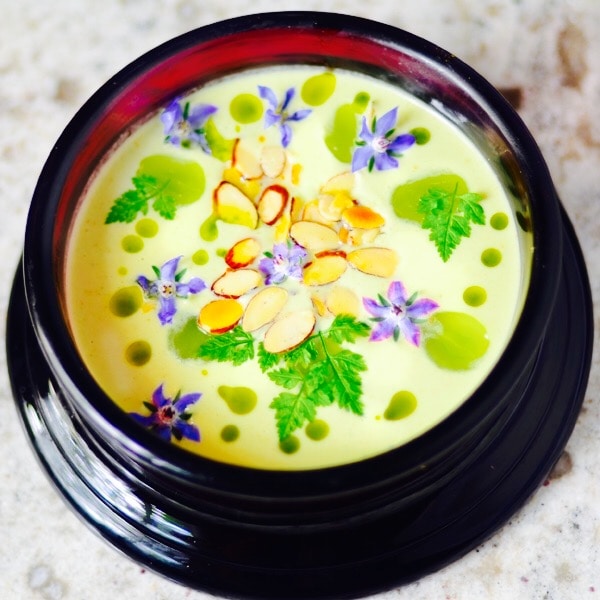 Andalucian ajo blanco is usually served with grapes or slices of melon. When almonds were not available, for instance during the post-war period, flour from dried beans was used.

Ajo blanco is sometimes referred to as “white gazpacho.” Every year in the town of Almáchar, Málaga, a festival is held on September 2nd to celebrate Andalusian ajo blanco.

The dish possibly has its origins in the Al-Andalus cuisine, given that almonds are the main ingredient of the dish. Either Seville or Málaga invented the dish, although its exact origin is unknown.

Extremaduran ajoblanco (ajoblanco extremeño) is a related though somewhat different dish, since it contains egg yolk in the emulsion apart from water, olive oil, garlic and bread and while vegetables such as tomatoes or cucumbers may be added, it doesn’t usually contain almonds. The dish has its origins in the Roman cuisine, which was introduced the Roman Province of Hispania. It would eventually become a traditional dish of Andalucía.

My version of this Andalucian recipe involves quick pickling the grapes in 2 different mild vinegars, an herb-infused olive oil and a fried wafer of Spanish ham and a garnish of both chervil leaves and borage flowers.

Citizens, I believe you will find my version to be both firmly grounded in tradition as well as innovating in new ways. This is by far one of the most refreshing soups in my entire, vast culinary database of tens of thousands of recipes – I hope you will see fit to add it to your own repertoire at the earliest opportunity!