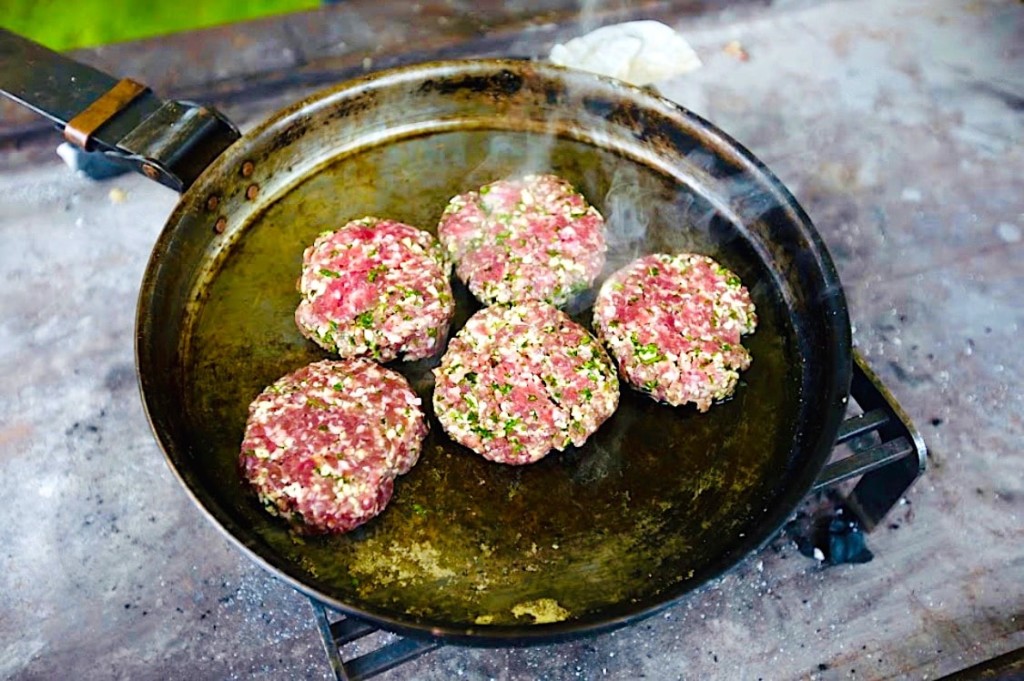 Citizens, the antiquarian and the gastronome have perfectly fused in the persona of the mighty TFD – none can match my passion for both of these topics – although the people at museumcrush.org give me a run for the money! 🙂

As noted in their article that sparked the desire to document and enhance this recipe:

Did Romans really invent the burger?

Rightly or wrongly, the Romans have been credited with bringing many things to Britain: from roads and pavements to heated baths and indoor plumbing. But a new discovery is giving them credit for a quintessentially American invention – the beef burger.

A recipe from the ancient Roman cookbook, Apicius, written by an unknown author during the late 4th or 5th centuries AD, details a dish called ‘Isicia Omentata’ made of minced meat, pepper, wine, pine nuts and a rich fish-based sauce (Garum), all formed into a patty.

The Roman delicacy, which bears more than a passing resemblance to the modern day burger, will be served up at Birdoswald Roman Fort on Hadrian’s Wall this weekend so that visitors can make up their own mind – and taste the ‘Roman Burger’ for the first time in 1,000 years.

It has long been known that the Romans brought ‘fast food joints’ – or thermopolia as they called them – to Britain. In large towns people wanted access to quick food during their lunch break and vendors selling chicken legs, lamb chops and shellfish became commonplace.

“We all know that the Romans left a huge mark on Britain, fundamentally altering the British diet forever,” says Food Historian Dr Annie Gray. “Street food became available en masse, and many of our favourite foods were introduced, including Isicia Omentata, what can be seen as the Roman forefather to today’s burger.”

According to Dr Gray, the Roman burger was “decidedly more upmarket” than many of today’s offerings, with a “richer and more complex” recipe than the plain beef version most common today.

“Since our ‘Roman Burger’, other similar recipes can be seen throughout history,” she adds. “There were the more flat or meatball-like Medieval ‘Pompeys’ or ‘Rissoles’, Georgian ‘Patties’ which popularised fried mince meat, and, by the end of the Victorian era, we see the first proper Hamburger. Burgers aren’t a modern invention – rather, a staple throughout the centuries that has evolved.”

More than 10,000 soldiers would have been based at forts such as Birdoswald at the peak of Roman occupation along Hadrian’s Wall. Having access to tasty, convenient food was vitally important as they patrolled the frontier and vendors serving fast food would have been commonplace in large towns.

Citizens, I’ve tweaked the recipe to include some fresh lovage, an herb tasting of celery that was very popular in ancient Roman recipes and rounds this version out nicely to my palate. I also spec the use of asafœtida (I spell it the old way with a ligature). Asafœtida is a dried resin used in Indian cuisine that tastes strongly of garlic. It’s a replacement for a lost Roman herb called Silphium.

As noted on the intriguing site www.romanobritain.org:

Silphium, was an herb much-prized by Roman cooks which came from the former Greek colony of Cyrenaica — which was located in what is now the Eastern coastal region of Libya.

To make an ounce of silphium last longer, the cookbook of Apicius recommends keeping it in a jar of pine-nuts, Possible Silphium (Giant Tangier Fennel)which would then absorb the flavour, much as a vanilla pod is used today in a jar of sugar.

After the First Century A.D., Silphium seems to have become unobtainable and Pliny reported that the last known stalk of silphium that was found in Cyrenaica was given to the Emperor Nero “as a curiosity” — which, according to some accounts, he promptly ate.

After the decline of silphium, substitute herbs such as Asafoetida were then often used in place of Silphium. Silphium was long considered extinct, but is thought to possibly be the Giant Tangier Fennel (Ferula tingitana), but that is not a universal belief and there is much to disprove this notion (not the least of which the plant doesn’t really look like the ancient depictions)… You’ll probably have to just do like they did and use Asafoetida.

You can find excellent-quality whole chunk asafœtida here. Please grind up a TINY amount to a powder in a spice grinder – a TINY pinch is more than enough, trust me!

Caul fat is an awesome fat membrane that wraps the burgers and keeps them juicy as well as crisping up deliciously during cooking! Your butcher can order some for you. Garum is a condiment that was beloved by the Romans (they used it in practically EVERYTHING) and is best replaced by top-quality fish sauce. This is my choice.

Ironically, this will taste VERY southeast Asian to a modern-day palate – and it is supremely delicious! Make these at your next weekend BBQ and regale your guests with its history as they regale YOU with compliments!

Enjoy this delicious taste of antiquity, my Citizens!

Add
211shares
TFD uses cookies and we comply with GDPR so you control your personal info! If you continue on, we will assume you are happy with this, Citizen! OkNoRead more