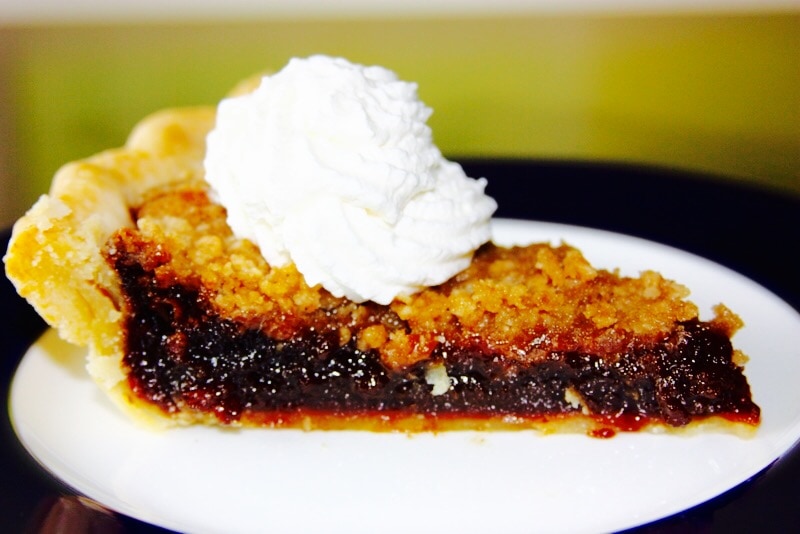 Citizens! I once spent an idyllic week on an Amish farm in Lancaster, PA when I was 5 – until my mother apparently almost got us both killed by an angry Amishman who was infuriated by her trying to take his picture against his wishes.

Needless to say, this put a quick end to my Amish outing – still, the Amish really know how to put on a feed and I think my time with them influenced and in fact instilled my own ability to cook for dozens of people…or so I like to tell myself.

Shoofly pie is perhaps the most iconic Amish recipe – as noted on www.foodtimeline.org:

“Shoofly pie has such an interesting name, it must have an equally interesting history. It certainly does!

Many food history reference books attribute the origin of shoofly pie to the Pennslyvania Dutch. A closer examination of culinary evidence suggests this group may be able to claim the name, but maybe not the recipe.

This resiliant sugar-based formula is capable of adapting through the ages according to ingredient availability and cook ingenuity. Food historians tell us sugar-filled pastries originated in the Ancient Middle East. Sweet treacle pies were popular all over Medieval Europe. Renaissance diners preferred similar compostions made with fine white sugar.

These recipes were introduced to America by European settlers from several nations. Molasses was often substituted for treacle in colonial American recipes. Some folks say the “original shoofly recipe” is descended from Centennial cake. Both desserts have striking similarities.

WHY SHOOFLY? According to the book Rare Bits, Unusual Origins of Popular Recipes, by Patricia Bunning Stevens (p. 262) shoofly pie was created when “the pie-loving Pennsylvania Dutch …found themselves short of baking supplies in the late winter and early spring…all that was left in the pantry were flour, lard, and molasses.

From these sparse ingredients they fashioned Shoo-Fly Pie and found that their families liked it so well that they soon made it all year round. The unusual name is presumed to come from the fact that pools of sweet, sticky molasses sometimes formed on the surface of the pie while it was cooling, inevitably attracting flies.”

According to the The Encyclopedia of American Food & Drink, by John Mariani (p. 293) the term “Shoo Fly Pie” was not recorded in print until 1926.

“In American cuisine, shoofly pie is a sort of treacle tart, made with molasses or brown sugar and topped with a sugar, flour, and butter crumble. It’s name is generally taken to be an allusion to the fact that it is so attractive to flies that they have to be constantly shooed away from it, but the fact that it originated as a Pennsylvania-Dutch specialty suggests the possibility that shoofly is an alteration of an unidentified German word.”

WHAT IS AMISH SHOOFLY?

There are two basic variations on the traditional Amish Shoofly Pie recipe.”Traditional” Shoo-fly pies are made with either a “wet bottom” (soft filling and crumb topping) or “dry bottom” (crumb topping is mixed into the filling), which is commonly served for breakfast.”

My version of the classic recipe is a wet-bottomed Shoofly Pie that is resolutely traditional, but spiced as only TFD can do – I hope you enjoy it, Citizens! This would be a most satisfactory dessert following an Amish meal including their famed mashed potatoes!