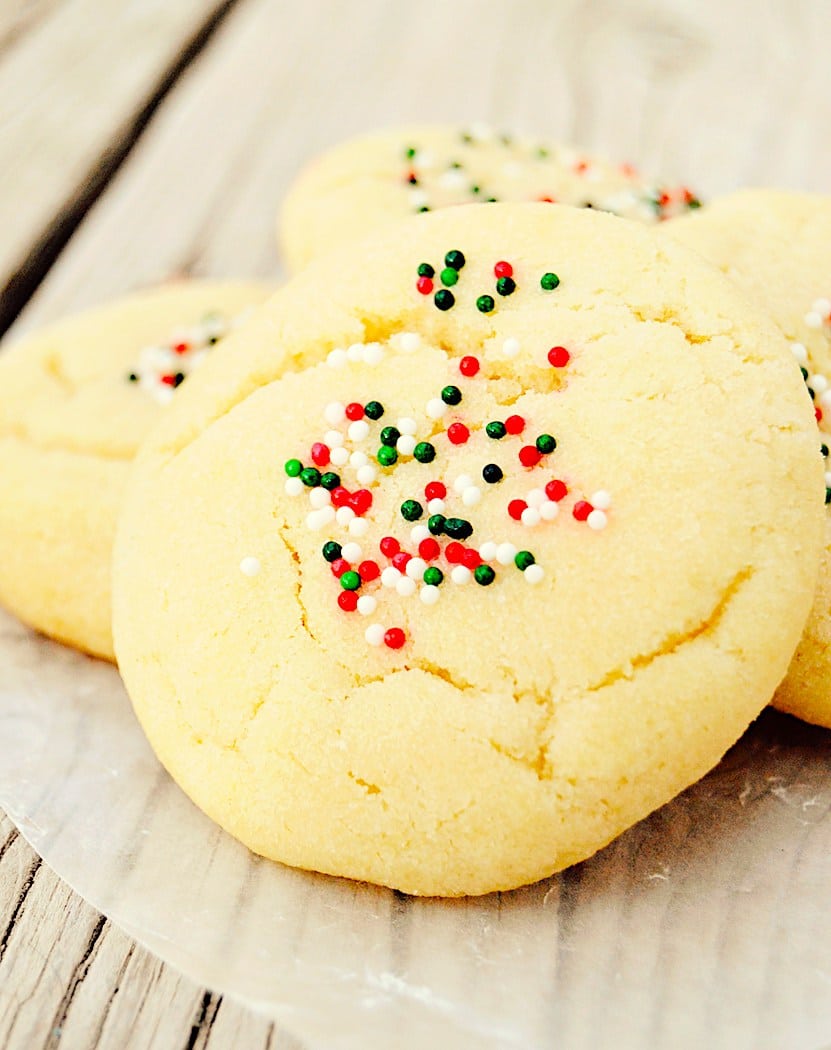 Citizens! We are now in the nadir of the year, the final month of the calendar and traversing the cusp of the holidays (whether Christmas or Hanukkah, as you see fit). Regardless of your faith, lack of it, or simple appreciation for the spirit of the season, this delicious sugar cookie straight from Amish country fits the bill on every level!

Sugar cookies have a lengthy historical background. The origins of cookies date back to the 7th century in Persia, along with the cultivation of sugar.

The sugar cookie as we know it today was created by Protestant settlers in the Nazareth colony of Pennsylvania in the 1700’s. They baked their cookies in the shape of a keystone, the state’s symbol. The first sugar cookies weren’t called by this name.

When word started spreading throughout Europe in the 17th century about these tasty desserts, and later when they were introduced to the Americas, some entertaining terms were employed to describe these small cookie treats. After all, this child-sized indulgence deserves a few whimsical appellations like jumbles, jumbals, crybabies, plunkets and gemmels.

Early cookie recipes that probably morphed into the modern sugar cookie were called gimblettes in France and cimbellines in Italy, too.

About 171 million tons (154 million metric tons) of raw sugar will be made from sugarcane and sugar beets worldwide in 2012.

The Amish were almost assuredly the original settlers in Pennsylvania who brought this cookie tradition with them, and if not then, shortly thereafter.

The Amish make their homes in rural areas in twenty-two U.S. states and Ontario, Canada. The states with the largest Amish populations are Ohio and Pennsylvania.

The Amish have their roots in a Swiss religious sect that was part of the Protestant Reformation in the 1500s. It was called the Anabaptist movement, and its members lived simply, rejecting material wealth. At the end of the 1600s, a small group led by Joseph Ammann broke away from the Anabaptists. They migrated to France and later were called the Amish in honor of their founder.

In the early part of the 1700s, Amish families began arriving in North America. They founded large settlements in Pennsylvania. Gradually Amish settlements spread to Ohio, Indiana, and other states. When they came to the New World (North America), the Amish brought with them the cooking traditions of their homelands in Switzerland and the Rhine River area of Germany.

This heritage can be seen in the popularity of such traditional German foods as sauerkraut, and even in the Amish name for the evening meal, “Nachtesse” (“night eating”). However, Amish cooking was also influenced by life in America. Many Amish settled in areas where wheat, rye, corn, and barley flourished.

Home-baked breads, desserts, and other grain-based foods came to play an important role in the Amish diet. Products of the rural areas where they settled, including eggs and other dairy products, poultry, fresh vegetables, and apples, also became Amish staples.

The Amish have continued to live simply, without modern conveniences such as cars and electricity. They also continue to prepare the simple, hearty dishes they learned from their ancestors.

The Amish generally eat foods produced in their own gardens or on their farms. As a rule, they do not eat processed, store-bought foods, such as corn flakes or potato chips. Homegrown fruits and vegetables, eaten fresh, canned, or frozen, play a very important part in the Amish diet. Vegetables often found in Amish meals include peas, corn, zucchini, beets, beans, rhubarb, and many others.

Cabbage and potatoes are especially important. Sauerkraut—a type of pickled cabbage—appears at many Amish meals in everything from soups to cakes. Grain products like bread, cornmeal, and oatmeal are also staples of the diet. Scrapple, a popular breakfast food, is made with fried cornmeal mush prepared with sausage and liverwurst.

Main meals are usually built around hearty meat dishes, such as pork chops, ham, roast beef, or meatloaf. Dairy products, especially eggs and cheese, are also important dietary staples. The Amish are known throughout the country for the quality of the cheese they produce and market.

Most Amish families keep at least a few chickens so they can eat freshly laid eggs all year round. In the wintertime, hearty soups are eaten regularly. Amish women bake a great deal, preparing breads, cookies, pies, and cakes. The best-known Amish desserts include shoofly pie, sugar cookies, and schnitz pie, which is made with dried apples.

My version of these sugar cookies are melt-in-the-mouth decadence – an ironic description indeed given the Amish heritage of the recipe! My version adds a few luxury elements such as vanilla paste as well as extract for a strong vanilla hit to the palate plus pure almond extract to the classic Amish recipe.

Duck eggs (if you can find them add to the richness, but chicken eggs work just fine. Festively-colored Holiday sprinkles can be bought here. I also call for cultured butter to add to the tenderness of the final cookie. You can buy cream of tartar here.

Citizens, these cookies are easy-to-make, delicious and worthy of gracing your favorite holiday table this season!

With Seasons Greetings to all of TFD Nation – the Generalissimo