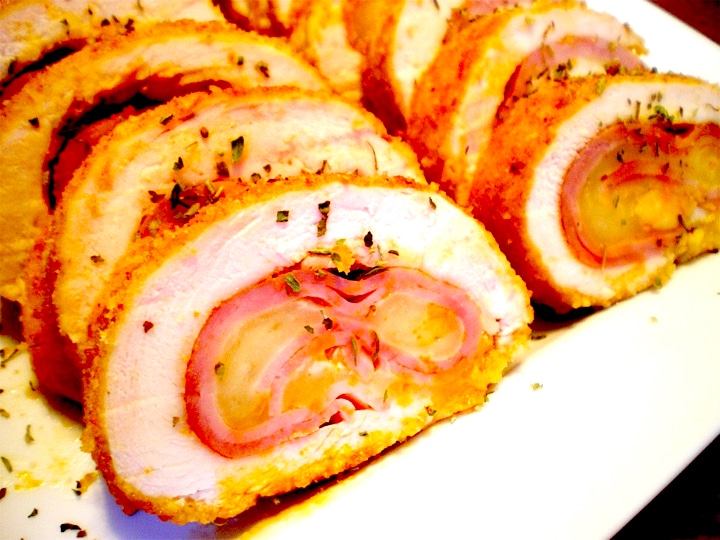 Cordon Bleu – the name conjures all kinds of amazing meals and recipes! Yet even a dish named after the famous cooking school can be updated!

The French term cordon bleu is translated as “blue ribbon”. According to Larousse Gastronomique cordon bleu “was originally a wide blue ribbon worn by members of the highest order of knighthood, L’Ordre des chevaliers du Saint-Esprit, instituted by Henri III of France in 1578.

By extension, the term has since been applied to food prepared to a very high standard and by outstanding cooks. The analogy no doubt arose from the similarity between the sash worn by the knights and the ribbons (generally blue) of a cook’s apron.”

The origins of cordon bleu as a schnitzel filled with cheese are in Brig, Switzerland, probably about the 1940s, first mentioned in a cookbook from 1949. The earliest reference to “chicken cordon bleu” in The New York Times is dated to 1967, while similar veal recipes are found from at least 1955.

There is a nice story told about the actual origin of the recipe – a large group of people had a reservation at a Restaurant in Brig (Switzerland). By coincidence a second, similar sized group showed up at the restaurant claiming to have made a reservation too.

As this happened in the early 19th century the cook was not able to find an adequate amount of meat for both groups in such short time.

She had then the brilliant idea to take the available meat, cut it into schnitzels, slicing these into a butterfly shape and filling them with ham and cheese before breading and frying, so that the amount of meat she had available was enough for both groups.

The owner of the restaurant was so happy about the idea that he offered her ‘the cordon bleu’ (the blue ribbon) a french metaphor for an excellent cook.

The modest lady answered that she does not need a blue ribbon, but that ‘cordon bleu’ would be a nice name for her creation. As the Italian say, ‘se non e vero, e ben trovato’ (even if it is not true, it is well conceived).

The Herbfarm restaurant is one of the finest eating establishments in the Americas, yet it remains sadly under-recognized due to the shy and retiring nature of its former head chef, Jerry Traunfeld.

As a young man, Chef Trauenfeld won the National Chicken Council’s cooking challenge to update the classic Cordon Bleu recipe. His use of fresh herbs as the breading won him a free trip to Paris and a nice check – and you can make this award-winning recipe in all of 15 minutes. 🙂

Proof that even authenticity can stand for a little additional shine when the change is done without altering the fundamentals of the recipe itself.

Also worth noting that this recipe and others that will be posted in the future like it prove the point that authentic cooking that is also easy is not an oxymoron! 🙂 Do try this fantastic Cordon Bleu recipe at your earliest convenience, Citizens!