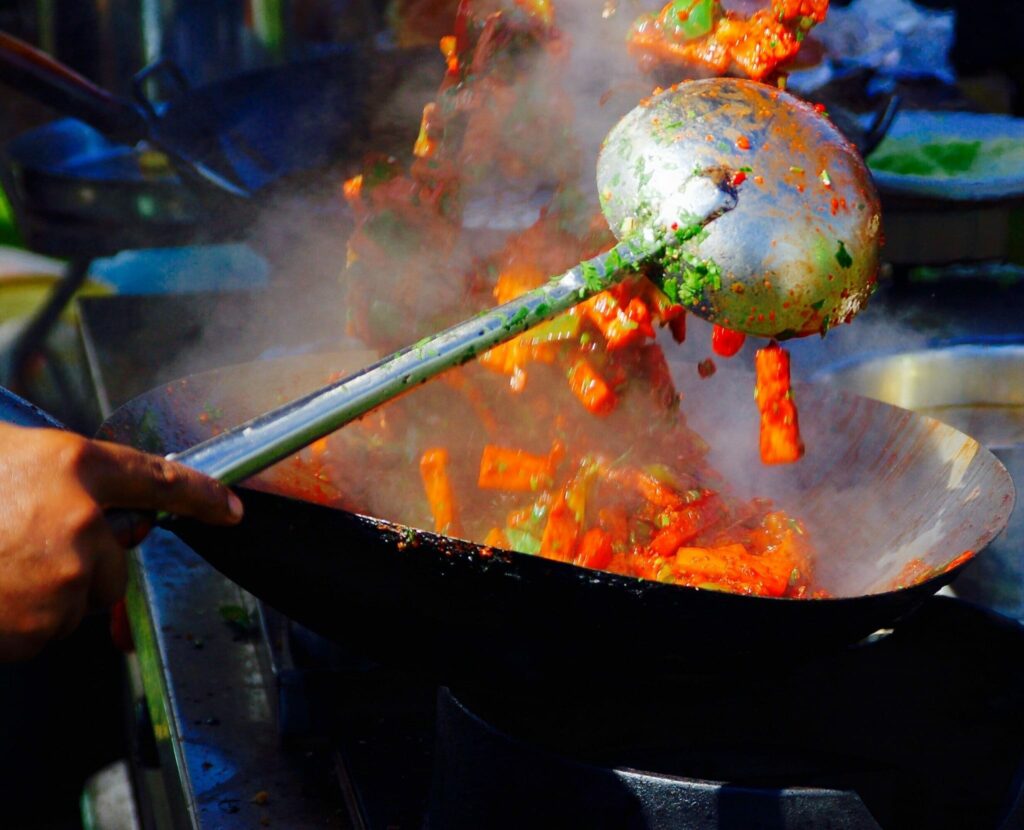 I have been a scholar and aficionado of Chinese cuisine for many years and I always strive to educate people on the subtleties of its culinary arts.

Don’t believe me? Then allow me to share the
40 styles of cooking in Chinese cuisine, as defined by the incomparable Ken Lo in the Encycolpedia of Chinese Cooking.

Consider some of these techniques in your own cooking, Citizens!

1- 煮 Zhu – Indicates cooking in water by boiling, in a well-controlled, well-timed process. Not too long so as to lose juices, nor too short to be undercooked.

2- 湯爆 Tang Bao – Steeping or quick boiling. Thin slices are cooked in the liquid, or the hot liquid is poured over the thin slices. Food is then eated by dipping in dips or mixes.

3- 涮 Shuan – Steeping or quick boiling when carried out in a charcoal, or spirit-heated hot pot or fondue pot.

4- 浸 Jin – Boiling (water, stock, or oil) for a very short time, then allowed to sit in the liquid — off the source of heat

5- 川 Chuan – Allied to ‘Jin’. But a second or third re-boil is used, as for a large cut of meat. Similar to parboiling, but more refined in that it has precise timing and can be an independent form of cooking.

6- 煲 Bao – Deep boiling (equivalent of deep-frying)in water 3 to 4 times the amount of food used. The heat is low and long term.

7- 燜 Men – Similar to stewing. A first fry in oil with seasonings. Stock or water is added, brought to a boil, lowered, and a long period of slow simmering follows.

8- 燒 Shao – Similar to ‘men’ in that oil frying is followed by simmering in stock or water. But a reduction is achieved when other ingredients are added leaving a small amount of gravy. ‘Men’ has more gravy.

10- 滷 Lu – Cooking meat, poultry, eggs and sometimes fish in a strong, aromatic, soy-herbal stock. This stock is an ‘original stock’ which becomes a ‘master stock’ when used again and again.

1- 蒸 Zheng – A form of steaming, in this case – ‘open steaming’. A bowl, plate or basin is placed on a rack in a steamer, with the boiling water some inches below. Or steaming in multi-layered baskets with enclosed sides.

12- 燉 or 炖 Dun – Closed steaming. This is done in a container that has been sealed by foil or a lid. Food first has a short boil followed by a rinse to clean impurities. All seasoning is done before the actual steaming begins.

13- 烹 Peng – Frying food on either side until brown, then water or stock, and supplementary ingredients are added. Cooking continues, on low heat, until the liquid has been reduced to dryness.

14- 燴 Hui – “Hot assemble in thickened soup”. Strips of different foods — cooked, semi-cooked or fresh are fried together with vegetables and seasoning. A soup is added, plus more seasoning, and cooking continues with a thickener added at the end.

15- 拌 Ban – “Hot toss and scramble”. A range of strips of food, (cooked, semi-cooked and fresh) are quickly fried into a ‘hot salad’. It differs from ‘hui’ in that no soup is added. Prior flavoring of the cooked or uncooked foods provides a distinctive quality.

16- 炸 Zha – Deep frying. It is often one of two or three stages of cooking, as in marinated and steamed food having a final deep fry, or cooked wontons being deep-fried. It can be divided into 3 categories: ‘plain fried’ where food is cooked or deep/fried on its own; ‘soft fried’ when sauces are added after excess oil is drained away; ‘dry fried’ when food is dipped into flour, cornstarch or a batter before being fried.

17- 汆 Cuan – One continuous deep frying process. Oil is ‘just hot’ — not too fierce, and the sizzling noise after the food is introduced is just barely audible, so that the food can be cooked for 10 to 15 minutes without burning.

18- 炒 Chao – Stir/frying in a small amount of oil. Ingredients, cut into strips or pieces, are kept in more or less continuous movement — so that the surfaces come into contact with the pan, oil and seasonings.

19- 爆 Bao – Rapid cooking over high heat in oil or stock. Differs from ‘chao’ in that it is the final step in a multi-stage cooking process. The food has been seasoned and flavored, or cooked in a previous stage, then finished in an ‘explosive’ manner in a quick frying process. If stock or water is used, thin slices of meat or vegetables are dipped into a rolling boil.

20- 煎 Jian – Cooking in a small amount of oil — longer than ‘chao’ and much longer than ‘bao’. Larger chunks or pieces are used than ‘chao’ or ‘bao’, hence more time is needed to cook through. ‘Jian’ can be used as one phase in a multi-cooking process. Any gravy or sauce is prepared separately and poured over the dish afterwards.

21- 淋 Lin – “Splash frying”. Food is not actually immersed in the frying oil, but is suspended above the pan, and oil is ladled steadily over the food until it is cooked and browned. It is a controlled method of frying, and seasonings can be added before or during the cooking. As this ‘craftwork’ is done under the eyes of the chef — it is a prized product.

22- 溜 Liu – A form of wet frying, often in a flat pan where direct contact can be had without continual movement. A sauce is added after both sides have been fried, or during the final phase of cooking. Often used for fish. In Canton, the term ‘Hua’ is used.

23- 貼 Tie – A non-scramble form of oil frying in a small amount of oil. The food is not turned. Stock or water may be used, while the frying is going on, so as to keep the top soft. (pot stickers). The term ‘tie’ is sometimes applied to cooking a large piece of food, in which both sides are cooked completely and when cooking is completed, the food is removed from the pan and sliced before serving.

24-火& 邊 Bian – A type of frying (mostly vegetables) in which 10 to 15 % of oil is used in relation to the weight of the vegetable being cooked. The oil is seasoned, the vegetable then fried. Stock or water is then added to steam/fry or to prevent burning.

25- 熬 Ao – Similar to ‘bian’. Fried food or vegetable is partly cooked. Water or stock is added and the dish is finished with a high-boil and high-fry ending with the food being part fried and part steamed. Often used with crab or lobster.

26- 炆 Wen – Similar to Western braising. Food is quick fried, seasoned, then when water or stock is added, the heat is lowered and cooking continues. A thickener is then added to the pan to finish the dish

27- 火 & 屈 Jue – Similar to ‘wen’. The fried, seasoned, braised food is removed to a serving dish. The sauce is then finished and poured over the food.

28 – 焗 Ju – Another variation on braising. The fried, seasoned food has its added liquid reduced to desired thickness by low heat slow cooking, or controlled high heat cooking. ‘Ju’ also can mean pot-roasting or casserole cooking with a minimal amount of liquid.

29- 火& 倉 Cang – Fried, braised dishes are placed on a serving plate. A separate sauce is heated, poured over the food and allowed to cool. The dish is served cold. ‘Cang’ also describes ‘cold mixing’ or ‘cold tossing’ (as in salad making). ‘Cold mixing’, in China, generally applies not to vegetables, but to noodles.

30- 塌 Ta – Deep-frying in batter, draining, then cooking and braising with various liquids. Also used to describe the same process with an initial steaming before the deep-frying and braising.

31- 烤 Kao – Same process as Western roasting. But without modern ovens, in China, the process involves piling smoldering wood and charcoal on the sides of the stove, with the food being cooked hanging in the middle. The cooking is through air-heating or direct-level radiation. It differs from ‘shao’, where the heat is applied from below.

32- 烘 Hong – Open barbeque-roasting. It involves frequent turning of raw food on a spit over an open fire. ‘Shao’ sometimes means the same thing, but ‘hong’ is the more specific term. It means heating mainly by radiation.

33- 煨 Wei – Cooking by burying food in hot solids such as charcoal, heated stones, sand, salt or lime. Foods generally have a thick crust or skin (ex. sweet potato), or foods wrapped in a cover – lotus leaves, mudpack, or a sheet of suet.

34- 燻 Xun – Smoking a food that has usually been cooked and previously seasoned. The food is suspended over the smoke/fire on a wire rack inside a pan or tin that has a cover. Smoldering coal or charcoal is covered with some sawdust, sugar or dried tea leaves, which creates a heavy smoke. The lid is closed and the food smokes for a measured time. Called ‘hsung’ in Cantonese.

35- 扣 Kou – A double process of frying first, then steaming. The main ingredient is fried, sliced, and packed in layers, with flavorings, in a bowl. The bowl contents are steamed and then inverted on a serving plate.

36 – 扒 Ba – The opposite of ‘kou’, in that the food is steamed first, then fried. In the final frying additional ingredients, seasonings and materials are often added.

37 – 醉 Zui – Marinating fresh or cooked food in wine or liqueur before serving. (Drunken Chicken)
The food is usually lightly cooked (‘jian’) then marinated in wine or liquor and seasonings for a period of time. Meat, (usually poultry) fish and seafood can be prepared in this manner.

38 – 醬 jiang and 糟 zao – Similar to ‘zui’, but in ‘jiao’, the main ingredients are soy sauce and soy jam. In ‘zao’ it is a paste made from wine-sediment which is called ‘wine sediment paste’. (The dregs or lees from the bottom of a wine jar.) The food is lightly cooked, then placed in an earthen jar and marinated — often several days or weeks.

39 – 醃 Yan – A general term for salting and marinating, but more specifically, the process of salting – usually with coarse salt. Heating in one form or another usually precedes or follows the salting. After rubbing with salt and saltpeter, the food is placed in an earthen jar and turned over every three days. After 9 days a weight squeezes out any remaining liquid. Such treated, meat keeps a good length of time.

40 – 風 Feng – A process of drying in the wind, instead of by compressed marinating in a jar. On their own these preserved meats and fish are edible and appealing, they are often used in conjuction with fresh food adding a distinctive taste contribution.