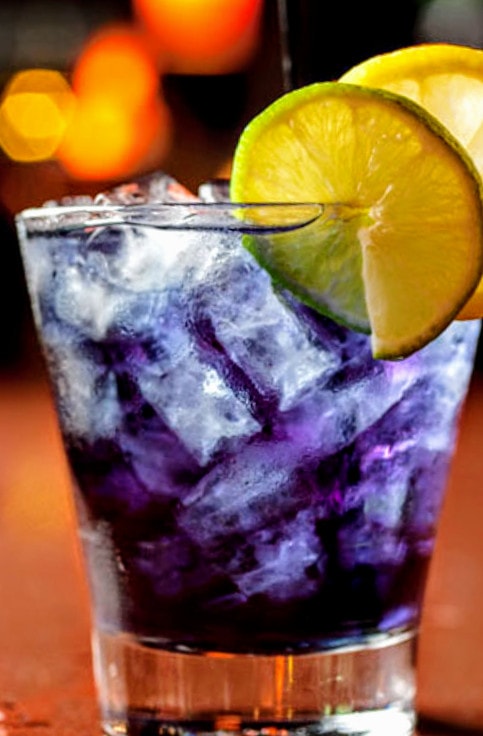 Citizens! Your beloved leader, the occasionally bibulous TFD, enjoys an occasional cocktail before a meal – especially unique ones!

This one certainly fits the bill and is named after the 1958 cult classic song by Sheb Wooley, which you may enjoy at the video here.

As noted on Wikipedia:

“The Purple People Eater” is a novelty song written and performed by Sheb Wooley, which reached no. 1 in the Billboard pop charts in 1958 from June 9 to July 14, reached no. 12 overall in the UK singles chart and topped the Australian charts.

“The Purple People Eater” tells how a strange creature (described as a “one-eyed, one-horned, flying, purple people eater”) descends to Earth because it wants to be in a rock ‘n’ roll band. The premise of the song came from a joke told by the child of a friend of Wooley’s; Wooley finished composing it within an hour.

The creature is not necessarily purple, but rather it eats purple people:

I said Mr Purple People Eater, what’s your line?
He said eating purple people, and it sure is fine
But that’s not the reason that I came to land
I wanna get a job in a rock ‘n roll band

The ambiguity of the song was present when it was originally played on the radio. In responses to requests from radio disc jockeys, listeners drew pictures that show a “people eater” colored purple.

The voice of the purple people eater is a sped-up recording, giving it a voice similar to, but not quite as high-pitched or as fast, as Mike Sammes’s 1957 “Pinky and Perky”, or Ross Bagdasarian’s “Witch Doctor”, another hit from earlier in 1958; and “The Chipmunk Song” which was released late in 1958. (The Chipmunks themselves eventually covered “Purple People Eater” for their album The A-Files: Alien Songs (1998).) The sound of a toy saxophone was produced in a similar fashion as the saxophone was originally recorded at a reduced speed. (The Chipmunks’ cover version has a longer sax solo, and it was recorded and played at its normal speed.)

The song invokes phrases from several other hit songs from that era: “Short Shorts”, by The Royal Teens, and “Tequila”, by The Champs, both from earlier in 1958; and “Tutti Frutti” from 1955.

The cocktail is quite delicious, and the name will certainly evoke a range of commentaries from your lucky guests!