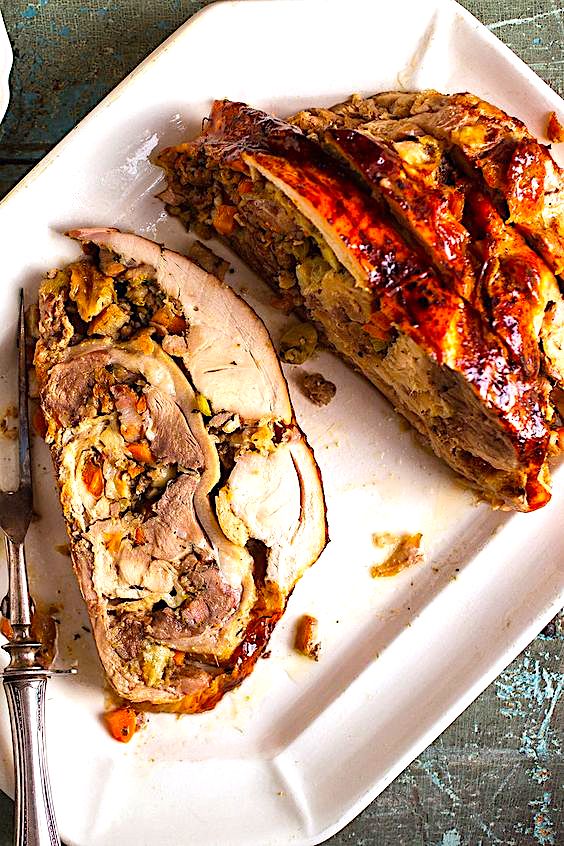 My Citizens, I have long awaited the opportunity to present you with this, perhaps the most complex recipes in my repertoire! Behold the almighty, legendary Turducken – a recipe that will test only the boldest and most talented Citizens of TFD Nation (and all their friends!). This is, in my humble opinion, the canonical version of the recipe, as prepared by the dish’s first evangelist, the unmatched Chef Paul Prudhomme!

The word turducken is a portmanteau of turkey, duck, and chicken. The dish is a form of engastration, which is a recipe method in which one animal is stuffed inside the gastric passage of another.

The thoracic cavity of the chicken/game hen and the rest of the gaps are stuffed, sometimes with a highly seasoned breadcrumb mixture or sausage meat, although some versions have a different stuffing for each bird. The result is a fairly solid layered poultry dish, suitable for cooking by braising, roasting, grilling, or barbecuing.

Credit for the creation of the turducken is uncertain, though it is generally agreed to have been popularized by Cajun chef Paul Prudhomme. The most common claimant is Hebert’s Specialty Meats in Maurice, Louisiana, whose owners Junior and Sammy Hebert say they created it in 1985 “when a local man brought his own birds to their shop and asked the brothers to create the medley”.

A New Orleans surgeon, Dr. Gerald R. LaNasa, was locally known for his use of a scalpel in deboning his three birds of choice, sometimes adding pork or veal roasts in the final hen’s cavity, thus preserving the turducken tradition as a regional holiday favorite of the southern United States. Andouille sausage and Foie Gras were always key ingredients of the LaNasa creations. The results of Dr. LaNasa’s work can be found in the modern day mass-produced turducken or turduckhen (another variation adding or substituting a cornish game hen). His turkey, duck, and chicken ballotine is now widely commercially available under multiple trademark names. Dr. LaNasa’s innovation and success with ballotine, Three Bird Roast and turducken began mid century, expanding in the 1960s and seventies long before many of the popular commercial Cajun/Creole chefs of today took the stage.

In his 1807 Almanach des Gourmands, gastronomist Grimod de La Reynière presents his rôti sans pareil (“roast without equal”)—a bustard stuffed with a turkey, a goose, a pheasant, a chicken, a duck, a guinea fowl, a teal, a woodcock, a partridge, a plover, a lapwing, a quail, a thrush, a lark, an ortolan bunting and a garden warbler—although he states that, since similar roasts were produced by ancient Romans, the rôti sans pareil was not entirely novel. The final bird is very small but large enough to just hold an olive; it also suggests that, unlike modern multi-bird roasts, there was no stuffing or other packing placed in between the birds.

Another version of the dish is credited to French diplomat and gourmand Charles Maurice de Talleyrand-Périgord. The 1891 newspaper article French Legends Of The Table offers Quail a la Talleyrand:

The following for instance, is Talleyrand’s fanciful and somewhat roundabout way of roasting a quail. On a day of “inspiration gourmande” at his hotel in the Rue Saint-Florentin, he composed the following recipe: Take a plump quail, seasoned with truffles, and made tender by having been put into champagne. You put it carefully inside a young Bresse chicken; then sew up the opening, and put dabs of butter all over the chicken. Again, you put the chicken inside a fine Berri turkey, and roast the turkey very carefully before a bright fire. What will be the result? All the juice of the turkey is absorbed by the fowl, and all the juice of the fowl in its turn by the quail. After two hours roasting the fowl, which in reality it composed of three fowls, is ready, and you place the steaming trinity upon a dish of fine porcelain or chiseled silver. Then you pull the chicken out of the turkey, and the quail out of the chicken. The quail? Is it correct to talk of the quail, when this delicious, perfumed dish is indeed too good for any name? You take the quail as you would some sacred relic, and serve it hot, steaming, with its aroma of truffles, after having roasted it to a golden yellow by basting it diligently with the best Gournay butter.

The book Passion India: The Story of the Spanish Princess of Kapurthula (p. 295) features a section that recounts a similar dish in India in the late 1800s: “Invited by Maharajah Ganga Singh to the most extraordinary of dinners, in the palace at Bikaner, when Anita asks her host for the recipe of such a succulent dish, he answers her seriously, “Prepare a whole camel, skinned and cleaned, put a goat inside it, and inside the goat a turkey and inside the turkey a chicken. Stuff the chicken with a grouse and inside that put a quail and finally inside that a sparrow. Then season it all well, place the camel in a hole in the ground and roast it.”

Citizens, this is a challenging recipe indeed – only attempt it with your posse backing you up! 🙂