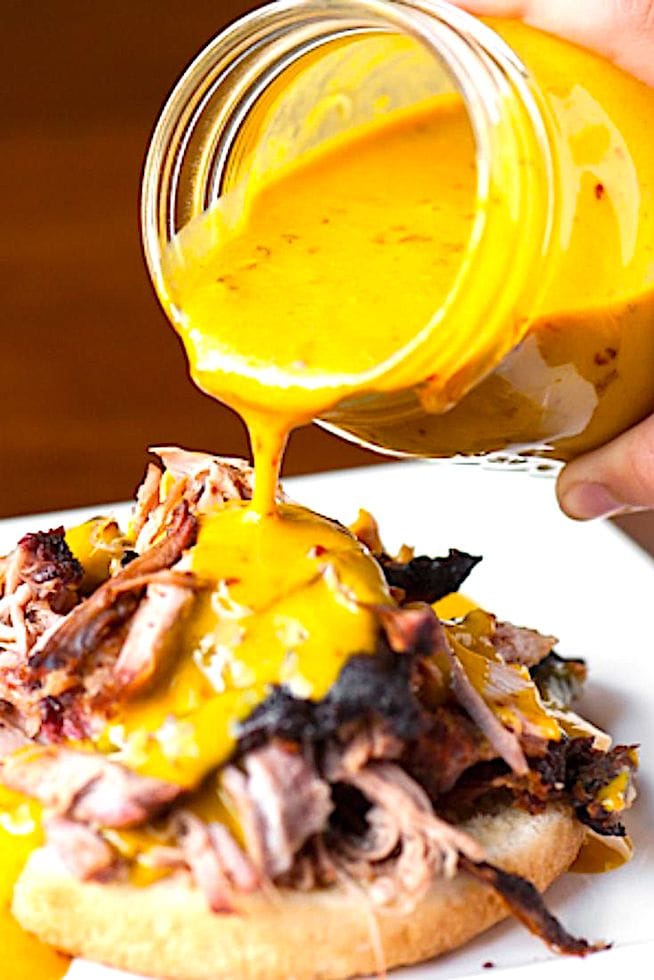 Citizens, I’ve posted many recipes from that gastronomic deep south hotspot – South Carolina! – yet I have neglected to share perhaps their most delicious addition to culinaria – their BBQ!

Barbecue is common currently and historically in the U.S. State of South Carolina. Throughout South Carolina, barbecue consists primarily of pulled pork. However, there are different variations within the state, mainly in the type of sauce that is used.

There are four main sauces that are used in the state, mustard-based, tomato-based, vinegar-based and heavy tomato. While the styles differ regionally, most barbecue restaurants will have all four styles of sauce. On the other hand, a private cookout will still likely only have the sauce of its particular region.

Mustard based sauce is common in the Midlands of South Carolina. It has a mustard base with vinegar, sugar and sometimes pepper or other ingredients. The sauce can be traced back to 18th century German settlers in the region.

Light tomato-based sauce – also known as “Lexington Style”, it is made with tomatoes or ketchup, vinegar and pepper. It is common in the Pee Dee region as well as along the North Carolina border in the Northern parts of the state.

As further noted on scbarbecue.com:

North and South Carolina share three of the four types of barbeque sauce that Americans normally use. But only South Carolina is the home of all four.

The “original” barbeque sauce, dating back hundreds (yes, hundreds) of years is Vinegar and Pepper, the first and simplest of the four. It is found on the coastal plains of both North and South Carolina and to a slight degree in Virginia and Georgia.

Starting in the 1730s and continuing into the 1750s, the British colony of South Carolina encouraged, recruited, and even paid the ocean passage for thousands of German families so they could take up residence in South Carolina. They were a hard working, sturdy and resourceful people who were given to an intensive family-farm type of agriculture, as opposed to the plantation system favored by the English settlers.

Those German families were given land grants up the Santee, Congaree, Broad and Saluda Rivers as they came in successive waves over a twenty plus year migration. Those rivers all flow into each other and fall from the South Carolina upcountry to the low country. The simplified map on the home page of the Carolina Q Cup (carolinaQcup.com) shows the location of mustard sauce in South Carolina.

The first German settlements were in present day Dorchester County, and then successive waves of settlers moved on up the rivers to the counties of Orangeburg, Lexington, Newberry and the northwestern part of Richland County. (The middle and southern parts of Richland were settled by English settlers.) These German settlers brought with them, in addition to their European farming style and the Lutheran Church, the common use of mustard.

South Carolina mustard sauce can be clearly traced to those German settlers and is still in abundant evidence today, even after 250 years, in the names of the families who sell mustard based sauces and mustard based barbecue to the public.

The Bessinger family is the most prominent in the mustard based barbeque business, but other German names are legion in the South Carolina barbeque business – Shealy, Hite, Sweatman, Sikes, Price, Lever, Meyer, Kiser, and Zeigler are other examples and there are many more. (There is even a Dooley’s barbeque in Lexington County, which everyone generally thinks of as an Irish name, but which comes from the German Dula family [pronounced Doole], as in the infamous Thomas Dula who became “Tom Dooley” in the Kingston Trio’s 1960s song, “Hang down your head Tom Dooley.”)

The Scottish families who settled primarily in Williamsburg County in present day South Carolina low country are the most famous South Carolina preparers of Vinegar and Pepper barbeque. The most prominent present day Scottish barbeque family is probably the Brown family, but there is also McKenzie, Scott, McCabe and many others who have remained, like the German families, true to their heritage. This simple Vinegar and Pepper sauce is the first, and therefore the oldest, of the South Carolina basting sauces.

For me, the unique mustard sauce is what defines SC ‘Q, and that is the version I will share with you today, ! 🙂

The sauce is my own with a few trademark TFD idiosyncrasies, but the methodology on how to properly cook the meat is cribbed from Cook’s Country, my favorite Americana recipe site! They totally nailed it, and I can only suggest one or two tiny deviations in their instructions that are better suited to my palate.

I have every confidence you will LOVE this rarely-seen style of BBQ, Citizens! Be sure and stick to soft hamburger buns for the sandwich – TFD enjoys Oroweat Country Potato Buns. There can be zero doubt in your respective minds how delicious and truly special this recipe is to the BBQ enthusiast, let alone anyone ho simply appreciates great ‘q, no matter their age or location!