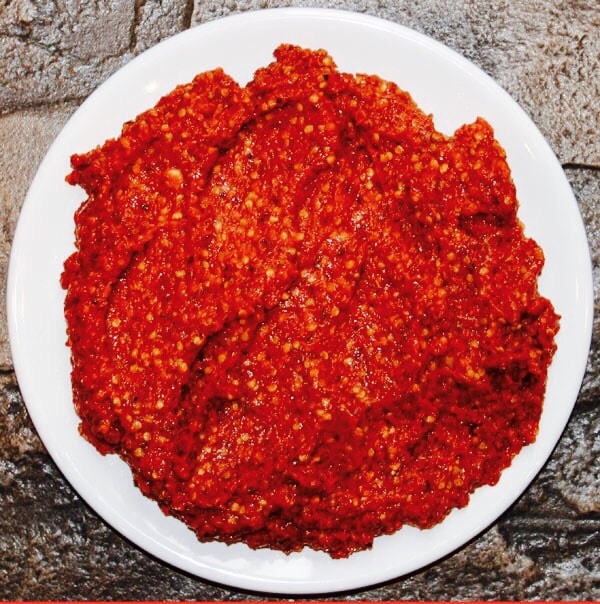 Harissa (Arabic: هريسة‎) is a North African hot chili pepper paste whose main ingredients are roasted red peppers, hot peppers and other spices and herbs such as garlic, coriander seed and especially caraway as well as some olive oil for preservation.

It is most closely associated with Tunisia, Libya and Algeria, but recipes vary according to the household and region. Variations can include the addition of cumin, red peppers, garlic, coriander, and lemon juice. In Saharan regions, Harissa can have a smoky flavor.

Traditionally Harissa is  most closely associated with The Mahgreb region, specifically Tunisia, the northern edge of Africa touching the Mediterranean Sea, made up of the modern countries Tunisia, Morocco, Algeria and Libya.

The name Harissa comes from the Arabic verb harasa, meaning ‘to pound’, or ‘break into pieces’. It’s thought to originate from Tunisia, where shoppers in spice souks watch it pounded out while-u-wait. The simplest versions are just the bare bones: chillies, salt and olive oil.

Most historians think chillies first landed in Africa as a result of the Spanish occupation of Tunisia in 1535-74, when chilli peppers first started turning up at the souks (it’s fun to imagine what Tunisian chefs would have made of these fiery new ingredients…what do you think?).

Over the next 500 years, chilli would go on to fire the taste buds and imaginations of cooks all over the globe, in just about every culture. In North Africa, they popped up as Harissa.

While my Harissa is predominately Tunisian in style, it does include flavor components from other North African regions as well. I’ve included 5 (!) different dried hot peppers plus both fresh and roasted to really layer the flavors into a seamless symphony of tastes! You can of course reduce the number of kinds of peppers or change them to your taste! You can buy most, if not all, of the dried peppers here.

You can also dilute the paste into a Harissa table sauce for use on pretty much anything except dessert to add a level of pungent heat and amped flavor to your meal.

Enjoy, my Citizens – I believe you will find this to be an exceptional recipe indeed! 🙂 if you do desire, also try the rare Tunisian green Harissa or even the ultra-rare Harissa made with rose petals! 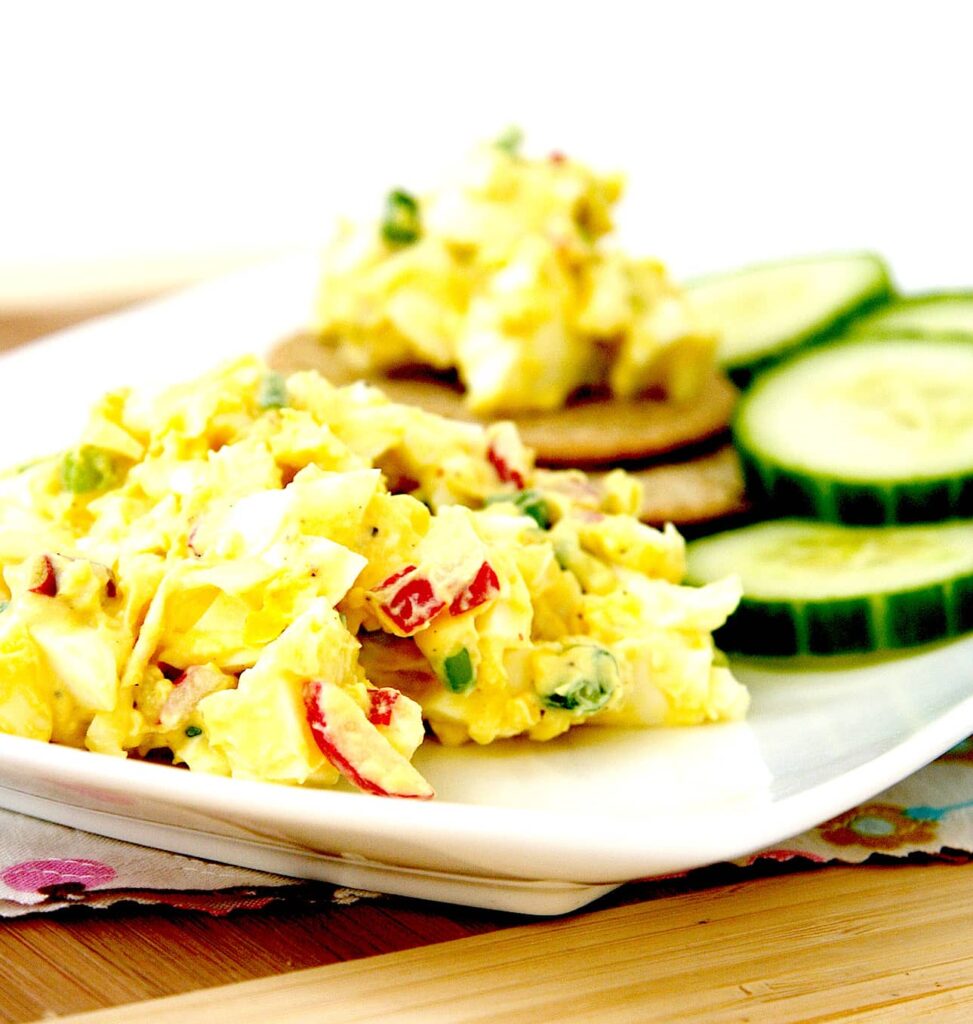 After posting several rather involved recipes, it occurred to me that perhaps I should throttle back on the difficulty factor and showcase a simple, delicious recipe that is beloved worldwide.

Thankfully, a “simple” recipe for me is still a complex blending of flavors, and it is in that bold spirit that I share my personal recipe for deviled egg salad!

Deviled eggs (American English) or devilled eggs (British English), also known as stuffed eggs, Russian eggs, or dressed eggs, are hard-boiled chicken eggs that have been shelled, cut in half, and filled with a paste made from the egg yolks mixed with other ingredients such as mayonnaise and mustard. They are generally served cold as a side dish, appetizer or a main course, often for holidays or parties. The dish’s origin can be seen in recipes for boiled, seasoned eggs as far back as ancient Rome, where they were traditionally served as a first course. The dish is popular in Europe and in North America.

The term “deviled”, in reference to food, was in use in the 18th century, with the first known print reference appearing in 1786. In the 19th century, it came to be used most often with spicy or zesty food, including eggs prepared with mustard, pepper or other ingredients stuffed in the yolk cavity.

Delicious on a cracker, a sandwich, or just straight out of the bowl, this is a killer deviled recipe redolent of spices, herbs, and more – I would hope by now you’d expect nothing less from me!

Of course, please use the best eggs you can get your hands on, preferably not from a ‘factory farm’ and as close to the source as possible. If you’ve never had an organic, fresh egg – now is the time to try them, citizens! I personally enjoy both Hellman’s / Best Foods brand mayo (available nationwide) or Duke’s (only in the south, buy it here). Without question, the finest anchovy-stuffed olives in the world are these.

I am confident my recipe will find favor with you – now sally forth and try this toothsome and piquant egg salad for yourself! 🙂 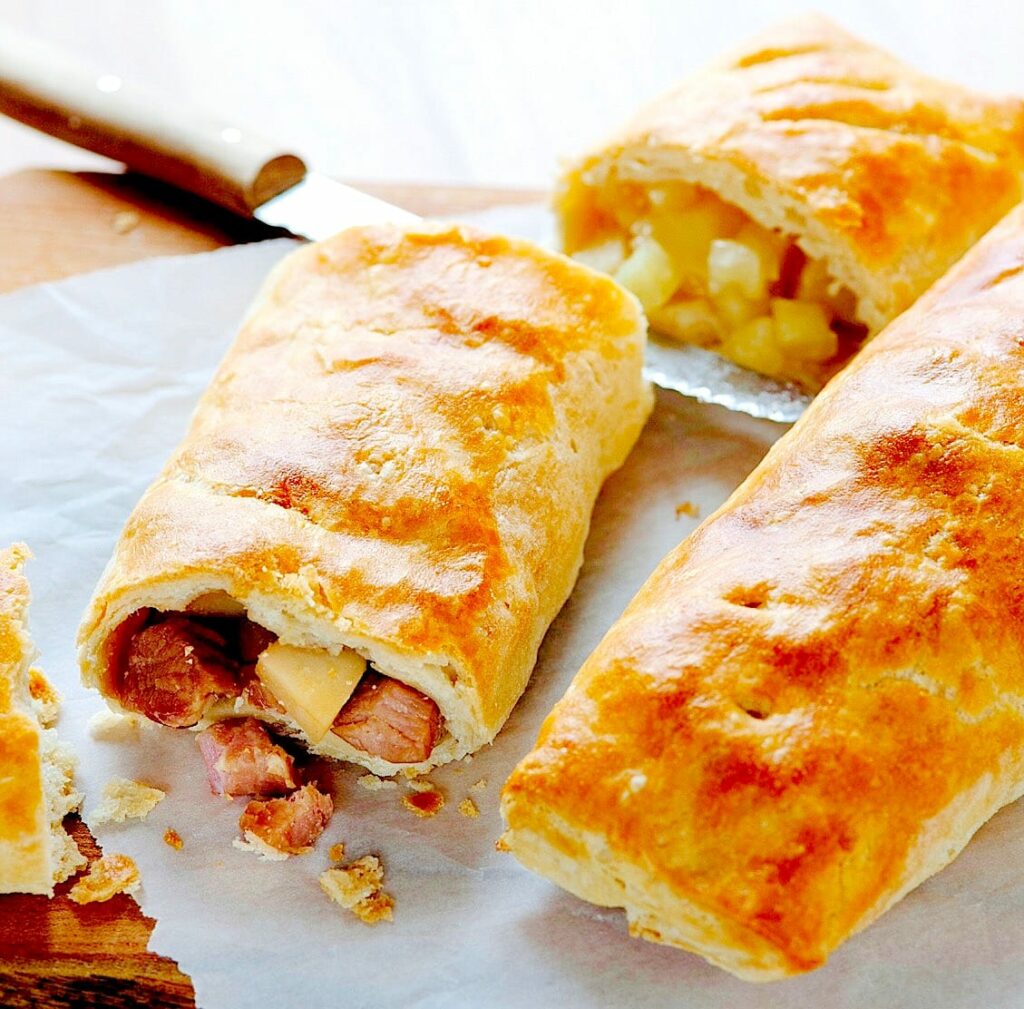 This is the third posting related to my holy trinity of meat-stuffed pastries – the Argentine empanada, the Australian Meat Pie and the Bedfordshire Clanger.

I hear your collective gasps, Citizens – just what the hell *IS* a Bedfordshire Clanger?

Put simply – it’s a very unique and little-known meat pie recipe from England, specifically (not surprisingly) the county of Bedfordshire which is nestled in the very beating heart of the country. For the record, I also dearly love Cornish Pasties, Melton Mowbray pie and a host of others classic English meat pie recipes – these will be featured in future posts. I want to highlight the humble Clanger as the least known, yet just as delicious alternative to these more well-known recipes, particularly since it includes dessert!

The County of Bedfordshire

Bedfordshire is a bucolic and agrarian county (with the town of Luton now a center of the automotive and tech industry), and in centuries past many of the working husbands of the area used to toil in the fields there. Their wives, knowing their husbands would need lots of protein and carbohydrate sustenance, came up with the brilliant idea of a doubled, loaf-shaped pie. One end containing a savory filling that used the famed pork of the area while the other end was filled with stewed apples (made from the famed local apples) as dessert!

This was brilliant, an entire meal for the hard-working man – handheld, portable and delicious. Traditionally there was a secret code to denote which end was meat and which was dessert: two tiny holes on one end of the pastry top means meat, three knife slits on the other shows the sweet.

You can still find this as a local recipe in Bedfordshire, but it deserves to be far better known. Thus, I took it upon myself to come up with a TFD recipe worthy of our citizens and their enjoyment! It includes a few ingredients not found in the original, but I find the judicious addition of roasted onion jam – you can buy it from Amazon (or use herb or some form of pepper jelly of your choice), a dash of hot sauce, a bit of garlic and thyme livens up an already great flavor. I’ve also added some pears to the stewed apple and a touch of orange flavor as well.

PS – as to why the name “Clanger” – in the nearby Northamptonshire dialect, ‘clang’ means to eat voraciously!