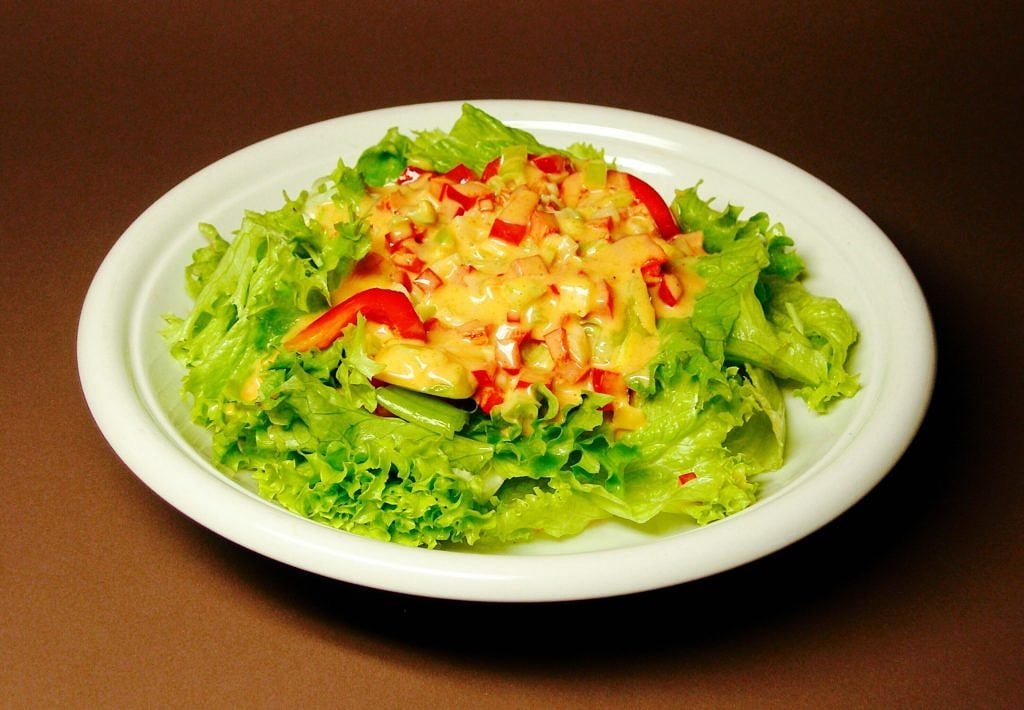 Citizens, it pains me beyond measure to know that Thousand Island dressing – once a rich and noble salad dressing both piquant and delicious – has now degraded to simply mayo and ketchup with a bit of relish thrown in it.

A sad state of affairs that TFD aims to fix once and for all, putting this delicious dressing high up on its rightful pedestal. This dressing was a deli staple back in the day and deserves a resurgence to its noble pedigree!

I have based my version of Thousand Island dressing recipe on the original favorite for over 50 years in Alexandria Bay, NY – in the heart of the Thousand Islands region that gave this dressing its name.

Story goes, in the early 20th century, a fishing guide’s wife, Sophie Lalonde, made the condiment for her husband’s shore dinner.

The actress May Irwin liked it so much she requested the recipe.

She in turn, gave it to another Thousand Islands summer visitor, George Boldt, who was the owner of the Waldorf Astoria Hotel in New York. Boldt then directed his world-famous maitre d’, Oscar of the Waldorf, to put it on the hotel’s menu at once.

Note that it makes 1 quart (32 ounces) of dressing, so either halve it or store the remainder in the fridge for sandwiches or other salads.

I’ve very gently tweaked the recipe to include chili sauce and Tabasco, as I find it brings all the flavors together into a spicy and harmonious whole.

Enjoy, my Citizens: whether on a salad, a Reuben or a turkey breast sandwich on rye. 😀 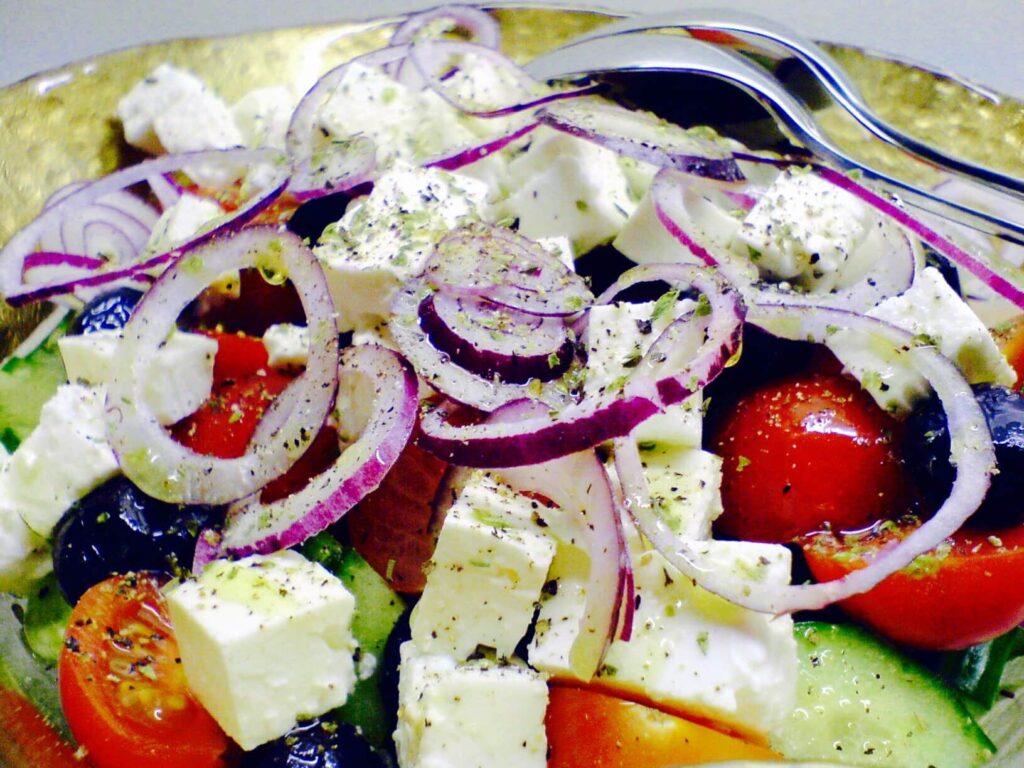 Greek salad is perhaps one of the most beloved salads to be found – and what’s not to like? Lettuce, tomato, cucumber, olives and feta cheese find a beautiful harmony in a lemon-scented dressing perhaps tied together with the saltiness of anchovy fillets.

Truly, a more bountiful bowl of greenery has rarely graced a table!

In Greece, we call it ‘Horiatiki’, which means village or peasant salad – basically a combination of tomatoes, onions, cucumbers, green peppers, olives and feta cheese, dressed in olive oil and sprinkled with oregano.

From its Greek name we assume that it was a rural dish. It is true that the salad’s essential ingredients were often what a farmer would take to the field for his mid-morning snack, only he would keep the ingredients uncut and wrapped in a cloth with a piece of bread.

When the time came, he would bite straight into his chunk of feta, his tomato and even (quite heroically) his onion!

The salad’s exact origin is debatable, but one thing we can be sure of is that the Greek Salad is not part of the country’s long established traditional cuisine.

We know this because, incredibly, the tomato did not become popular in Greece until the end of the 19th, beginning of the 20th century. This is hard to believe, considering how fast it’s made itself a home here in Greece.

My American version of the Greek original includes capers, oregano, sweet and hot chopped peppadew peppers (found at many supermarket deli counters) as well as a spicy kick in the ass from some hot chili oil, because TFD digs the spicy.

Follow my recipe and you too will storm the gates of the culinary Mount Olympus to challenge the very Gods themselves, my Citizens! 🙂 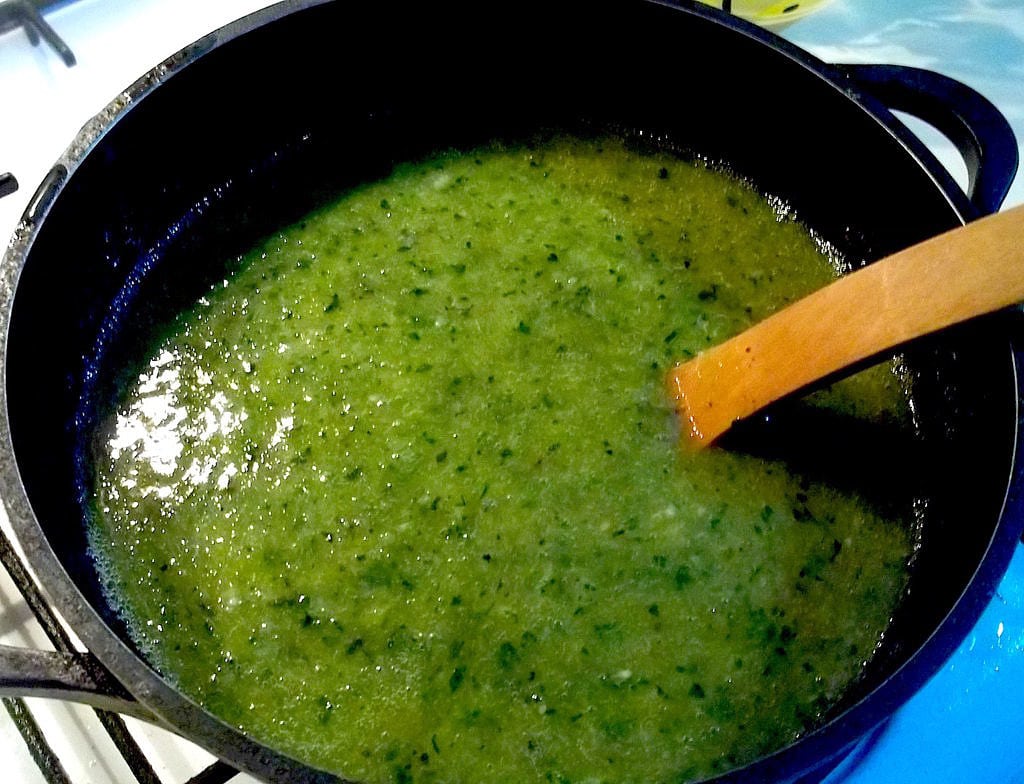 My Citizens! I am proud beyond measure to announce that TFD Nation is now comprised of many proud Georgians who have shared and enthusiastically supported my posting of Georgian recipes – as such, I will do a rare double posting of a regional cuisine to thank these loyal readers!

Today, I share the national condiment of Georgia – called Tkemali, it is made from sour plums, herbs, garlic and spices and is the “ketchup” used to flavor many great Georgian recipes. It is exceedingly delicious and is made by devoted Georgians every year in the Spring when the plums are still green (there are also red and yellow Tkemali made in the Summer from ripe plums – that recipe will be posted another time).

It is possible to buy green Tkemali in Russian delis and grocery stores here in the U.S. – one source is here. Should you be so inclined to try and make it at home, you will be rewarded with a truly delicious condiment that you will use on virtually everything (and extra to share with friends and family).

A “cheat” recipe that I’ve come up with that approximates the flavor profile of Tkemali is 1 part A-1 sauce mixed with an equal part of plum, apricot or quince jam – but here, we are going with the full-fledged authentic version! 🙂

Like most Georgian recipes, this Tkemali recipe uses several unique spices that I have listed sources for as well as suggested substitutions. I’ve listed the proportions in both metric and imperial units. Georgians would use the mint relative Pennyroyal in making this – you certainly can use it, but recent reports put the safety of this herb in question. I prefer to use Lesser Calamint (source provided) in its place – same taste as Pennyroyal, so no compromise. You can buy it from here.

Citizens – I hope you will try this just once and become a true convert to the wonders of Georgian cuisine via Tkemali! 🙂 Please note this make a LOT of sauce, you can easily halve the recipe or more if need be. You can buy the rare Georgian blue fenugreek from here.