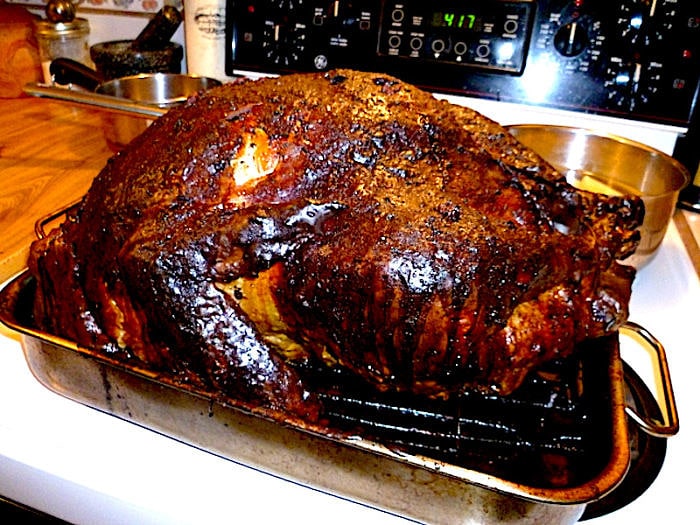 Citizens, yesterday I posted the complete set of recipes for my own beloved Thanksgiving feast. Today, I give you a rare back-to-back daily recipe post: a turkey and stuffing recipe of truly mythic provenance – the legendary “burnt” or “black” Thompson’s Turkey!

To properly describe its succulent wonders, I reprint an article below in its entirety from the Chicago Tribune that summarizes this recipe of gustatory repute and cult status. Yes, it’s a pain to make – yes, it’s TOTALLY worth it, especially that transcendent stuffing! 😀

Twenty-four years ago this month, the Tribune’s food section printed a turkey recipe and changed my life. Not just any turkey recipe, mind you. Such recipes proliferate at this time of year, and they usually involve bland combos of celery and bread crumbs.

This particular recipe was for Thompson’s turkey, which has been called the world’s greatest turkey by everyone who ever ate the result. These fortunate diners remain a minority, though, because Thompson’s turkey is a cult item, limited to the few who know a cook willing to devote the time and labor to a dish with a list of ingredients that reads like the dramatis personae of a Russian novel.

It is, in short, a whole lot of work.

No matter. There is something about Thompson’s turkey that inspires the kind of rhapsodic prose usually reserved for sunsets or sex. Richard Gehman, the author of that Tribune article in 1978, described its meat as “browned in a variety of tones stretching from light tan to mahogany, and edible in a variety of tastes stretching from marvelous to unbelievable.” Robert Benchley, the famed humorist, ate a turkey cooked by his friend, the eponymous Morton Thompson, and reported that “I didn’t eat the whole turkey, but that wasn’t my fault. There were outsiders present who ganged up on me.”

Thompson was a New York newspaperman and columnist who is best remembered today (except by turkey-lovers) as the author of “Not as a Stranger,” a best-selling novel of a half century ago. Thompson, who wrote as gaudily as he cooked, described his bird as:

“Golden and dark brown, succulent, giddy-making with wild aromas, crisp and crunchable and crackling. The meat beneath this crazing panorama of lip-wetting skin will be wet, juice will spurt from it in tiny fountains as high as the handle of the fork plunged into it: the meat will be white, crammed with mocking flavor, delirious with things that rush over your palate and are drowned and gone as fast as you can swallow. You do not have to be a carver to eat this turkey,” Thompson wrote. “Speak harshly to it and it will fall apart.”

Well. There’s some hyperbole here, but not much. Seduced by that 1978 article, I’ve been cooking Thompson’s turkey ever since, except for one Thanksgiving when I was covering the Czechoslovak revolution, which was exciting but not a patch on the first bite of Thompson’s stuffing (of which more, much more, later).

A recipe for the ages:

The original clipping is brittle with age and rigid with two decades of turkey grease and gravy stains. Elder members of the clan have passed on and new diners have been born. But whatever their differences on politics or music, the generations seem united in the belief that there is no turkey but Thompson’s turkey.

Morton Thompson’s creation is unique for two reasons: the stuffing and a thick slathering of paste that turns the whole thing black but preserves the flavors bubbling within.

The stuffing has 32 ingredients, not counting MSG (optional), and takes two hours to assemble, longer if you pause periodically, as Thompson advised, for a drink. It is a mixture of meat (veal and pork), fruit (apples, oranges and even pineapple), garlic, lemon and preserved ginger, every spice and herb on your rack and lots of water chestnuts to give it crunch.

Thompson doesn’t say so, but I suspect you could throw in anything else short of bananas and it would get better still.

The result is a mad melange of tastes, crisp and rich and fresh and moist, trading flavors with the surrounding turkey, to their huge mutual benefit. This stuffing is the key to the recipe’s success. Like first love, it is one of life’s experiences, never to be forgotten.

The paste is more controversial. It combines egg yolks, mustard, onion, lemon juice, garlic, ground red pepper and flour and is slathered on the turkey at 5 minute intervals, early in the cooking, with the bird turned at each pasting, until the paste is gone. By the time the turkey is done, this paste coating will have turned black, leading to the dread suspicion that you have just burned Thanksgiving dinner to a crisp.

Not to worry. Thompson advises that this blackened coating can be peeled off easily with tweezers, revealing underneath a browned and crackling skin and, beneath that, the meat of the turkey, drunk on its own juices, carefully preserved within the now-discarded shell, and dizzy with the flavors and scents of the stuffing that lie at the heart of the matter.

Like any work of art, Thompson’s turkey is open to interpretation. The Thompson creed has its heretics and apostates, willing to trifle with the master recipe, especially where the paste is concerned.

I have cooked Thompson’s turkey both with and without the paste. Either way, it is the best turkey ever cooked. It is better with the paste, but possibly not worth the repeating turns and the damage the hard coating can do to the skin. Contrary to Thompson’s assurances, removing the blackened coat can also remove a good chunk of the skin. In addition, by the second or third pasting, the turkey becomes as slick as a greased pig and as hard to handle.

Jeffrey Steingarten, food critic for Vogue magazine, suggests solving all these problems by leaving the turkey in its rack, breast side up, and pasting it without turning it. I endorse this suggestion heartily. Steingarten also suggests oiling the skin before pasting, to make the coating come off more easily. In fact, the skin should be oiled, even if the paste isn’t used, to make it crisp and crunchy.

(There also is a separate basting liquid, based on hard cider, and the turkey needs basting every 15 minutes from start to finish. Don’t complain: You don’t cook this bird unless you’re willing to work.)

Other changes are the cook’s choice. Thompson suggested one can of water chestnuts, chopped in half, in the stuffing: I prefer two cans, sliced. Thompson called for poultry seasoning but Steingarten improves this with a tablespoon each of fresh thyme and sage. Dried herbs can be used throughout but fresh herbs are better if you can find them: If using fresh, multiply the recipe by three.

Here, then, is the recipe for Thompson’s turkey, created by Morton Thompson, modified over the years by his acolytes and guaranteed to make you a legend in your own kitchen. An occasional belt of wine is not included but should be: This turkey can take eight hours from start to finish, and even cooks cannot live by Thompson’s turkey alone.

1. Trim fat from inside the turkey; mince fat. Place in saucepan with ½ cup of the water; heat to a boil. Cook until water has evaporated, about 5 minutes; set aside. Rub turkey inside and out with salt and pepper. Oil turkey skin thoroughly with vegetable oil. Set liver aside. Chop gizzard, neck and heart; put in saucepan with 5 cups of the water, bay leaf, garlic, paprika, salt and coriander. Simmer, uncovered, about 1 hour, while proceeding with rest of recipe.

4. Turn oven to 325 degrees. Paint turkey all over with the paste, using a kitchen brush. Return turkey to oven 3-5 minutes, until paste sets. Paint again; return to oven. Repeat this painting every 3-5 minutes, adding lemon juice to the paste as necessary to keep from drying out, until paste is used up. Meanwhile, add the reserved turkey liver and 1 cup of the hard cider to the simmering basting liquid. Cook until liver is no longer pink, about 30 minutes; remove liver. Keep liquid on simmer.