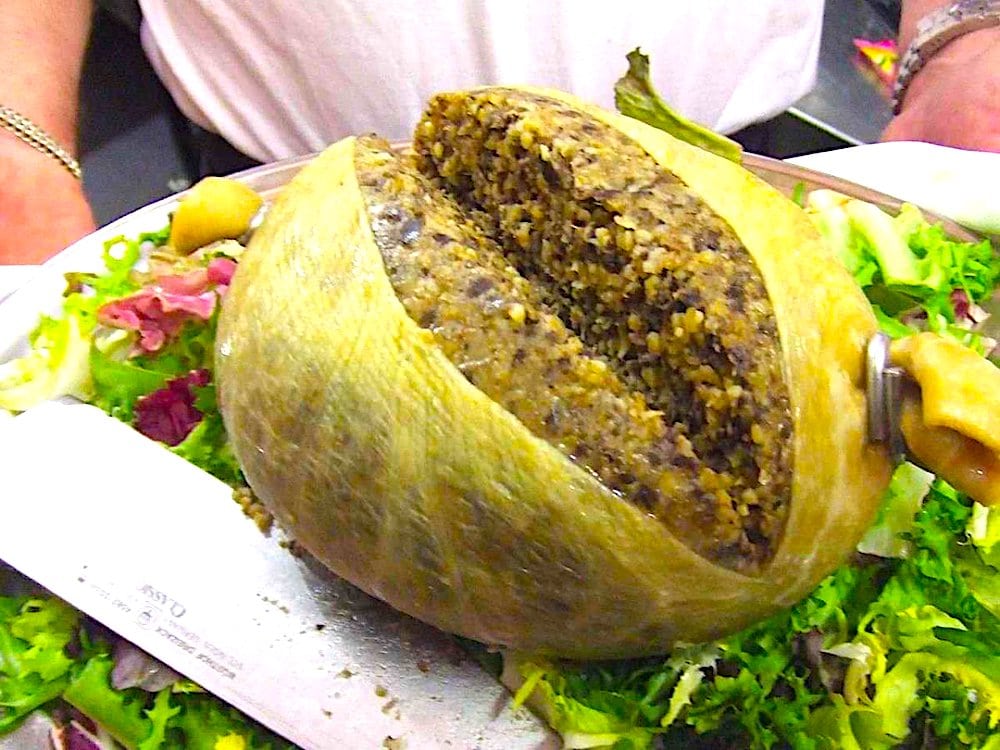 Citizens – once again, allow the undimmed light that alone is TFD to wish you – His beloved co-members of TFD Nation – the merriest Christmas! In part 2 of our lost UK Christmas recipes, we have one that is truly special! As you all probably know, TFD delights in preserving anything lost or nearly lost for posterity – in this especial case, both a language AND a recipe from the Isle of Man!

You may be familiar with haggis, the Scottish national dish made from the diced internal organs of a sheep, oatmeal and cooked in a sheep’s stomach.

However, there is another version unique to the Isle of Man that is traditionally served on Christmas day that I will now share with you all! Since this is an almost extinct recipe, I will not alter it in any way and as such, it will not have my name in it as so many do here on TFD.

Manx (native name Gaelg or Gailck, pronounced [ɡilg] or [ɡilk]), also known as Manx Gaelic, and also historically spelled Manks, is a Goidelic Celtic language spoken as a first language by the Manx people on the Isle of Man until the death of the last native speaker, Ned Maddrell, in 1974. This is in vast difference to the other branches of Gaelic in Wales, Ireland and Scotland where their versions of Gaelic are spoken by large swaths of the population. Sadly, Cornish Welsh is now fully extinct in its native Cornwall.

Despite this, the Manx language has never fallen completely out of use, with a minority having some knowledge of it; in addition, Manx still has a role as an important part of the island’s culture and heritage. Manx has been the subject of language revival efforts with estimates, in 2015, of around 1,800 people with varying levels of second language conversational ability.

Since the late 20th century, Manx has become more visible on the island, with increased signage, radio broadcasts and a bilingual primary school. The revival of Manx has been made easier because the language was well-recorded; for example, the Bible had been translated into Manx, and audio recordings had been made of native speakers.

Manx is a Goidelic language, closely related to Irish and Scottish Gaelic. On the whole it is partially mutually intelligible with these, and native speakers of one find it easy to gain passive, and even spoken, competency in the other two.

The earliest known language of the Isle of Man was a form of Brythonic (the language which developed into Welsh, Cornish and Breton); however, like Scottish Gaelic and modern Irish, Manx is descended from Primitive Irish, which is first attested in Ogham inscriptions from the 4th century AD.

These writings have been found throughout Ireland and the west coast of Great Britain. Primitive Irish transitioned into Old Irish through the 5th century. Old Irish, dating from the 6th century, used the Latin script and is attested primarily in marginalia to Latin manuscripts, but there are no extant examples from the Isle of Man.

By the 10th century Old Irish had evolved into Middle Irish, which was spoken throughout Ireland, in Scotland and in the Isle of Man. Like the coastal areas of Scotland and Ireland, the Isle of Man was colonised by the Norse, who left their legacy in certain loanwords, personal names, and place names such as Laxey (Laksaa) and Ramsey (Rhumsaa). However, they made very little impact on the language overall.

During the later Middle Ages, the Isle of Man fell increasingly under the influence of England, and from then on the English language has been the chief external factor in the development of Manx. Beginning in 1405, Manx experienced even more English influence under the rule of Sir John Stanley. As contact between Manx speakers and Gaelic speakers from Scotland and Ireland declined, the language diverged further from its related neighbours.

In the 17th century, some university students left the Isle of Man to attend school in England. At the same time, teaching in English was required in schools founded by governor Isaac Barrow. Barrow also promoted the use of English in churches; he considered that it was a superior language for reading the Bible; however, because the majority of ministers were monolingual Manx speakers, his views had little practical impact.

Thomas Wilson began his tenure as Bishop of Mann in 1698 and was succeeded by Mark Hildesley. Both men held positive views of Manx; Wilson was the first person to publish a book in Manx, a translation of The Principles and Duties of Christianity (Coyrie Sodjey), and Hildesley successfully promoted the use of Manx as the language of instruction in schools.

The New Testament was first published in Manx in 1767. In the late 18th century, nearly every school was teaching in English. This decline continued into the 19th century, as English gradually became the primary language spoken on the Isle of Man.

Since the language was used by so few people, it had low linguistic “prestige”, and parents tended to not teach Manx to their children, thinking it would be useless to them compared with English.

Following the decline in the use of Manx during the 19th century, Yn Çheshaght Ghailckagh (The Manx Language Society) was founded in 1899. The Manx Language Unit was formed in 1992, consisting of three members and headed by Manx Language Officer Brian Stowell, “which was put in charge of all aspects of Manx language teaching and accreditation in schools.” This led to an increased interest in studying the Manx language and encouraged a renewed sense of ethnic identity.

The revival of Manx has been aided by the recording work done in the 20th century by researchers. Most notably, the Irish Folklore Commission was sent in with recording equipment in 1948 by Éamon de Valera.

Also important in preserving the Manx language was work conducted by language enthusiast and fluent speaker Brian Stowell, who is considered personally responsible for the current revival of the Manx language. The Manx Language Strategy was released in 2017, outlining a five-year plan for the language’s continued revitalization.

In 2009, Unesco’s Atlas of the World’s Languages in Danger declared Manx as an extinct language, despite the presence of hundreds of speakers on the Isle of Man. Since then, Unesco’s classification of the language has changed to “critically endangered”.

Those who have learned Manx as a second language as part of the Manx language revival speak what has been called “Neo-Manx”. In Neo-Manx the grammar is different to the Manx spoken to by native speakers like Ned Maddrell and English words have been resubstituted by Gaelic words, leading some to say the new speakers of the language are not speaking “true Manx”.

As noted on oakden.co.uk, where I discovered this recipe:

Mollag is a Manx word, and for those of you who don’t know Manx is the language spoken on the Isle of Man, an island situated between Cumbria/Scotland and Northern Ireland in the Irish Sea. Mollag is the local name given to a round fishing float, or larger round buoy from a boat or fishing net used in the waters around the Isle of Man. The size and shape of a ‘mollag’ is what obviously gave rise to the name of the Manx Haggis, this dish is eaten all year round, but it was also traditionally fried and served at breakfast on Christmas Day morning.

Do you need to have nerves of steel to make this recipe and eat it? Using good quality offal is no different to using a good quality cut of meat. It really is very tasty, and you should not be put off from making it. Your guests or family will love it, just don’t tell them what was in it until after the meal – serve it with steamed seasonal vegetables and a lamb gravy.

In recent years, the Anglo-Manx dialect has almost disappeared in the face of increasing immigration and cultural influence from the mainland UK. Only a few original words remain in general use now. However, below is the original recipe for Mollag written out in Manx, and to help celebrate the Manx Language we are bringing this recipe front and centre, and we hope that you will tell your guests that this is a Mollag and not a Haggis.

Get a sheep’s head, liver, heart, and lights from your butcher. Clean them well. Boil together the head, liver, heart and lights until they be tender. Take the meat of the head and chop all finely together with onions, pepper and salt according to taste. Put in a few handfuls of coarse oatmeal. (Some people like potatoes cut very thin put in it also.) Mix all well together and sew up in haggis. Tie up tightly in a cloth and boil for 3 or 4 hours. Serve up hot with boiled potatoes. Save the gravy of the first boiling for the potatoes. It may also be served cold with bread and butter.

Give your local butcher a few days notice to get you all the ingredients you want. The only alteration made to this traditional ingredient list is the omission of the meat from the sheep’s head, in favour of lamb mince, (but you can easily boil a sheep’s head and strip the meat off it, if you order one). We have given two ways to cook the Mollag, one by boiling it in the traditional sheep stomach, the other by steaming it in a pudding basin.

The highest grade of lard is known as ‘leaf lard’, and it is obtained from the ‘flare’, the fat surrounding the kidneys and loin of the pig. Ask your butcher for it when you order the lamb mince, lamb heart and lamb liver. To save time you can ask your butcher to trim and mince together the lamb meat, heart and liver for you.

This may not be a dish you will ever make, but I hope you will try at least once to help keep this lost recipe from disappearing forever into obscurity!