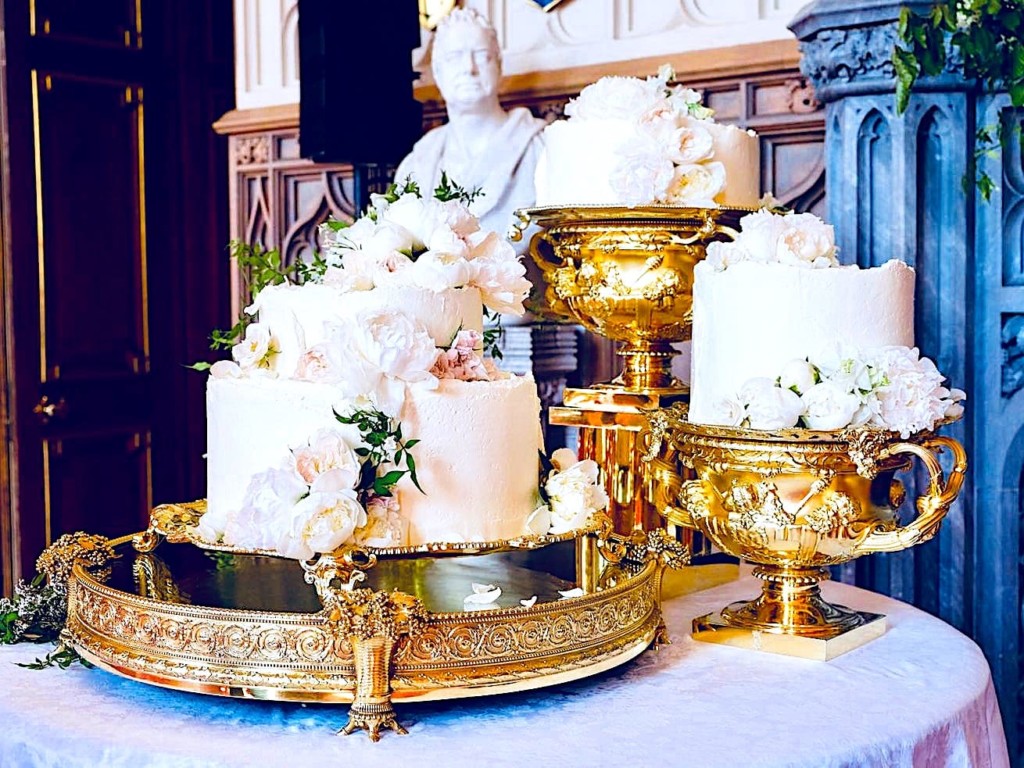 Citizens, it is not well-known that the all-powerful TFD has met a member of the British Royal family – HRH Prince William! As a fellow monarch (of all things gustatory), I am delighted to wish his brother and new wife every happiness as they start their new lives together!

Their wedding cake – not unexpectedly – is amazing, and I wish to share the recipe with the Citizens of TFD Nation!

A wedding cake is the traditional cake served at wedding receptions following dinner. In some parts of England, the wedding cake is served at a wedding breakfast; the ‘wedding breakfast’ does not mean the meal will be held in the morning, but at a time following the ceremony on the same day. In modern Western culture, the cake is usually on display and served to guests at the reception.

Traditionally, wedding cakes were made to bring good luck to all guests and the couple. Modernly however, they are more of a centerpiece to the wedding and are not always even served to the guests. Some cakes are built with only a single edible tier for the bride and groom to share, but this is rare since the cost difference between fake and real tiers is minimal.

Wedding cakes come in a variety of sizes, depending on the number of guests the cake will serve. Modern pastry chefs and cake designers use various ingredients and tools to create a cake that usually reflects the personalities of the couple. Marzipan, fondant, gum paste, buttercream, and chocolate are among the popular ingredients used. Cakes range in price along with size and components. Cakes are usually priced on a per-person, or per-slice, basis.

Prices can range from a few dollars to a few hundred dollars per-person or slice, depending on the pastry chef who is hired to make the cake. Wedding cakes and cake decorating in general have become a certain pop culture symbol in western society. In the United States, reality television shows such as Cake Boss and Amazing Wedding Cakes have become popular and are trending in today’s popular culture.

The contemporary wedding cake has grown out of several different ethnic traditions. One of the first traditions began in Ancient Rome where bread was broken over the bride’s head to bring good fortune to the couple.

Wedding cake was originally a luxury item, and a sign of celebration and social status. The bigger the cake, the higher the social standing. Wedding cakes in England and early America were traditionally fruit cakes, often topped with marzipan and icing with tiers, Cutting the cake was an important part of the reception. White icing was also a symbol of money and social importance in Victorian times, so a white cake was highly desired. Today, many flavors and configurations are available in addition to the traditional all-white tiered cake.

In Medieval England cakes were stacked as high as possible for the bride and groom to kiss over. A successful kiss meant they were guaranteed a prosperous life together. From this the Croquembouche was created. The myth behind this cake tells of a Pastry chef, visiting Medieval England who witnessed their tradition of piling sweet rolls between the bride and groom, which they attempted to kiss over without knocking them all down. The pastry chef then went back to France and piled sweet rolls up into a tower to make the first Croquembouche.

The modern croquembouche is still very popular in France, where it is now common to place the croquembouche tower on a bed of cake and make it a top tier. This traditional French wedding cake is built from Profiteroles and given a halo of spun sugar.

In 1703, Thomas Rich, a baker’s apprentice from Ludgate Hill, fell in love with his employer’s daughter and asked her to marry him. He wanted to make an extravagant cake, so he drew on St Bride’s Church, on Fleet Street in London for inspiration.

Traditionally the bride would place a ring inside the couple’s portion of the cake to symbolize acceptance of the proposal. During the mid-17th century to the beginning of the 19th, the “bride’s pie” was served at most weddings. Guests were expected to have a piece out of politeness. It was considered very rude and bad luck not to eat the bride’s pie. One tradition of bride’s pie was to place a glass ring in the middle of the dessert and the maiden who found it would be the next to marry, similar to the modern tradition of catching the Flower bouquet. Bride’s pie would evolve into the bride’s cake.

At this point the dessert was no longer in the form of a pie and was sweeter than its predecessor. The bride cake was traditionally a plum or fruit cake. The myth that eating the pie would bring good luck was still common but the glass ring slowly died out and the flower bouquet toss replaced it.

In the early 19th century, sugar became easier to obtain during the time when the bride’s cakes became popular. The more refined and whiter sugars were still very expensive. so only wealthy families could afford to have a very pure white frosting. This display would show the wealth and social status of the family. When Queen Victoria used white icing on her cake it gained a new title, royal icing.

The modern wedding cake as we know it now would originate at the 1882 wedding of Prince Leopold, Duke of Albany; his wedding cake was the first to actually be completely edible. Pillars between cake tiers did not begin to appear until about 20 years later. The pillars were very poorly made from broomsticks covered in icing. The tiers represented prosperity and were a status symbol because only wealthy families could afford to include them in the cake.

Prince Leopold’s wedding cake was created in separate layers with very dense icing. When the icing would harden the tiers could be stacked, a groundbreaking innovation for wedding cakes at the time. Modern wedding cakes still use this method, with an added form of support with dowels imbedded in the cake to help carry the load especially of larger cakes.

Wedding cakes have been present at wedding ceremonies for centuries. They were not always the focus of the event and often came in different forms, like pies or bread. There has always been a lot of symbolism associated with the wedding cake. The earliest known sweet wedding cake is known as a Banbury cake, which became popular in 1655.

The white color has been attached to wedding ceremonies since the Victorian era when Queen Victoria chose to wear a white wedding dress at her wedding to Prince Albert in 1840. Queen Victoria accentuated an existing symbol, the color white is frequently associated with virginity and purity. The wedding cake was originally known as the brides cake therefore the color white became common because the cake needed to reflect the bride.

The cutting of the cake is a task full of symbolism. The cake was originally intended to be distributed among the guests by only the bride because consuming the cake would ensure fertility. As weddings grew and the number of guests increased this task became a joint venture, the groom needed to help cut the growing cake and distribute it among their guests. Layers of cakes began to pile up and the icing would need to support the weight of the cake making is very difficult for one person to cut. The groom would assist the bride in this process. Once this tradition began the bride and groom would share a piece of cake before distributing it to the guests to symbolize their union and their promise to forever provide for each other.

The wedding cake is surrounded by superstitions. In a traditional American wedding, maidens would be invited to pull ribbons that are attached to the bottom layer of the wedding cake. Out of all the ribbons, only one contains a charm or a ring, and whoever gets the charm will be the next person to marry. In other countries, the wedding cake is broken over the bride’s head to ensure fertility and bring good fortune to the couple. Also, some people today think that eating the crumbs of the wedding cake would give them good luck because the wedding cake symbolizes happiness and good life to the newlywed couple.

In the medieval era, wedding cakes were constructed in rolls and buns that were laid on top of each other. The groom and bride would attempt to share a passionate kiss on top of the stack of rolls to ensure fertility and have good fortune. In the 18th century, newlywed couples would try to keep the cake until their first anniversary to prevent them from marriage problems in the future. This is one of the reasons why cakes in the 18th century were made of fruits and blended with wine.

Citizens, this is a magnificent cake that I hope you someday decide to try, regardless of whether it’s for a wedding or a more mundane celebration. 🙂

Add
212shares
TFD uses cookies and we comply with GDPR so you control your personal info! If you continue on, we will assume you are happy with this, Citizen! OkNoRead more