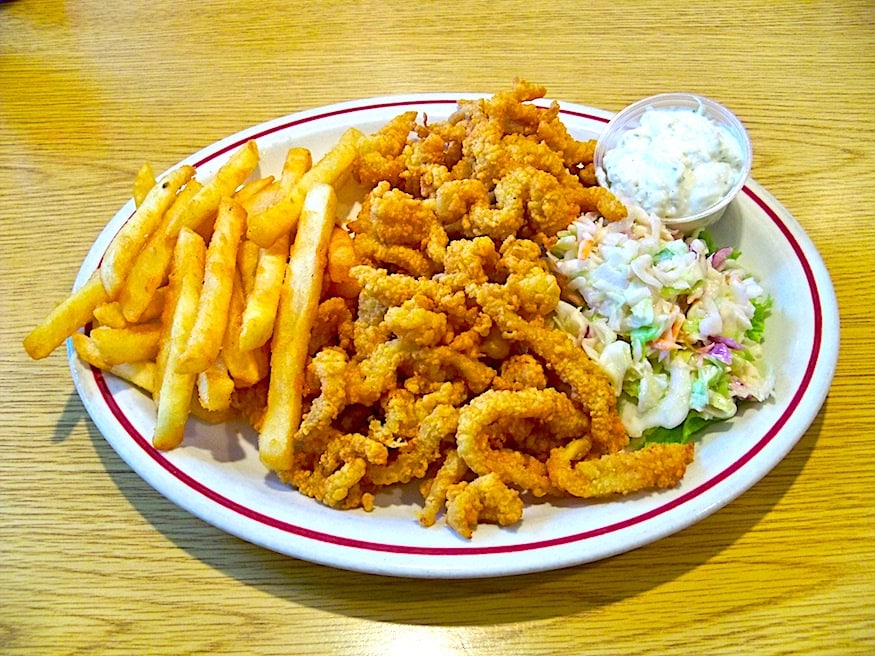 My Citizens, we are in the home stretch of our 7-day blowout of ‘recipes from famous closed restaurants’ – and with this one, we have now entered the murky waters of fast food from the days of yore! When I was a child, my grandmother Helen used to take me out to enjoy my favorite meal when we visited her in Manhattan – to Howard Johnson’s for a big plate of fried clam strips!

In 1925, Howard Deering Johnson borrowed $2,000 to buy and operate a small corner pharmacy in Wollaston, a neighborhood in Quincy, Massachusetts. Johnson was surprised to find it easy to pay back the money lent to him, after discovering his recently installed soda fountain had become the busiest part of his drugstore.

Eager to ensure that his store would remain successful, Johnson decided to come up with a new ice cream recipe. Some sources say the recipe was based on his mother’s homemade ice creams and desserts, while others say that it was from a local German immigrant, who either sold or gave Johnson the ice cream recipe.

Regardless, the new recipe made the ice cream more flavorful due to an increased content of butterfat. Eventually Johnson came up with 28 flavors of ice cream. Johnson is quoted as saying, “I thought I had every flavor in the world. That ’28’ (flavors of ice cream) became my trademark.”

Throughout the summers of the late 1920s, Johnson opened up concession stands on beachfront property along the coast of Massachusetts. The stands sold soft drinks, hot dogs, and ice cream. Each stand proved to be successful.

With his success becoming more noticeable every year, Johnson convinced local bankers to lend him enough money to operate a sit-down restaurant. Negotiations were made and, toward the end of the decade, the first Howard Johnson’s restaurant opened in Quincy. The first Howard Johnson’s restaurant featured fried clams, baked beans, chicken pot pies, frankfurters, ice cream, and soft drinks.

The first Howard Johnson’s restaurant and Howard Johnson’s company received an incredible break in 1929, owing to an unusual set of circumstances: The mayor of nearby Boston, Malcolm Nichols, banned the planned production of Eugene O’Neill’s play, Strange Interlude, in the city of Boston. Rather than fight the mayor, the Theatre Guild moved the production to Quincy.

The five-hour play was presented in two parts with a dinner break. The first Howard Johnson’s restaurant was near the theater; hundreds of influential Bostonians flocked to the restaurant. Through word of mouth, more Americans became familiar with the Howard Johnson’s company.

Johnson wanted to expand his company, but the stock market crash of 1929 prevented him from doing so. After waiting a few years and maintaining his business, Johnson was able to persuade an acquaintance in 1932 to open a second Howard Johnson’s restaurant in Orleans, Massachusetts. The second restaurant was franchised and not company-owned. This was one of America’s first franchising agreements.

The unique icons of orange roofs, cupolas, and weather vanes on Howard Johnson properties helped patrons identify the chain’s restaurants and motels. The restaurant’s trademark Simple Simon and the Pieman logo was created by artist John Alcott in the 1930s.

By 1944, only 12 Howard Johnson’s restaurants remained in business. The effects of war rationing had crippled the company. Johnson managed to maintain his business by serving commissary food to war workers and U.S. Army recruits. When the Pennsylvania Turnpike (1940), and later the Ohio Turnpike, New Jersey Turnpike and Connecticut Turnpike were built, Johnson bid for and won exclusive rights to serve drivers at service station turnoffs through the turnpike systems.

By 1954, there were 400 Howard Johnson’s restaurants in 32 states, about 10% of which were extremely profitable company-owned turnpike restaurants; the rest were franchises. This was one of the first nationwide restaurant chains.

In 1961, Johnson hired famed New York chefs Pierre Franey and Jacques Pépin to oversee food development at the company’s main commissary in Brockton, Massachusetts. Franey and Pépin developed recipes for the company’s signature dishes that could be flash frozen and delivered across the country, guaranteeing a consistent product.

While many places sold “fried clams”, they were whole, which was not universally accepted by the American dining public. Howard Johnson popularized Soffron Brothers Clam Company’s fried clam strips: the “foot” of hard-shelled sea clams. They became popular to eat in this fashion throughout the country.

I found this description and recipe at splendidtable.com:

As a large restaurant chain, Howard Johnson’s relied on a commissary system of centralized kitchens. The clams would have been prepared as strips by the supplier, but here the whole clam body is fried. Individual recipes of this size were adaptations for family cooks, but nevertheless, the result is an authentic evocation of the chain’s most famous dish.

Citizens, this is delicious and proof that fast food can be delicious when well-made. I hope you enjoy it (with cocktail or tartar sauce) as much as I did growing up.