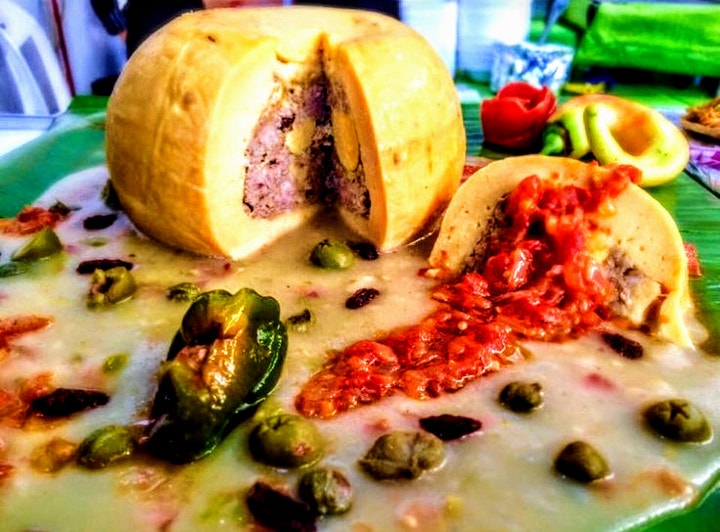 Citizens, your glorious leader is currently visiting the Yucatan peninsula in Mexico, exploring the hoary antiquity and grandeur of the Mayan ruins and experiencing the hospitality of family who emigrated to Mexico from the United States a decade ago!

Yucatan has a number of unique dishes – some imported from other countries and others indigineous to the local Maya. This rich and delicious recipe is in the former category.

As noted in “The Book of Latin American Cooking” by E.L. Ortiz:

This dish, though popular for a long time in its birthplace, the Caribbean island of Curaçao (where it is called Keshy Yena in the patois of the island), was introduced to Yucatan by Dutch and German coffee men sometime in the last century.

Its foreign origins are obvious in that a Dutch Edam cheese is the main ingredient, hollowed out and stuffed with a rich pork mixture.

For some reason Yucatecans almost invariably use saffron rather than achiote, which is more characteristic of their kitchen, and they usually steam rather than bake the cheese; the sauce, too, is a further Mayan enhancement.

The dish looks quite spectacular when brought to the table as the cheese expands during the cooking and, when cut into wedges and served, the soft cheese shell combines deliciously with the pork filling. All that is needed as an accompaniment is a salad.

Citizens, I hope you will sample this remarkable recipe for yourselves and join with me in celebrating the cuisine of this magnificent part of Mexico!