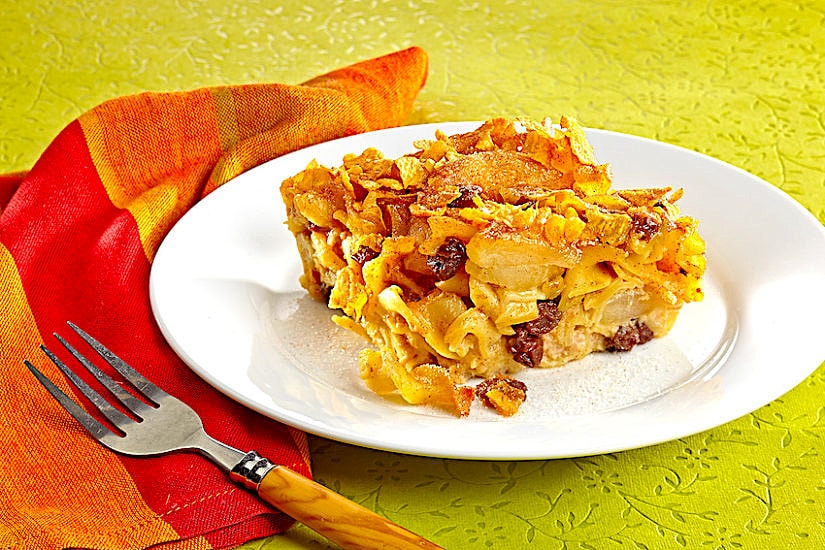 Citizens, we are coming up on the holiest holiday of the Jewish year: Yom Kippur, the Day of Atonement. Jews across the world will be in Temple all day, fasting and then breaking the fast at sundown – traditionally with a noodle kugel, at least by eastern European (Ashkenazi) Jews. This sweet and incredibly fattening dish is a time-hallowed tradition and I will now share my version of this recipe with you! 🙂

Kugel is a baked pudding or casserole, most commonly made from egg noodles (Lokshen kugel) or potato. It is a traditional Ashkenazi Jewish dish, often served on Shabbat and Yom Tov. Lokshen (noodle) kugel is how the dish is best known today, though there are many other variations.

The name of the dish comes from the Middle High German kugel meaning “sphere, globe, ball”; thus the Yiddish name likely originated as a reference to the round, puffed-up shape of the original dishes (compare to German Gugelhupf—a type of ring-shaped cake). Nowadays, however, kugels are often baked in square pans.

The first kugels were made from bread and flour and were savory rather than sweet. About 800 years ago, cooks in Germany replaced bread mixtures with noodles or farfel. Eventually eggs were incorporated.

In the late 19th century, Jerusalemites combined caramelized sugar and black pepper in a noodle kugel known as “Yerushalmi kugel” or “Jerusalem kugel,” which is a commonly served at Shabbat kiddushes and is a popular side dish served with cholent during Shabbat lunch.

In Romania, this dish is called Budinca de Macaroane/Paste Fainoase (Maccaroni/Pasta Pudding), and it is a traditional Romanian dish. In certain villages throughout the country it is known as “Baba Acolo”. It is made with or without cheese, but it most always includes raisins.

Older Jews will remember the Yiddish aphorism, “Vos wys a gazzer vun Lokshen?” (What does a pig know about Lokshen?).

My version of this recipe includes a veritable fruit salad in the kugel (including Maraschino cherries in a nod to my grandmother’s kugel!), Grand Marnier-soaked golden raisins, and a cardamom/nutmeg sugar in place of the traditional cinnamon. I also specify vanilla paste (available in baking supply stores and Amazon) for a stronger vanilla flavor.  Lastly – a hint of Bailey’s Irish Cream! Many thanks to my friend Jonathan who asked me for my version of Kugel and inspired me to create this in the first place! 🙂

Add
1260shares
TFD uses cookies and we comply with GDPR so you control your personal info! If you continue on, we will assume you are happy with this, Citizen! OkNoRead more