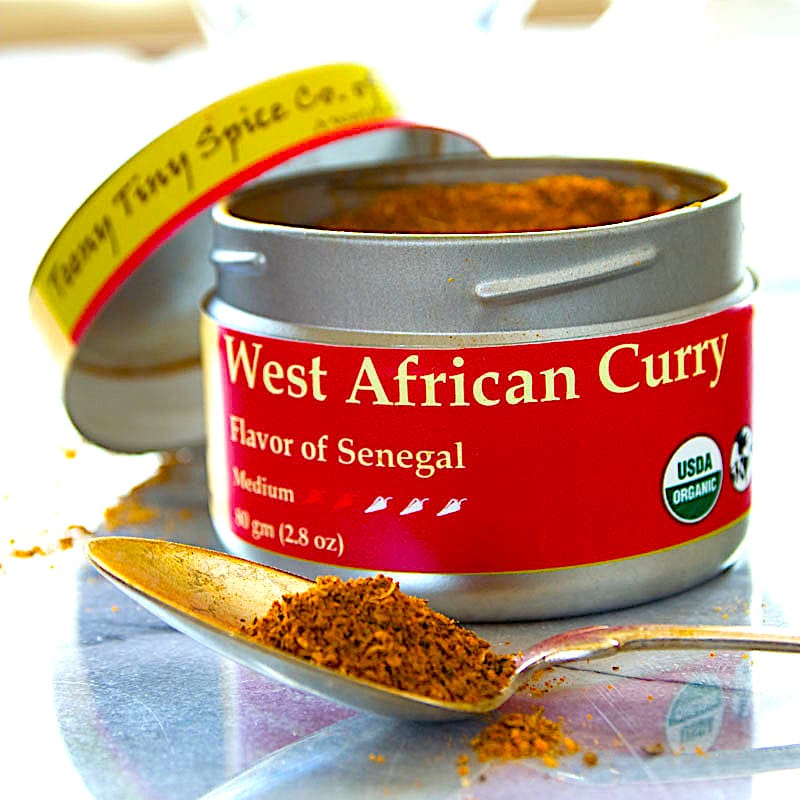 Citizens, it is an established fact that the sovereign of sagacity – I, the mighty TFD – am extremely fond of all recipes that pile on the spice. This unique curry spice from West Africa truly hits the high C in my oratorial solo of flavors!

West African curry is very different than the classic Indian version, incorporating any number of uniquely African ingredients that are specific to this continent and region.

West African cuisine encompasses a diverse range of foods that are split between its 16 countries. In West Africa, many families grow and raise their own food, and within each there is a division of labor. Indigenous foods consist of a number of plant species and animals, and are important to those whose lifestyle depends on farming and hunting.

The history of West Africa also plays a large role in their cuisine and recipes, as interactions with different cultures (particularly the Arab world and later Europeans) over the centuries have introduced many ingredients that would go on to become key components of the various national cuisines today.

Centuries later, the Portuguese, French and British further influenced regional cuisines, but only to a limited extent. However, as far as it is known, it was European explorers and slaves ships who brought chili peppers and tomatoes from the New World, and both have become ubiquitous components of West African cuisines, along with peanuts, corn, cassava, and plantains.

In turn, these slave ships carried African ingredients to the New World, including black-eyed peas and okra. Around the time of the colonial period, particularly during the Scramble for Africa, the European settlers defined colonial borders without regard to pre-existing borders, territories or cultural differences. This bisected tribes and created colonies with varying culinary styles.

As a result, it is difficult to sharply define, for example, Senegalese cuisine. Although the European colonists brought many new ingredients to the African continent, they had relatively little impact on the way people cook in West Africa. Its strong culinary tradition lives on despite the influence of colonization and food migration that occurred long ago.

Spices play a relatively less prominent role in West African cooking compared to say, North African cuisine. Cooks use spices and herbs like ginger, coriander, and thyme sparingly but knowingly. Chili peppers however are immensely loved in West Africa, both in fresh or dried and powdered form, particularly in the more hot-and-humid lands of the region.

Introduced to Africa probably sometime soon after Christopher Columbus sailed to America by European sailors, it is said that the sweating induced by the spicy heat of chili helps to air-condition your skin.

More than in other regions of Africa, West Africans utilize Scotch bonnet chile peppers with a liberal hand in many of their sauces and stews. The bite and fire of these extremely hot peppers (Scoville rating 200,000 – 300,000) add a unique flavor as well as heat. The chile is also supposed to help preserve food, as well as adding flavor to relatively bland tropical staples like root vegetables.

The seeds of Guinea pepper (Aframomum melegueta; also called grains of paradise or melagueta pepper), a plant indigenous to West Africa, are also widely used. This native spice tastes and looks somewhat like a peppercorn, but has cardamom and coriander seed flavor notes. The grains of paradise was once a prized commodity reaching Europe through North African middlemen, during the Middle Ages.

Citizens, this is a great (and very spicy!!!) recipe and I hope you enjoy it! 😀

Do NOT follow this link or you will be banned from the site! Click here to see our Privacy Policies, Citizen!
2195shares
wpDiscuz
0
0
Would love your thoughts, please comment.x
()
x
| Reply