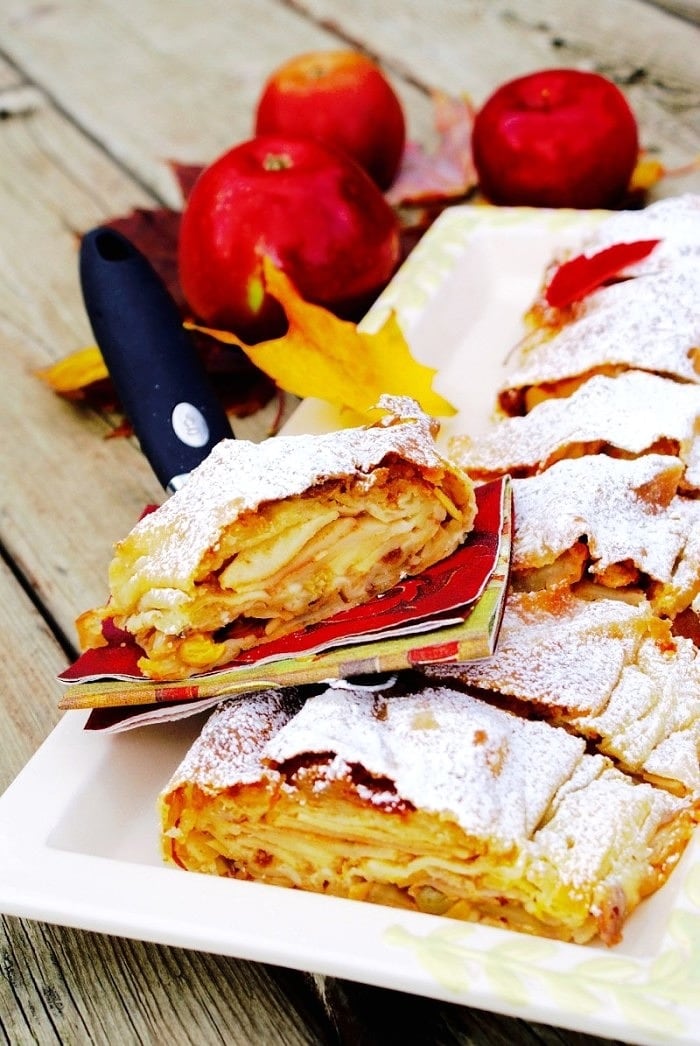 Citizens, Apple strudel (German: Apfelstrudel) is a traditional Viennese strudel, a popular pastry in Austria and in many countries in Europe that once belonged to the Austro-Hungarian empire (1867–1918).

Lo strudel, štrudla and štrůdl – these are the names given by Austria’s neighbors in Italy, Slovakia and the Czech Republic to this sweet dessert of light pastry and its delicious filling. It is also known as “jabolčni zavitek” in Slovenian and Almásrétes in Hungarian.

However, in English, the only word which has made it into common use is the German “Strudel”. That shows just how famous the Viennese Apfelstrudel has become.

“Strudel” derives from the Middle High German word for “whirlpool” or “eddy”. It refers to the technique and effect of rolling up of a generous fruit filling in a paper thin unleavened dough.

It’s all too easily forgotten that this fine pastry once travelled an extensive route from Arabia via the Ottoman Empire and Turkey, before becoming resident in Vienna. However, the long journey was worth it!

The oldest known strudel recipe is from 1696, a handwritten recipe housed at the Wienbibliothek im Rathaus.

Whether as a type of sweet or savoury layered pastry with a filling inside, the strudel gained popularity in the 18th century through the Habsburg Empire (1278–1780).

Strudel is related to the Ottoman Empire’s pastry baklava, and came to Austria via Turkish to Hungarian and then Hungarian to Austrian cuisine.

Strudel is most often associated with the Austrian cuisine, but is also a traditional pastry in the whole area formerly belonging to the Austro-Hungarian empire. In these countries, apple strudel is the most widely known kind of strudel.

Apple strudel is considered to be the national dish of Austria along with Wiener Schnitzel and Tafelspitz.

Citizens, my apfelstrudel recipe is not easy or for those uncomfortable with pastry – but it is extraordinary and well worth trying! 🙂 Serve it as part of a multi-course meal, which must – of course – include Wiener Schnitzel as a main course!