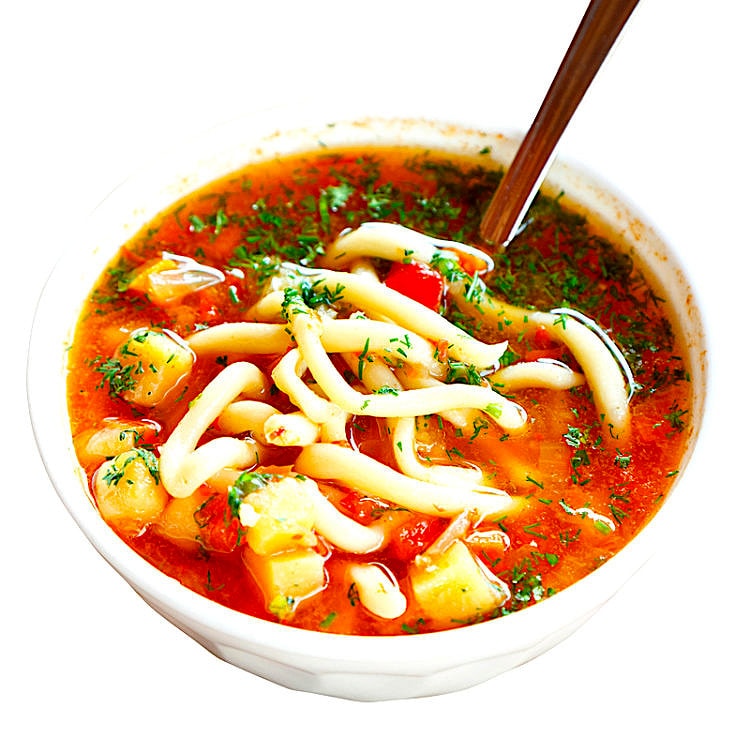 Citizens, the ancient country of Uzbekistan is home to many fantastic recipes, several of which you will find here on TFD – just use the search button to find them! One great recipe that I have not yet shared with you is for the mighty Lagman soup, a treasured recipe enjoyed all over the former Silk Road countries.

Uzbek cuisine shares the culinary traditions of Turkic peoples across Central Asia. There is a great deal of grain farming in Uzbekistan, so breads and noodles are of importance, and Uzbek cuisine has been characterized as “noodle-rich”.

Mutton is a popular variety of meat due to the abundance of sheep in the country and it is a part of various Uzbek dishes. Outside of Uzbekistan, as mutton is hard to find, lamb is frequently substituted. Uzbekistan is near to where garlic was first domesticated, and has a plethora of unique varieties.

My favorite is Kitab, which botanist John Swenson and the USDA team found growing in a dry riverbed in the mountains of Uzbekistan. The bulbs were buried so deeply that only a few heads could be removed, these are the ancestors of all Kitab garlic grown in the United States.

It was noted by Uyghur linguist Abdlikim that words that begin with “L” are not native to Turkic languages such as Uzbek, so that Lagʻmon is almost certainly a loanword of Chinese derivation from “lamian” (noodles).

This dish is especially popular in Kyrgyzstan and Kazakhstan, where it is considered a national dish of the local Uyghur and Dungan ethnic minorities. It is also popular in Uzbekistan, Tajikistan and northeastern Afghanistan, where chickpeas are added to it, and in the Chitral and Gilgit regions of northern Pakistan, where it is known as Kalli or Dau Dau.

Citizens, my version of this recipe is derived closely from the truly authentic version I discovered on boisdejasmin.com, with spices and ingredients adjusted to my personal taste. As noted on this passionate and aromatic blog for parfumiers and cooks alike:

When zeera, or black cumin, hits hot oil, the scent that rises up is complex and rich. It hovers above the sizzling pan as a warm cloud, woody, crisp, with sweet clove and leather undertones. Bunium persicum or black cumin is a plant in the same wonderful family, the Apiaceae or Umbelliferae, that gives us carrot, parsley, cumin, coriander, dill, caraway, fennel, parsnip, celery, and Queen anne’s lace among others. Its black slender crescents are similar to both caraway and cumin, but the flavor bears only a slight resemblance to either.

Lacking the intense animalic note of regular white cumin (Cuminum cyminum) and the musty darkness of caraway (Carum carvi), black cumin has an elegant flavor, possessing a hot sweetness and mineral chill. It has a natural affinity for meat, cruciferous vegetables, onions, garlic, and acidic vegetable-fruit like eggplant and tomato. It is able to refine their flavors, while retaining its own unique character.

Black cumin in widely used in Afghani, Pakistani and North Indian cooking, but it is Uzbek cuisine that truly extols black cumin. The Uzbek palette of flavors is bold, yet streamlined, which makes their dishes very memorable. In perfumery, black cumin can be found in fragrances such as Idole de Lubin, Cerruti 1881 Black and Kiss Him by Kiss.

Lagman, a lamb and vegetable noodle dish, is one of several signature Uzbek dishes, along with plov (lavish rice and lamb pilaf,) samsa (tandoor baked savory pastries,) manty (steamed dumplings,) and kebabs. Uzbekistan, a Central Asian country, is a part of the historically rich region that was overrun by several empires, from the Persian Samanid and later Timurid dynasties, to the Russian monarchy, to the Soviet Union. The traces of each marked this land, leaving its imprints in its peoples, its traditions and its food.

Lagman is a case in point. Brought to Central Asia by Chinese speaking Muslims, this dish shares many similarities with East Asian noodle soups. There are many varieties of lagman, ranging from the simple tomato and potato versions that I ate in Turkmenistan, to lo mein like stir fries, and to luxurious preparations in which noodles are pulled to be as thin as silk threads.

Despite the presence of lamb and noodles, this one course meal is not at all heavy. Made vibrant by a variety of vegetables and lavishly garnished with fresh aromatic herbs, each mouthful of lagman is an explosion of flavor. Vadzha, as the soup base is called in Uzbek, can be made in advance, and like most stewed dishes, it benefits from an overnight rest.

The noodles are cooked separately and are then combined with vadzha according to personal taste. Some people like to have more broth, some prefer their lagman on a drier side. Either way, it is a beautiful canvas against which to enjoy the voluptuous richness of black cumin.

I have every confidence you will LOVE this recipe, !