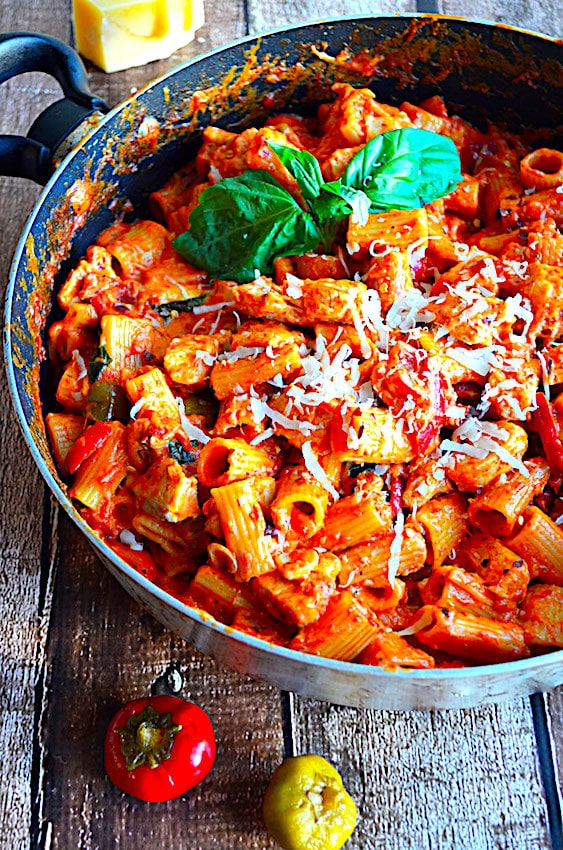 Citizens, today it is my great pleasure to share with you a recipe that is legendary in upstate NY – straight from the proud city of Utica!

Chicken riggies or Utica riggies is an Italian-American pasta dish native to the Utica-Rome area of New York State. It is a pasta-based dish usually consisting of chicken, rigatoni and hot or sweet peppers in a spicy cream and tomato sauce, although many variations exist.

The name “Chicken Riggies” is a Utica, NY, colloquialism and a household name known to everyone in Central New York. Utica, NY is so famous for its Chicken Riggies (rigatoni) that they actually have a much-publicized, annual “Riggies Fest” where people (and, restaurants) compete with their own version of the dish, and a winner is crowned every year.

The first annual Riggiefest was held in Utica, NY, in 2005 at the Utica Memorial Auditorium. It is a contest which determines what restaurant makes the best riggies in the area. The best riggies will win its creator the prestigious “Riggie Cup”. All money made during the fest is donated directly to the YWCA. In 2008, the festival made over $300,000.

Should you ever find yourself in Utica, Chesterfield’s Restaurant lays claim to having invented this dish.

Citizens, my version is based very closely on the original from Chesterfield’s own original Chef Joe Morelli. My innovation is to add peppadew peppers in with the hot cherry peppers for a sweet heat that is totally addictive! This is a simple recipe that is nonetheless totally delicious and does its native city of Utica proud amongst the world Citizens of TFD Nation! You will be proud to serve this at your dinner table and prepare for the compliments to follow!

Add
67shares
TFD uses cookies and we comply with GDPR so you control your personal info! If you continue on, we will assume you are happy with this, Citizen! OkNoRead more