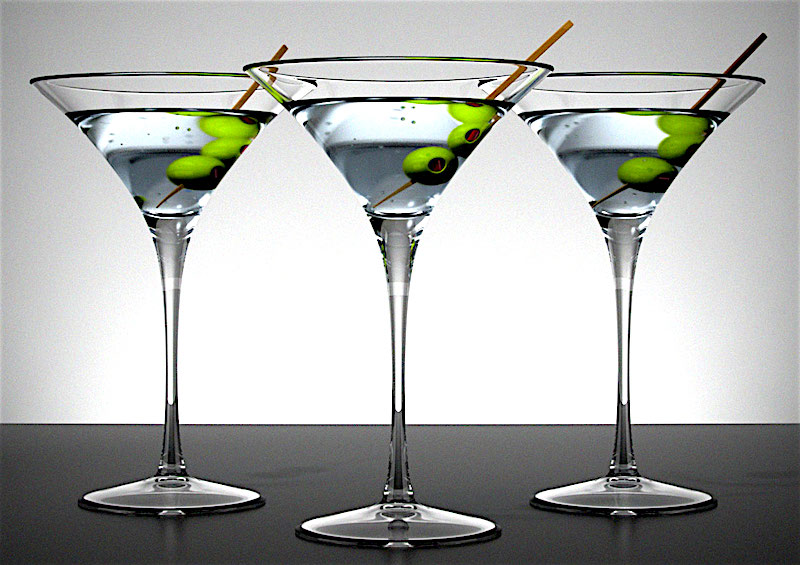 Citizens, Martini making is truly a study in alcohol alchemy! Practiced in secret chambers by apprentice mixologists, who watch in rapt attention as the hoary elder brews forth – via mystic conjurings and secret ritual – the long-sought Aqua Vitae…

Martini artists (and it IS an art-form) can come to fisticuffs over the proper amount of vermouth, shaken vs. stirred martinis and the proper phase of the moon that influences the best martini.

The Martini is a cocktail made with gin and vermouth, and garnished with an olive or a lemon twist. Over the years, the Martini has become one of the best-known mixed alcoholic beverages. H. L. Mencken called the Martini “the only American invention as perfect as the sonnet” and E. B. White called it “the elixir of quietude”.

A dirty Martini contains a splash of olive brine or olive juice and is typically garnished with an olive, while a so-called ‘perfect Martini’ uses equal amounts of sweet and dry vermouth.

There are a number of variations on the traditional Martini. The fictional spy James Bond sometimes asked for his vodka Martinis to be “shaken, not stirred,” following Harry Craddock’s The Savoy Cocktail Book (1930), which prescribes shaking for all its Martini recipes. The proper name for a shaken Martini is a Bradford. However, Somerset Maugham is often quoted as saying that “a Martini should always be stirred, not shaken, so that the molecules lie sensuously on top of one another.”

One theory suggests the Martini evolved from a cocktail called the Martinez served sometime in the early 1860s at the Occidental Hotel in San Francisco, which people frequented before taking an evening ferry to the nearby town of Martinez. Another theory links the first dry martini to the name of a bartender who concocted the drink at the Knickerbocker Hotel in New York City in 1911 or 1912.

What follows is my eccentric and exacting recipe for the perfect, Citizens! You can buy a proper martini shaker here, by the way!

The Hirshon Undisputed Martini (ALWAYS with a capital ‘M’) is made with 2 ounces of Hendricks gin (I love its notes of cucumber, herbs and a hint of rose!) and 1 ounce of Bombay Sapphire gin per Martini – this provides the perfect blend of nose and flavor.

Of course, you should only use ice made from water which has been filtered using a reverse osmosis filtration process, which enables you to remove virtually all the chemicals and minerals from your probably heinous tap water. Or, just use ice made from distilled water or your favorite bottled water, if you’re so inclined.

The ingredients should then be placed in a chilled, two-part steel and glass shaker which has been stored in a freezer, and shaken 20 times with the right hand, while opening freezer and removing ice-cold Martini glasses with the left hand (the perfect martini glass should be paper-thin crystal, by the way).

Grab an atomizer you’ve pre-filled with 75% Noilly Pratt dry vermouth and 25 percent Cointreau. Hold the atomizer 4 inches above and 6 inches away from glasses. Use 3 atomizer blasts per martini glass.

Spear 3 (not one, not two – I said three) halves of pitted Castelvetrano olives (I believe these are the best martini olives around) with wooden toothpicks, one skewer per glass. These olives are large and by cutting them in half, they become “normal” size and infuse the Martini with their flavor.

Place one skewer each into frozen Martini glasses. Strain the gin into its icy Winter Palace (i.e. the chilled Martini Glass) and allow it to exchange pleasantries briefly with its rowdy, but aromatic associates – stir 12 times. Not 11. not 13. 12. Then sip slowly with good friends, soft lighting and listening to the best classic jazz in your music collection.

Do NOT follow this link or you will be banned from the site! Click here to see our Privacy Policies, Citizen!
1341shares
wpDiscuz
3
0
Would love your thoughts, please comment.x
()
x
| Reply