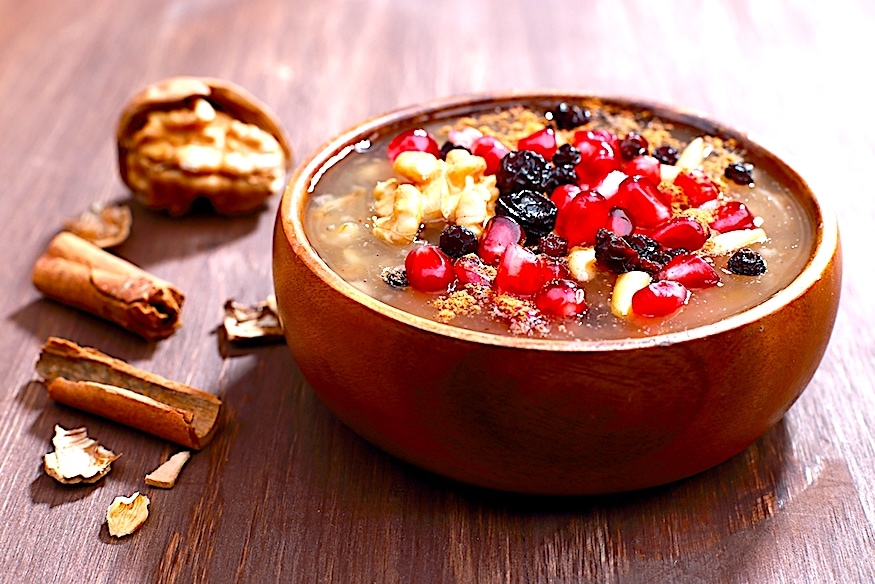 My Citizens, today allow me the great pleasure of introducing you to what has been called “the world’s oldest dessert”, supposedly what Noah and his family ate when they returned to dry land! Reflecting Islamic, Jewish, Christian and even pre-Islamic influences, there is a lesson to be learned here in these divisive times about living together in peace!

Ashure (Turkish: aşure; Bulgarian and Macedonian: ашуре; Greek: ασουρέ) or Noah’s Pudding is a Turkish dessert congee that is made of a mixture consisting of grains, fruits, dried fruits and nuts.

In Turkey it is made all the year and served especially during Muharram, the first month of the Islamic calendar, as the 10th of Muharrem corresponds to the Day of Ashure. (“Ashura” means “tenth” in Arabic.)

Aşure is part of the culinary tradition of Turkey as well as many of the surrounding countries like Greece; Christian and Jewish cultures as well as Muslims share similar versions of this dessert under a variety of names. Aşure is one of the limited set of Turkish desserts which contain no animal products. One reason behind it is arguably protesting all kinds of violence and bloodshed.

In anecdotal history, it is claimed that when Noah’s Ark came to rest on Mount Ararat, Noah’s family celebrated with a special dish. Since their supplies were nearly exhausted, what was left (primarily grains, dried fruits and the like) was cooked together to form a pudding, what is now known as Ashure.

Alevites in Turkey are the prominent group to promote this pudding, traditionally cooking and sharing it following the days of fasting (coinciding Battle of Karbala) in which they abstain from eating meat. In the Battle of Karbala, Hussein ibn Ali and his followers were murdered.

Traditionally, Ashure is made in large quantities to commemorate the ark’s landing and is distributed to friends, relatives, neighbors, colleagues, classmates, among others, without regard to the recipient’s religion or belief system as an offering of peace and love. Ashure was traditionally made and eaten during the colder months of the year as it is calorie-rich fare, but now it is enjoyed year-round.

The word Ashure come from Arabic word Ashura Arabic: عاشوراء‎ ʻĀshūrā’ . It means tenth. In Turkish tradition, this dish is made mostly on 10th of Muharram or after 10th of Muharram in Islamic Lunar Calendar. Not only Islamic believing, but also pre-islamic beliefs related with some Semitic stories also connected by Muharram month.

Also in Turkish, Ash(Aş) represents mixed porridge (or congee). It is derived from Persian word “Ashur” meaning mixing. Evliya Çelebi defines the Ashure in his travelbook, “Aşure is a porridge (aş) that should be cooked at the tenth of Muharram.”

The word ash is also used for other porridge. For example, “Sütlaç” (Sütlü Aş) is like rice pudding or milky rice porridge.

Ashure porridge does not have a single recipe, as recipes vary between regions and families. Traditionally, it is said to have at least seven ingredients. Some say at least ten ingredients in keeping with the theme of “tenth”, while Alevis always use twelve. Among these are wheat, rice, beans, chick peas, sugar (or other sweetener), dried fruits, and nuts, though there are many variants.

However, many renditions add orange and lemon peel to add depth to the pudding. Condiments such as sesame seeds, pomegranate kernels, and rose water, as well as cinnamon are placed on top before serving. There are renditions of ashure containing lentils as well. In most cases, it is vegan, and it is one of the well-known and the most popular vegan desserts in Turkish cuisine.

The Day of Ashure is an important day in the Muslim year, corresponding to the Mosaic Yom Kippur observed by Jews, and is observed by Muslims world over in honor of the prophet Moses.

The Tenth of Muharrem Day of Ashura also marks the end of the Battle of Karbala and is a special day of observance in Shia Islam. Among Turkish and Balkan Sufis (especially Bektashi), the ashure pudding is prepared with special prayers for health, healing, safety, success and spiritual nourishment.

Ashure represents many cultures’ beliefs, Islamic and pre-Islamic alike, and therefore is celebrated to commemorate many spiritual events believed to have happened on this day; for example, it is believed that:

Citizens, I hope you will try this ancient dessert and share it with those who do not follow your faith – the odds are very high that you will make some new friends and find out you have more in common than you may have ever realized!