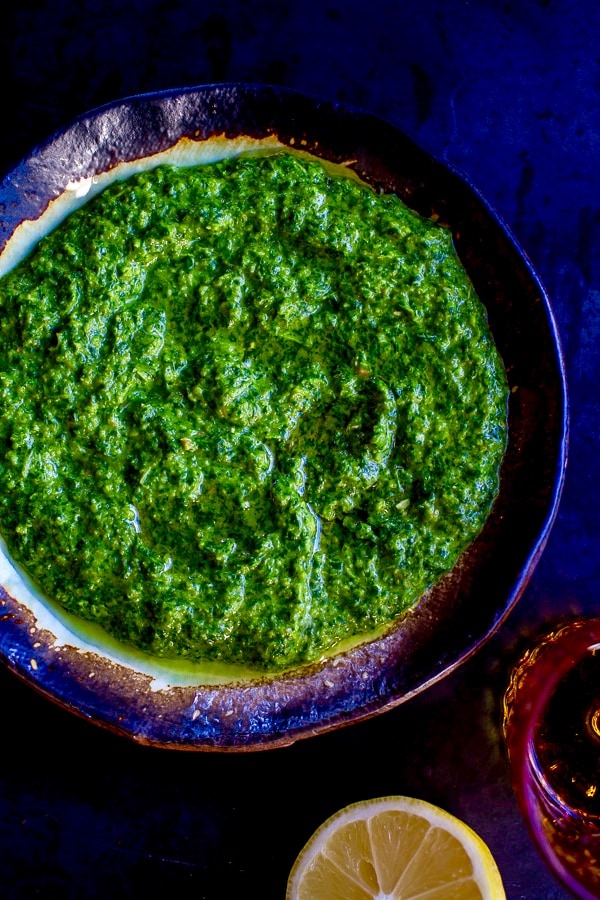 Citizens, one of the first recipes ever posted here on TFD was for the classic Tunisian spicy red condiment known as Harissa (recipe here).

There is, however, another much rarer variant of this spicy delight that is spring green from its use of a multitudinous number of herbs. This is closer to a Yemenite Zhoug or an Argentine Chimichurri in looks and flavor profile, but still bears the unmistakable stamp of North African cuisine!

Tunisia is one of the most fascinating countries on Earth, and their admirable part in the Arab Spring uprising gives them a special place in my heart!

The majority of Tunisia’s population (around 98%) are Muslims while about 2% follow Christianity and Judaism or other religions. The bulk of Tunisians belong to the Maliki School of Sunni Islam and their mosques are easily recognizable by square minarets.

However, the Turks brought with them the teaching of the Hanafi School during the Ottoman rule, which still survives among the Turkish descended families today, and their mosques traditionally have octagonal minarets. Sunnis form the majority with non-denominational Muslims being the second largest group of Muslims, followed by Ibadite Amazighs (aka Berbers).

Tunisia has a sizable Christian community of around over 35,000 adherents, mainly Catholics (22,000) and to a lesser degree Protestants. Berber Christians continued to live in some Nefzaoua villages up until the early 15th century and the community of Tunisian Christians existed in the town of Tozeur up to the 18th century. International Religious Freedom Report for 2007 estimates thousands of Tunisian Muslims have converted to Christianity.

Judaism is the country’s third largest religion with 900 members. One-third of the Jewish population lives in and around the capital. The remainder lives on the island of Djerba with 39 synagogues where the Jewish community dates back 2,600 years, in Sfax, and in Hammam-Lif.

Djerba, an island in the Gulf of Gabès, is home to El Ghriba synagogue, which is one of the oldest synagogues in the world and the oldest uninterruptedly used. Many Jews consider it a pilgrimage site, with celebrations taking place there once every year due to its age and the legend that the synagogue was built using stones from Solomon’s temple. In fact, Tunisia along with Morocco has been said to be the Arab countries most accepting of their Jewish populations.

The constitution declares Islam as the official state religion and requires the President to be Muslim. Aside from the president, Tunisians enjoy a significant degree of religious freedom, a right enshrined and protected in its constitution, which guarantees the freedom of thoughts, beliefs and to practice one’s religion.

Try this delicious Tunisian harissa variant with fish, chicken or really any meat that needs a spicy kick at your next meal – this is an uncommon recipe even in Tunisia, and I hope you enjoy it as much as I do! All glory to TFD Nation and those wonderful tax-paying Citizens who have elected to become a Citizen Prime and helping to keep the lights on here! 🙂