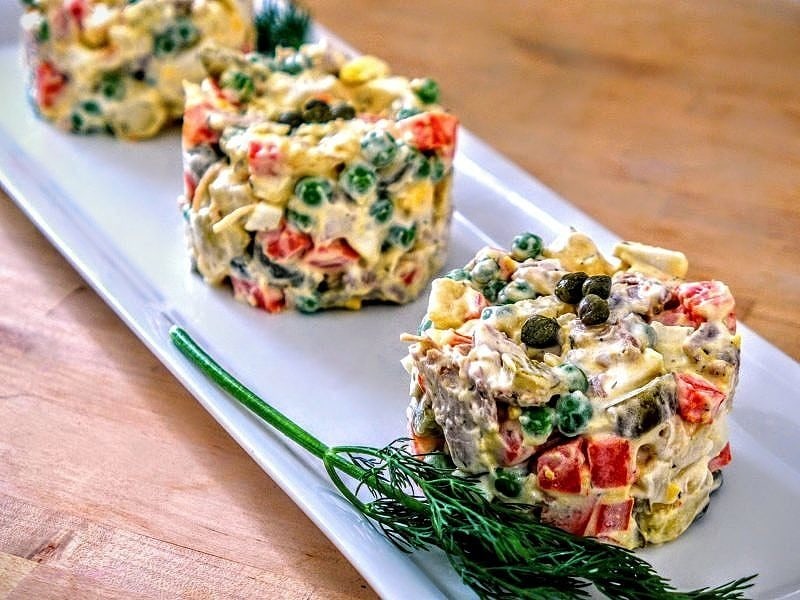 Citizens, Olivier salad is a traditional dish in Russian cuisine, which is also popular in many other European countries, Iran, Israel, Mongolia and also throughout Latin America.

In different modern recipes, it is usually made with diced boiled potatoes, carrots, brined dill pickles, green peas, eggs, celeriac, onions, diced boiled chicken (or sometimes ham or bologna sausage), sometimes tart apples, with salt, pepper, and mustard added to enhance flavor, and dressed with mayonnaise. In many countries, the dish is commonly referred to as Russian salad.

In Russia, Ukraine and other post-Soviet states, as well as in Russophone communities worldwide, the salad has become the centerpiece dish on zakuski (appetizer) tables served during New Year’s Eve (“Novy God”) celebrations.

The original version of the salad was invented in the 1860s by a cook of Belgian origin, Lucien Olivier, the chef of the Hermitage, one of Moscow’s most celebrated restaurants. Olivier’s salad quickly became immensely popular with Hermitage regulars, and became the restaurant’s signature dish.

The exact recipe — particularly that of the dressing — was a jealously guarded secret, but it is known that the salad contained grouse, veal tongue, caviar, lettuce, crayfish tails, capers, and smoked duck, although it is possible that the recipe was varied seasonally. The original Olivier dressing was a type of mayonnaise, made with French wine vinegar, mustard, and Provençal olive oil; its exact recipe, however, remains unknown.

At the turn of the 20th century, one of Olivier’s sous-chefs, Ivan Ivanov, attempted to steal the recipe. While preparing the dressing one evening in solitude, as was his custom, Olivier was suddenly called away on some emergency.

Taking advantage of the opportunity, Ivanov sneaked into Olivier’s private kitchen and observed his mise en place, which allowed him to make reasonable assumptions about the recipe of Olivier’s famed dressing.

Ivanov then left Olivier’s employ and went to work as a chef for Moskva, a somewhat inferior restaurant, where he began to serve a suspiciously similar salad under the name “capital salad” (Russian: столичный, tr. stolichny). It was reported by the gourmands of the time, however, that the dressing on the stolichny salad was of a lower quality than Olivier’s, meaning that it was “missing something.”

Later, Ivanov sold the recipe for the salad to various publishing houses, which further contributed to its popularization. Due to the closure of the Hermitage restaurant in 1905, and the Olivier family’s subsequent departure from Russia, the salad could now be referred to as “Olivier.”

One of the first printed recipes for Olivier salad, by Aleksandrova, appearing in 1894, called for half a hazel grouse, two potatoes, one small cucumber (or a large cornichon), 3-4 lettuce leaves, 3 large crayfish tails, ¼ cup cubed aspic, 1 teaspoon of capers, 3–5 olives, and 1 ½ tablespoons Provençal dressing (mayonnaise).

As often happens with gourmet recipes which become popular, the ingredients that were rare, expensive, seasonal, or difficult to prepare were gradually replaced with cheaper and more readily available foods.

The earliest published recipe known to date appeared in the Russian magazine Наша пища (Our Food) № 6 (31 March 1894). This magazine published from 1891 to 1896, editor M. Ignatiev, stated that the original recipe contained “mogul sauce” a.k.a. “kabul sauce” (along the lines of Worcestershire sauce), manufactured by John Burgess & Son (the brand he reputedly used) and Crosse & Blackwell. Some later recipes substituted soy sauce for the mogul sauce.

The book Руководство к изучению основ кулинарного искусства (Guide to the Fundamentals of Culinary Arts) (1897) by P. Aleksandrova gave a recipe containing grouse, crayfish, potatoes, cucumber, lettuce, aspic, capers, olives and mayonnaise. The author wrote that veal, partridge or chicken could be substituted but that the authentic recipe contained grouse.

In post-revolutionary Russia, cheaper ingredients were substituted for the originals: grouse was replaced by chicken or sausage, crayfish by hard-boiled egg, cucumbers, olives and capers by pickled cucumbers and green peas.

In modern usage, it is usually boiled diced vegetables bound in mayonnaise, with Doktorskaya-type sausage (a genericized Soviet bologna brand). The most common alternative version, where it is replaced with boiled or smoked chicken, is called Stolichny salad, after Ivanov’s version.

A multitude of other versions, named, unnamed, and even trademarked exist, but only Olivier and Stolichny salad have entered the common vernacular of post-Soviet states.

My “Tsarist” version is based on the early gourmet version of Olivier salad, prepared during the height of the Hermitage restaurant’s popularity with my own tweaks to meld the classic and the modern versions with unique TFD style! I would personally open a Russian mullti-course dinner with this recipe, followed by the classic Russian chicken pot pie known as kurnik!