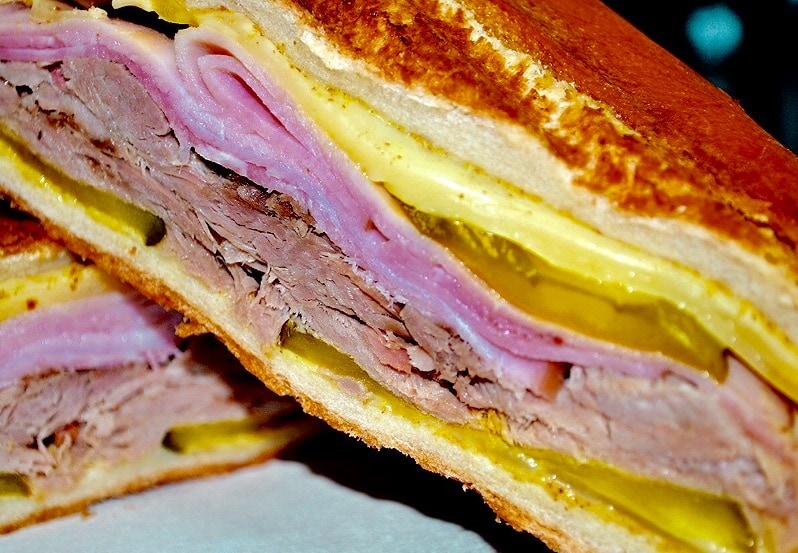 Citizens, we continue our 2-day culinary tour of North Florida today with a visit to the fine city of Tampa!

The deservedly famous Cuban sandwich is a variation of a ham and cheese sandwich that was often made in cafes catering to Cuban workers in the early Cuban immigrant communities of Florida: Key West and Ybor City, Tampa.

Later on, Cuban exiles and expatriates brought it to Miami, where it is also still very popular. The sandwich is made with ham, roasted pork, Swiss cheese, pickles, mustard, and (in Tampa ONLY) Genoa salami on Cuban bread.

The cigar industry in Florida shifted to Tampa in the 1880s and the sandwich quickly appeared in workers’ cafés in Ybor City and (later) West Tampa, leading historians to theorize that the sandwich as now constituted first appeared there.

By the 1960s, Cuban sandwiches were also common on Miami cafeteria and restaurant menus, as the city had gained a large influx of Cuban residents after Fidel Castro’s 1959 rise to power in their native land.

The rivalry between Tampa and Miami over the Cubano is legendary, Citizens!

In April 2012, the “Historic Tampa Cuban Sandwich” was designated as the “signature sandwich of the city of Tampa” by the city council. The gauntlet was thrown down to Miami publicly and in an NPR story about the conflict, a Tampa resident noted:

“…But in Tampa, Cubans quickly mixed with others – like Italians. Their Genoa salami is an ingredient that’s missing in the Miami version of the sandwich. Miami’s mayor might say, oddly, that salami belongs on pizza – but its salty greasiness is the perfect foil for mustard, pickle and Swiss cheese. Tampa’s Cubans married those Italians, Spaniards and others and formed a pan-Latin community – and a pan-Latin sandwich.”

TFD believes that mayonnaise, lettuce and tomato are abominations on a Tampa Cubano and hopes to impress this canon amongst the loyal Citizens of TFD nation!

Since the Cuban bread is nearly impossible to find outside of Florida and Cuban communities, I’ve taken the liberty of cribbing a recipe for it from the fine folks at King Arthur Flour!

This is the Mojo marinade for the Roast Pork from the John Favreau movie “Chef”. The recipe was created by rock star LA chef Roy Choi and works very well indeed in my version of the sandwich classic! See the preceding recipe for north Florida Minorcan clam chowder and consider serving it with this sandwich to any homesick Floridian from that part of the state!

Do NOT follow this link or you will be banned from the site! Click here to see our Privacy Policies, Citizen!
451shares
wpDiscuz
0
0
Would love your thoughts, please comment.x
()
x
| Reply