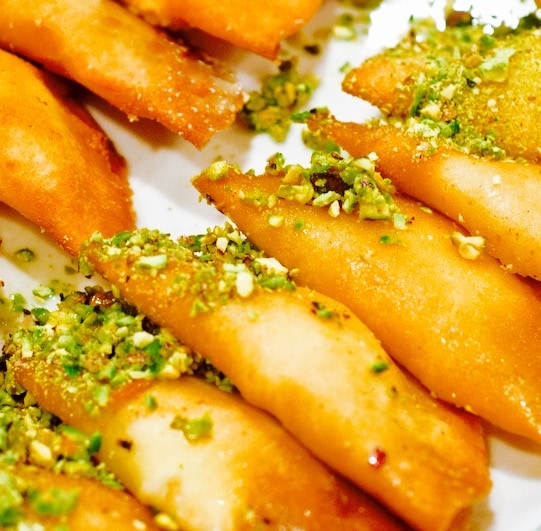 Citizens, ‘ataiyef are a delectable Syrian dessert enjoyed throughout the Arab world but which are closely associated with the Jews of the ancient Syrian city of Aleppo. TFD grew up in a Brooklyn neighborhood mostly made up of Syrian Jews, so this recipe is indeed one that is close-to-home.

‘Ataiyef are a dessert filled with ricotta cheese, deep-fried, and then dipped in chopped pistachio nuts and topped with shira (Fragrant Aleppian Dessert Syrup). Basically a Sephardic Jewish blintz, Aleppian Jews ate ‘ataiyef on happy occasions such as engagement parties.

Made with a thin pancake batter, they are cooked off as small, crepe-thin circles, but only on one side. Then they are filled with ricotta cheese, sealed and deep-fried. Then you drench them in rosewater-scented simple syrup, and dip the end in finely chopped pistachios.

What’s not to love?!

‘Ataiyef pancakes are one of the dairy foods customarily eaten during Shavuot (the Jewish festival of the giving of the Torah), which happens to be today! Also, the shira syrup is made with rosewater, which has a strong Shavuot connection.

For Sephardi communities, the holiday is known as the Festival of Roses, and the synagogue is decorated with flowers, just as Mount Sinai was full of flowers at the time of the revelation.

King Solomon’s “Song of Songs,” particularly the words “honey and milk are under your tongue,” inspired thi dish. The sweetness of shira shares a symbolic connection with the sweetness of Torah, which the Jews received on Shavuot.

Let us also learn of the Syrian Jews and the importance they have played in modern bible study.

Syrian Jews derive their origin from two groups: from the Jews who inhabited the region of today’s Syria from ancient times (known as Musta’arabi Jews, and sometimes classified as Mizrahi Jews, a generic term for the Jews with an extended history in the Middle East or North Africa); and from the Sephardi Jews (referring to Jews with an extended history in the Iberian Peninsula, i.e. Spain and Portugal) who fled to Syria after the Alhambra Decree forced the expulsion of the Jews from Spain in 1492.

In the first half of the 20th century a large percentage of Syrian Jews immigrated to the U.S., Latin America and Israel. Most of the remaining Jews left in the 28 years following 1973, due in part to the efforts of Judy Feld Carr, who claims to have helped some 3,228 Jews emigrate; emigration was officially allowed in 1992.

The largest Syrian Jewish community is located in Brooklyn, New York and is estimated at 75,000 strong. There are smaller communities elsewhere in the United States and in Latin America.

The greatest legacy of the Aleppo Jews was undoubtedly the Aleppo Codex, the oldest and most famous manuscript of the Bible. 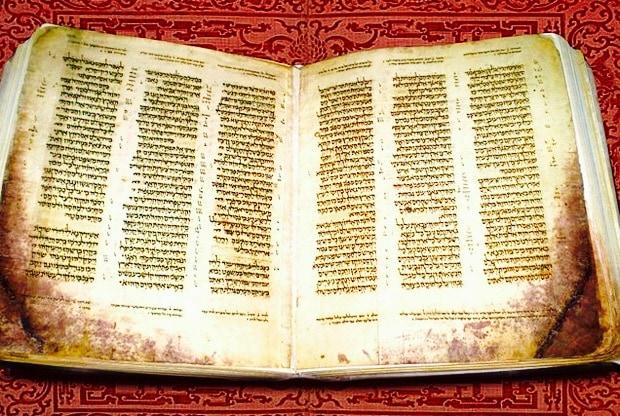 Written in Tiberias in the year 920, and annotated by Aaron ben Asher, it has become the most authoritative Biblical text in Jewish culture.

For the next five centuries, it was kept closely guarded in the basement of the Central Synagogue of Aleppo, and was considered the community’s greatest treasure.

Scholars from around the world would consult it to check the accuracy of their Torah scrolls. In the modern era the community would occasionally allow academics, such as Umberto Cassuto, access to the Codex, but would not permit it to be reproduced photographically or otherwise.

The Codex remained in the keeping of the Aleppo Jewish community until the anti-Jewish riots of December 1947, during which the ancient synagogue where it was kept was broken into and burned. The Codex itself disappeared.

In 1958, the Keter was smuggled into Israel by Murad Faham and his wife Sarina, and presented to the President of the State, Yitzhak Ben-Zvi.

Sadly, as of November 2015, only 18 Jews were left in Syria and the community may in fact be totally gone now due to the Syrian civil war.

Citizens, my version of this delectable dessert is resolutely traditional with one small modification. I add some clarified butter to the deep-fry oil as it both improves the flavor and adds another level of dairy context to this Shavuot dessert.