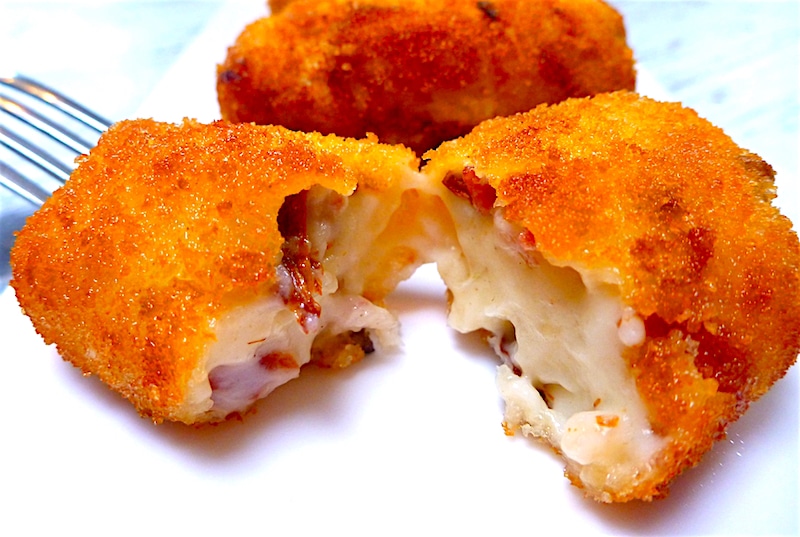 Citizens, Spanish ham croquettes are one of the most common items to be found at Tapas bars throughout the country – and these are easily amongst the most delicious!

Most croquettes use the already excellent Spanish Serrano ham – I kick it up a notch by using the ultimate ham, the mighty jamón ibérico! Allow your all-knowing Generalissimo to bring you up to speed on this legendary ham, considered the finest in the world!

Jamón ibérico (“Iberian ham”, also called pata negra; “black hoof”) is a type of cured ham produced in Spain. According to Spain’s Denominación de Origen rules on food products, jamón ibérico may be made from black Iberian pigs, or cross-bred pigs as long as they are at least 50% ibérico.

Immediately after weaning, the piglets are fattened on barley and maize for several weeks. The pigs are then allowed to roam in pasture and oak groves to feed naturally on grass, herbs, acorns, and roots, until the slaughtering time approaches.

At that point, the diet may be strictly limited to olives or acorns for the best quality jamón ibérico, or may be a mix of acorns and commercial feed for lesser qualities.

The hams from the slaughtered pigs are salted and left to begin drying for two weeks, after which they are rinsed and left to dry for another four to six weeks. The curing process then takes at least twelve months, although some producers cure their jamones ibéricos for up to 48 months.

Jamones de bellota are prized both for their smooth texture and rich, savory taste. A good ibérico ham has regular flecks of intramuscular fat (marbling). The fat content is relatively high compared to jamón serrano, thus giving a rich taste.

Until 2007, jamón ibérico was not available in the United States (a fact referenced in the movie Perdita Durango, where the ham of Jabugo is praised as “illegal, but delicious”).

In particular, the ibérico hams from the towns of Guijuelo in the Salamanca province and Jabugo in the Huelva province have their own Denominación de Origen. Almost the entire town of Jabugo is devoted to the production of jamón ibérico; the biggest producer is 5J Sánchez Romero Carvajal. The town’s main square is called La plaza del Jamón.

The hams are labeled according to the pigs’ diet and the percentage of the pigs’ Iberian ancestry, with an acorn diet and pure-bred Iberians being most desirable. The current labeling system, based on a series of color-coded labels, was phased in starting in January 2014.

The finest is called jamón ibérico de bellota (acorn). This ham is from free-range pigs that roam oak forests (called dehesas) along the border between Spain and Portugal, and eat only acorns during this last period. It is also known as jamón ibérico de Montanera. The exercise and diet have a significant impact on the flavor of the meat; the ham is cured for 36 months.

This grade is divided into two subtypes:

Red label — Identifies jamón ibérico de bellota from free-range pigs that are not pure-bred, but also fed exclusively on acorns during the final period. Since 2014, the percentage of Iberian ancestry in the animal must be specified on the label.

The next grade is called jamón ibérico cebo de campo. This ham is from pigs that are pastured and fed a combination of acorns and grain. As of 2014, this ham bears a green label.

The third type is called jamón ibérico de cebo, or simply, jamón ibérico. This ham is from pigs that are fed only grain. The ham is cured for 24 months. As of 2014, this ham bears a white label.

Additionally, the word puro (pure, referring to the breed) can be added to the previous qualities when both the father and mother of the slaughtered animal are of pure breed and duly registered on the pedigree books held by official breeders.

Also, images of acorns and dehesas on product labels are restricted to hams that qualify as bellota. The current labeling system also applies to paleta (front legs, with jamón coming from the hind leg) and caña de lomo (loin) cuts from Iberian pigs.

The term pata negra is also used to refer to jamón ibérico in general, and may refer to any one of the above three types. The term refers to the color of the pigs’ nails, which are white in most traditional pork (Sus domesticus) breeds, but black for the Black Iberian breed. While as a general rule, a black nail should indicate an Ibérico ham, there are cases of counterfeits, with the nails being manually painted.

Citizens – these will be the finest ham croquettes you have ever experienced, of this TFD has every confidence! ☺