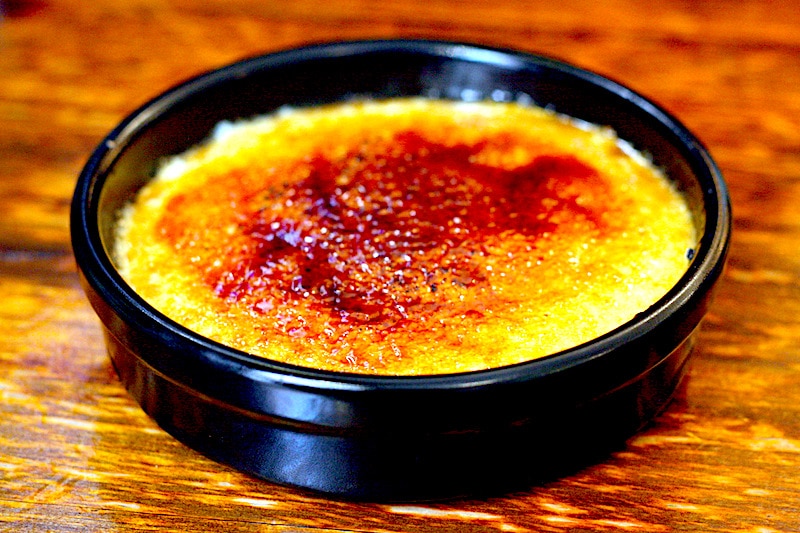 Citizens, today I give you the gutsier, Spanish version of Crème brûlée!

In Catalan cuisine, crema catalana (“Catalan cream”) or crema quemada (“Burnt cream”), is a dish similar to crème brûlée, although the sugar (caramelized with a specially made iron, rather than a flame) is a recent innovation.

Traditionally known as crema de Sant Josep, it was originally served on Saint Joseph’s Day although nowadays it is consumed at all times of the year. The custard is flavored with lemon or orange zest, and cinnamon.

I prefer the more subtle Ceylon cinnamon or Cassia and Meyer lemon for my version of the recipe. 🙂

Heat in a saucepan the milk and cream with the orange and lemon peels along with the cinnamon stick and vanilla bean.

Remove the pan from the heat before it starts to boil.

While the milk and cream are slowly heating, beat the egg yolks with the superfine sugar, until the mixture turns pale yellow.

Beat in the dissolved cornstarch and a spoonful of the hot milk and the almond milk.

Over medium heat, place a pan with water that will make a water bath.

Strain the milk and cream mixture and discard spices. Slowly incorporate into the yolk mixture, stirring constantly with a whisk.

Placing the milk mixture bowl into the water bath, continue stirring continuously until a consistent cream is formed.

To cool it, continue beating in an ice-cold water bath in a separate bowl.

Place the mixture in individual bowls or ramekins and let cool completely in the refrigerator.

Before serving, sprinkle the white and brown sugars evenly over the cream and caramelize with a small blowtorch. Do this slowly, being careful not to burn sugar and form a candy crust. This candy, breaking and mix with the cream, gives a special touch to the final product.