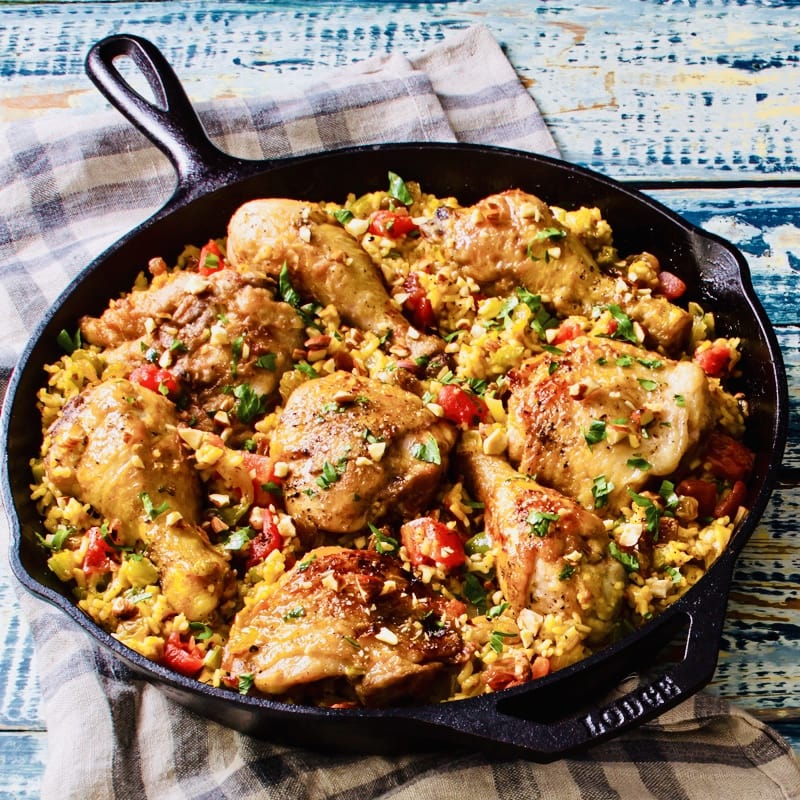 Citizens, behold a recipe from the swirling mists of Britain, India (and America’s) past! 🙂

Country Captain is a curried chicken and rice dish, which remains very popular in the Southern United States. It was introduced to the U.S. through Charleston, Savannah, New York and Philadelphia, but has origins in India. The dish was once included in the United States military Meal, Ready-to-Eat packs, in honor of it being a favorite dish of George S. Patton! Chef Cyrus Todiwala served his version of this recipe to Queen Elizabeth II as part of her Diamond Jubilee celebrations.

In its basic form, country captain is a mild stew made with browned chicken pieces, onions, and curry powder. Almonds and golden raisins or zante currants are usually added. Many versions also call for tomatoes, garlic, and bell peppers. The dish is served over white rice. With the exception of the rice, it is meant to be cooked all in the same pot. Chef Mamrej Khan has referred to the dish as one of the first fusion dishes to be developed, making it part of the Anglo-Indian cuisine.

Country captain originated in India as a simple spatchcock poultry or game recipe involving onions and curry and possibly enjoyed by British officers. One theory is that an early 19th-century British sea captain, possibly from the East India Company, working in the spice trade introduced it to the American South via the port of Savannah.

The dish remains popular amongst the communities in Mumbai, India. The “country” part of the dish’s name dates from when the term referred to things of Indian origin instead of British, and so the term “country captain” would have meant a captain of Indian origin, a trader along the coasts of India. Others claim that the word “captain” in the title is simply a corruption of the word “capon”.

In 1991, New York Times columnist Molly O’Neill researched the origin of the dish known as country captain, which had been a steady feature in southern cookbooks since the 1950s. Working with Cecily Brownstone, they discovered that the dish originally published in the United States in the pages of Miss Leslie’s New Cookery Book published in Philadelphia in 1857. The recipe required a “fine full-grown fowl”. It also appeared in the kitchens of Alessandro Filippini, who was a famous chef with a restaurant on Wall Street in the 19th century.

Citizens, this dish is still enjoyed today throughout the genteel city of Charleston, South Carolina (as well as most of the American South) and my version is especially savory, if I do say so myself. My tweaks to the original recipe are noted and I hope you will enjoy its savory, mildly spicy goodness!