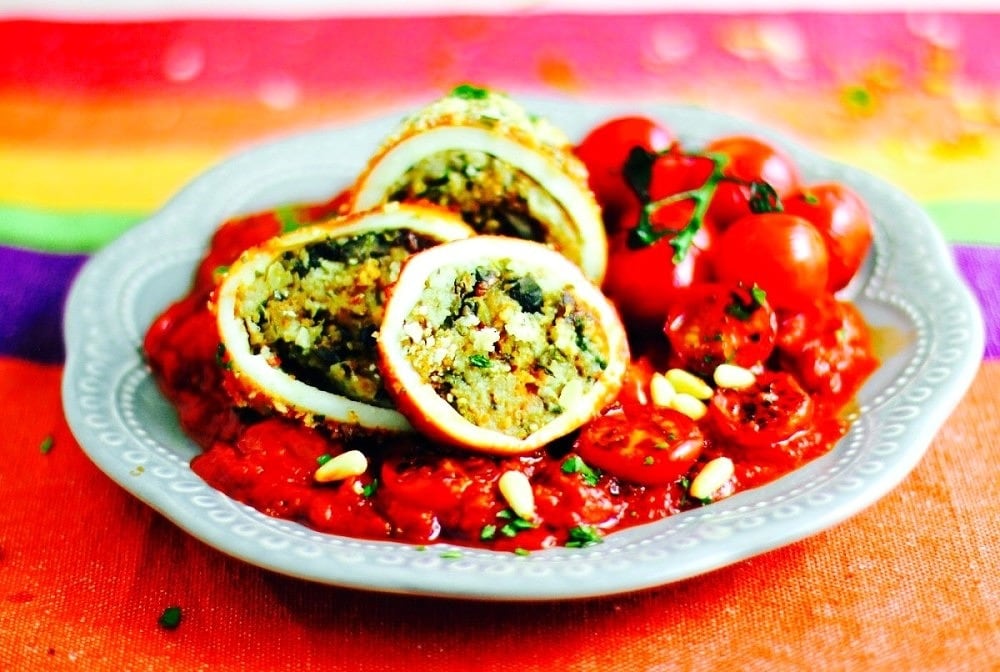 Citizens, we have finally reached the idyllic and gorgeous shores of Sicily, home to some of the finest recipes in all of the Italian region! 🙂

Sicily is the largest island in the Mediterranean Sea. It constitutes an autonomous Region of Italy, along with surrounding minor islands, officially referred to as Regione Siciliana (in Italian, Sicilian Region).

Sicily is located in the central Mediterranean Sea, south of the Italian Peninsula, from which it is separated by the narrow Strait of Messina. Its most prominent landmark is Mount Etna, the tallest active volcano in Europe, currently 3,329 m (10,922 ft) high, and one of the most active in the world. The island has a typical Mediterranean climate.

The earliest archaeological evidence of human activity on the island dates from as early as 12,000 BC. By around 750 BC, Sicily had three Phoenician and a dozen Greek colonies and, for the next 600 years, it was the site of the Sicilian Wars and the Punic Wars, which ended with the Roman Republic’s destruction of Carthage at the battle of Carthage (c. 149 BC).

Sicily frequently changed hands after the fall of the Roman Empire in the 5th century AD, and it was ruled during the early Middle Ages by the Vandals, Ostrogoths, Byzantine Empire, and the Emirate of Sicily.

It became part of Italy in 1860 following the Expedition of the Thousand, a revolt led by Giuseppe Garibaldi during the Italian unification, and a plebiscite. Sicily was given special status as an autonomous region after the Italian constitutional referendum of 1946.

Sicily has a rich and unique culture, especially with regard to the arts, music, literature, cuisine, and architecture. It is also home to important archaeological and ancient sites, such as the Necropolis of Pantalica, the Valley of the Temples, and Selinunte.

Today in Sicily most people are bilingual and speak both Italian and Sicilian, a distinct and historical Romance language. Some of the Sicilian words are loan words from Greek, Catalan, French, Arabic, Spanish and other languages.

The island has a long history of producing a variety of noted cuisines and wines, to the extent that Sicily is sometimes nicknamed God’s Kitchen because of this.

Every part of Sicily has its speciality (for example Cassata is typical of Palermo, even if available everywhere in Sicily, as is Granita, a Catania speciality). The ingredients are typically rich in taste while remaining affordable to the general public.

The savory dishes of Sicily are viewed to be healthy, using fresh vegetables and fruits, such as tomatoes, artichokes, olives (including olive oil), citrus, apricots, aubergines, onions, beans, raisins commonly coupled with seafood, freshly caught from the surrounding coastlines, including tuna, sea bream, sea bass, cuttlefish, swordfish, sardines, and others.

Perhaps the most well-known part of Sicilian cuisine are the rich sweet dishes including ice creams and pastries. Cannoli (singular: cannolo), a tube-shaped shell of fried pastry dough filled with a sweet filling usually containing ricotta cheese, is in particular strongly associated with Sicily worldwide.

Citizens, this dish is very typically Sicilian especially through its use of golden raisins in the stuffed squid, as well as fennel, capers, lemon and pecorino romano cheese. You will find this a delicious introduction to the joys of Sicilian cuisine!

Deglaze with Marsala, and allow alcohol to alight, continuing to shake pan until flame subsides and alcohol is burned off. Remove mixture to food processor.

Begin stuffing the calamari tubes by piping a small amount of stuffing through a pastry bag or hand-stuffing into the tube. Be sure not to over-stuff the tubes, or they may burst during cooking. There should be no stuffing at either ends of the tube, only in the middle. Once stuffed, use toothpicks to close tubes.

To cook calamari, heat a large skillet with oil over high heat, and once smoking, add calamari tubes to pan and sear. When they’ve begun to brown, flip and brown other side. Transfer seared tubes to a pot of simmering tomato sauce, and cook for at least another 30 minutes. In the last 15 minutes, add basil.

To serve, remove calamari from sauce, remove toothpicks and spoon some tomato sauce over the top. Garnish with fresh grated Romano and chopped parsley.