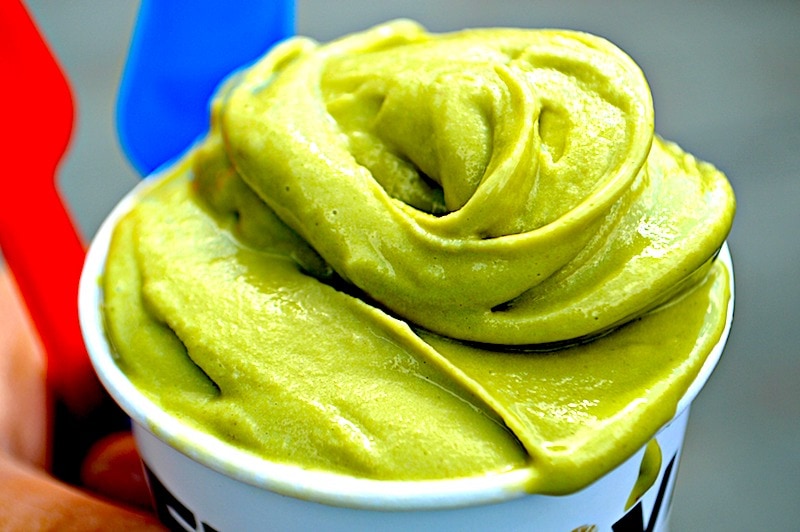 Citizens, today is the Jewish holiday of Shavuot (a detailed explanation of the holiday is here), which is traditionally celebrated by eating any number of dairy meals throughout the day and evening. I, the incomparable and felicitous leader of TFD Nation, have decided to share with you my recipe for super-creamy pistachio gelato in the spirit of the holiday!

Should you instead wish to celebrate with a more classic Jewish dairy dessert, please do try my recipe for the best cheese blintzes you’ll ever experience!

…and for the record: YES, there just so happens to be a very large Italian Jewish community, mostly centered in Rome.

Gelato, from the Italian word gelato meaning “frozen”, is an English term for ice cream made in an Italian style.

Gelato is made with a base of milk, cream, and sugar, and flavored with fruit and nut purees and other flavourings. It is generally lower in fat, but higher in sugar, than other styles of ice cream. Gelato typically contains less air and more flavoring than other kinds of frozen desserts, giving it a density and richness that distinguishes it from other ice creams.

The history of gelato is rife with myths and very little evidence to substantiate them. Some say it dates back to frozen desserts in Sicily, ancient Rome and Egypt made from snow and ice brought down from mountaintops and preserved below ground. Later, in 1686 the Italian fisherman from the island of Sicily Francesco Procopio dei Coltelli perfected the first ice cream machine.

However, the popularity of gelato among larger shares of the population only increased in the 1920s–1930s in the northern Italian city of Varese, where the first gelato cart was developed. Italy is the only country where the market share of artisanal gelato versus mass-produced gelato is over 55%. Today, more than 5,000 modern Italian ice cream parlors employ over 15,000 people.

Pistachio gelato is the most counterfeited flavour of all the gelati.

The reason for this is purely financial. The cost of the nut itself is about 3 to 4 times that of most other nuts.

The first type is made with Pistachio, Almonds & Chlorophyll (green colouring). These pastes generally cost around $25 per Kilo and is used by about 85% of all gelato retailers around the world, including Italy! It is by far and away the most common paste and the flavour this paste gives the gelato is basically what the world has unfortunately come to associate with “pistachio gelato“.

The second type is a pure pistachio paste, usually made with pistachio from Iran. These are lightly roasted (more for dehydrating the nut, rather than actually generating a roasted flavour) and then ground to a paste. It accounts for about 10% of the market and costs between $50-$60 per kilo. It yields a good quality gelato, but visually lacks the vibrant green colour you would get with the first type of paste discussed above.

The third variety is basically the same as the second type, but the pistachio’s come from Sicily, Italy. This variety is by far the most expensive. It accounts for about 5% of the market and costs between $60-$80 per kilo. To be even more specific some gelato producers claim to use a Sicilian pistachio from a specific region called Bronte, a town at the foot of mount Etna rich in volcanic soils. For this you’re paying around $90 per kilo and this is what is generally accepted as the best pistachio nut in the world. Many claim that they use this pistachio paste, quite fraudulently! Its basically the paste that everyone ‘says’ they use when doing media interviews or marketing their product. Most of the time they don’t and its complete fib!

Of course, The Food Dictator refuses to compromise and uses only the genuine Bronte product – it is expensive but worth every penny! You can purchase it here.

Citizens, my recipe for Pistachio gelato is closely based on one from the incomparable David Leibovitz. As he notes:

I love pistachio gelato and finally I can present a top-notch recipe. I opted to make it truly Sicilian-style, enriching the base with cornstarch, which is common for gelato in southern Italy. I included a recipe for Fleur de Lait ice cream in The Perfect Scoop with a cornstarch base and Mark Bittman subsequently wrote one up as well. It’s simple to make, but the main advantage is that not using eggs means the flavor’s focused squarely on the pistachio with nothing to distract from those perfect scoops of it. Except your spoon.

This may not be an “authentic” Shavuot recipe, but it fits perfectly into the theme of the holiday and may in fact be enjoyed at any time during the year!