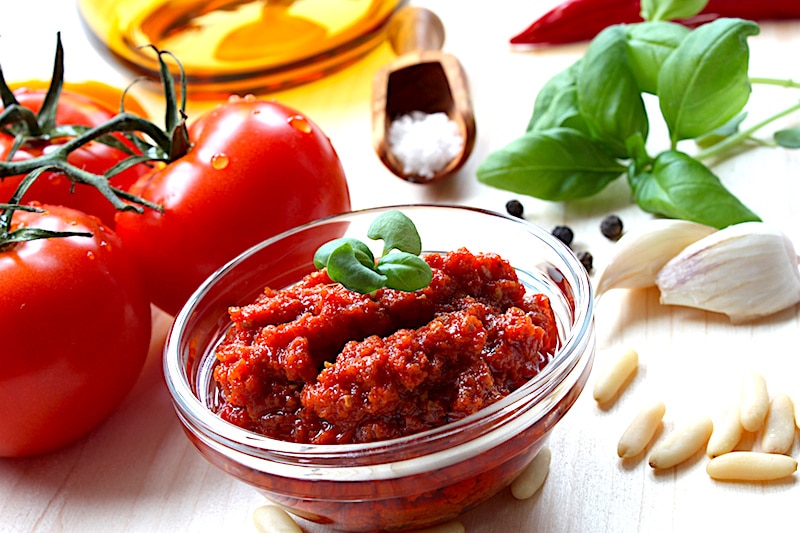 Citizens, the magnificent island of Sicily is home to one of the great cuisines of the world, influenced by Italy, North Africa and even the Middle East plus it own unique ingredients and techniques! A great example of what I am talking about may be found in the following recipe.

This recipe, called Pesto Trapanese, originates from the Italian city of Trapani, on Sicily’s westernmost tip. Geographically, Trapani is closer to the country of Tunisia so its local food has been defined by both Italian and Tunisian ingredients.

As a result, this pesto bears no resemblance to the popular Italian basil pesto with which we’re familiar from northern Italy. Instead, it is a savory-sweet combination of tomatoes, raisins, and almonds with the addition of anchovies and capers.

Pesto alla trapanese, also known as pesto alla siciliana, pesto rosso and “pasta cull’agghia” in Sicilian) is thus a Sicilian variation of the genoese pesto, typical of the Province of Trapani.

The dish was introduced to Sicily in ancient times by Genoese ships, coming from the East and stopping at the port of Trapani, who brought the tradition of agliata, a sort of pesto-sauce based on garlic and walnuts, which was then developed by Trapani sailors with the products of their land, notably tomato and almonds.

It is listed as a traditional Italian food product (P.A.T.) by the Ministry of Agricultural, Food and Forestry Policies.

This sauce has a full-bodied texture and a strong character due to the presence of important ingredients, which are crushed in a marble mortar: the fine and rare red garlic from Nubia , a Slow Food Presidium, cultivated in the homonymous municipality of the Paceco (Trapani) and harvested between May and June, very intense aroma; the Sicilian pecorino DOP, from the semi-hard cheese and strong flavor; the famous Noto almonds, pleasantly bitter; the DOP extra virgin olive oil of Trapanesi Valli, fruity and slightly spicy. To refine everything we use datterini tomatoes, small and sweet, and basil,  for a touch of freshness.

I have adapted the recipe by adding in a touch of sun-dried tomatoes, to pay homage to the dried tomatoes used by the sailors who created the original recipe and to add even more concentrated tomato flavor. I’ve adapted the ingredient proportions to my own tastes and I hope you will find favor with the flavor thus created!