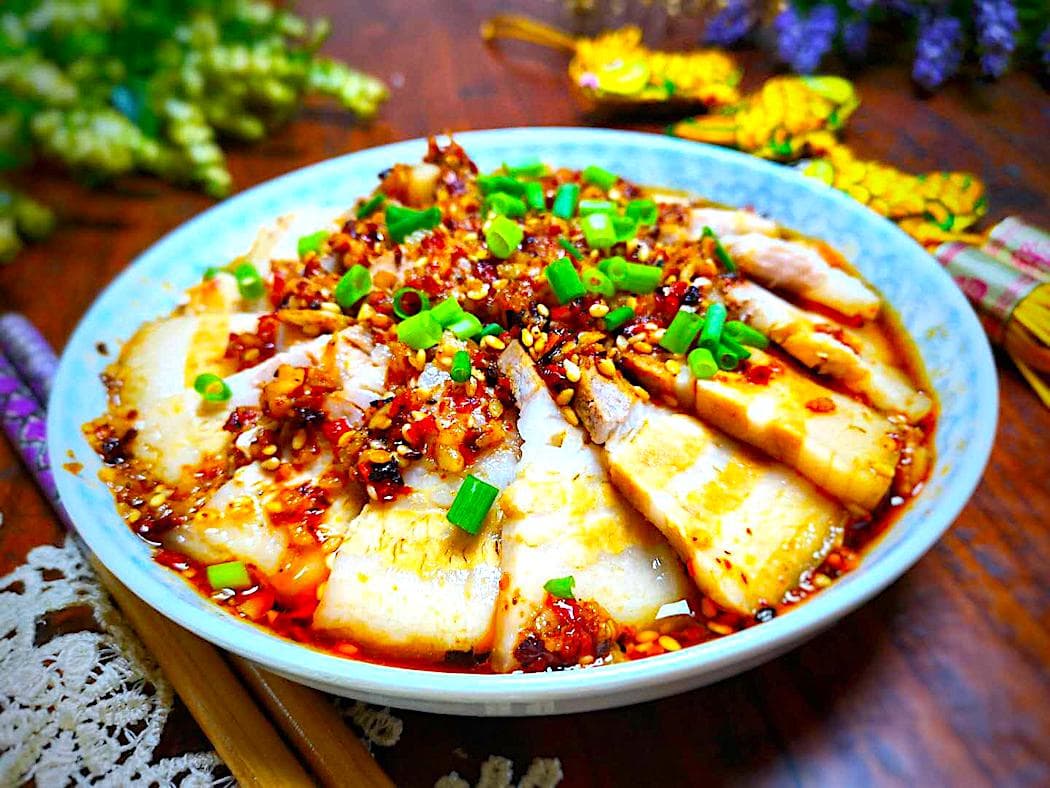 Citizens, this is one of my favorite Sichuan dishes! Suan ni bai rou (蒜泥白肉) is simply thin slices of cooked pork belly (aka uncured bacon), served cold, and marinated with a delectable soy-chili-garlic sauce. The direct translation is simple: garlic white pork.

Sichuan cuisine, Szechwan cuisine or Szechuan cuisine (/ˈsɛʃwɒn/ or /ˈsɛtʃwɒn/), is a style of Chinese cuisine originating from Sichuan Province. It has bold flavours, particularly the pungency and spiciness resulting from liberal use of garlic and chili peppers, as well as the unique flavour of Sichuan pepper.

UNESCO declared Chengdu, the capital of Sichuan Province, to be a city of gastronomy in 2011 to recognize the sophistication of its cooking.

Sichuan in the Middle Ages welcomed Middle Eastern crops, such as broad beans, sesame and walnuts. Since the 16th century, the list of major crops in Sichuan has even been lengthened by New World newcomers.

The characteristic chili pepper came from Mexico, but probably overland from India or by river from Macau, complementing the traditional Sichuan peppercorn (花椒; huājiāo).

The population of Sichuan was cut by perhaps three quarters in the wars from the Ming dynasty to the Qing dynasty. Settlers from the adjacent Hunan Province brought their cooking styles with them.

Pork became a most favored meat in the region, as was true in most non-Muslim parts of China. Pork belly is especially popular amongst the Sichuanese.

Sichuan is colloquially known as the “heavenly country” due to its abundance of food and natural resources. One ancient Chinese account declared that the “people of Sichuan uphold good flavour, and they are fond of hot and spicy taste.”

Most Sichuan dishes are spicy, although a typical meal includes non-spicy dishes to cool the palate.

My version of this classic Sichuanese pork dish is very traditional and is also easy to make – try it for a spicy appetizer or palate-cleansing course in a multi-stage Chinese feast! The classic Chinese ‘Man-Han’ feast can still be experienced in China today, as noted here.