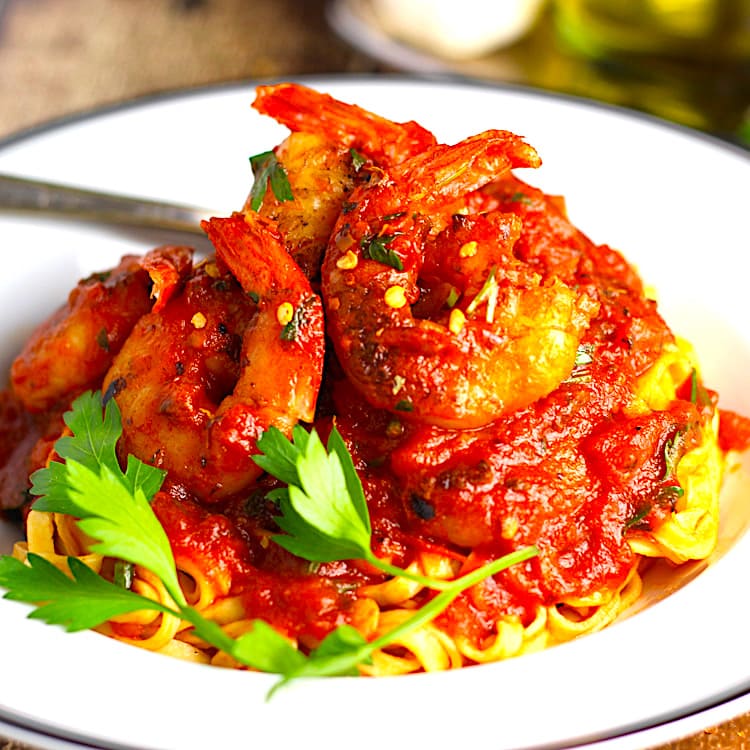 My Citizens, this spicy Italian-American classic recipe is a personal favorite of TFD! Fra Diavolo (Italian for “Devil monk”) is the name given to a spicy sauce for pasta or seafood. Most versions are tomato-based and use chili peppers for spice, but the term is also used for sauces that include no tomato, or that use cayenne or other forms of pepper.

An article in the New York Times about Lobster Fra Diavolo talks about the slippery issue of provenance for this recipe:

…”Oh, dear,” sighed Anna Teresa Callen, the Italian-born cookbook author and cooking teacher, when asked about it. “It’s not an Italian dish. It’s really another Italian-American invention. I have never seen it in Italy, and I suspect that it came from Long Island.”

Like Mrs. Callen, many authorities on Italian cooking are not on the side of the devil.

Tony May, the owner of San Domenico, who is from Naples, said lobster fra diavolo was not from his hometown. “It’s like the lemon peel with the coffee, he continued. “I first heard of it when I came to New York in 1963. I think there was a restaurant in midtown called Fra Diavolo that started it. Or maybe the restaurant was Vesuvio.”

Giuliano Bugialli, another cookbook author and cooking teacher, said it was invented in New York. “We don’t even have American lobsters in Italy,” he added. “And a heavy tomato sauce with hot peppers, seafood and pasta all in one dish is not Italian cooking. I think it came from a restaurant that was near the old Met, around 38th Street and Broadway.”

Others trace its origins to Little Italy. Victor Hazan, the wine expert, said he remembered first eating lobster fra diavolo at the Grotta Azzurra restaurant in Little Italy in 1940. His wife, Marcella, the cookbook author and teacher, added: “You brought me to that restaurant. I remember the dish clearly because it was so heavy and typical of Italian cooking in America. We don’t eat like that in Italy.”

Nancy Verde Barr, the author of “We Called It Macaroni,” a book about Italian immigrant cooking, said she knew it was an American invention, probably from Little Italy in New York. “I did not include it in my book because it was restaurant food and never something we made at home,” she explained.

But the consensus is far from unanimous. There are those who vouch for the Italian authenticity of the rich, spicy dish.

Take Frank Scognamillo, an owner of Patsy’s in midtown. “My father told me it came from Naples,” he said. “The Calabresi and Neapolitans love hot sauces, and the recipes are all there. They have been handed down for generations.” Not in Tony May’s family, but never mind.

Mr. Scognamillo’s father, Pasquale, came to New York from Naples in 1923 and opened Patsy’s in 1944. Lobster fra diavolo is a favorite of Patsy’s regulars like Frank Sinatra, Carroll O’Connor and Neil Sedaka. “But Sinatra wants his with less garlic,” Mr. Scognamillo said.

John Mariani, the food writer, whose parents emigrated from Italy, said he found mentions of it in guides to New York restaurants written in the 1930’s, but he also remembered his mother’s preparing lobster fra diavolo for his father. “I asked her about it, and she said she learned of the dish from him when they were still living in Italy,” he noted. His father was from the Abruzzi region.

In the dim blue fluorescent light of the very Grotta Azzurra in Little Italy where Victor Hazan had his first taste of lobster fra diavolo, the dish is as heavy, garlicky and peppery as ever. And though it is not for the fastidious diner, it remains a satisfying dish. “My father told me my grandfather brought the dish from Naples,” said Connie Davino, an owner. “They had different lobsters in Naples, but they had a dish like that. We’ve been serving it as long as I can remember.” Or longer. The restaurant was founded in 1908.

Regardless of its origins, Citizens – I will now share my closely-guarded unmatched secret recipe for this magnificent creation!