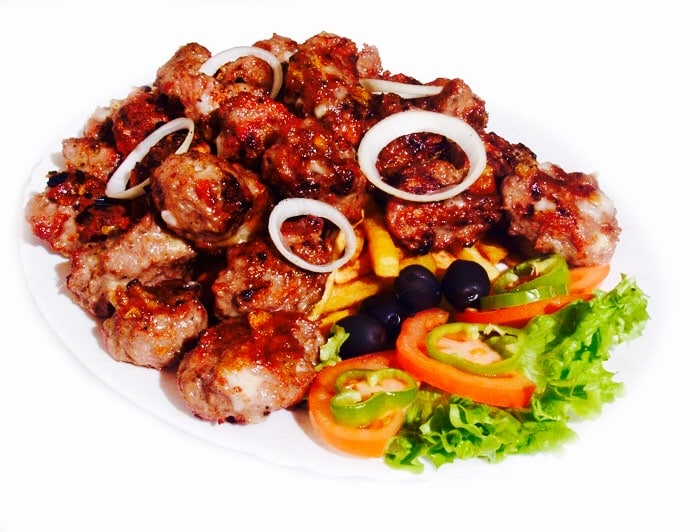 With many thanks to my dear friend Lazar Stojković for this detailed culinary and social background info!

This dish originated in Southeastern Serbia where people are traditionally very frugal. In fact, there are as many Serbian jokes about the thriftiness of people from Pirot (a town which somehow ended up being the poster child) as there are British jokes about the Scots.

Another thing Southeastern Serbia is famous for is its grill / BBQ (ser. “roštilj”) which is among the best in the entire Balkan Peninsula. The grillmasters of Leskovac (about 60 km from Pirot) pretty much rule supreme in that department. A few staple foods there are as follows:

Now, aside from the wonderful quality of the meats, the important thing here is also the quantity.

If you order just Mešano meso (eng. “Mixed meat”), you’ll get a little bit of everything mentioned above on a single plate. It’s quite manageable. However, if you order Leskovački voz (eng. “The train of Leskovac”), you’re in for a big surprise.

You’ll be getting a full portion (not just samplers!) of each of the aforementioned dishes on its own plate, arriving one by one so you can eat everything while it’s still warm. Not too many people can go through a “train car”!

Anyhow… being very economical (malicious people would say penny-pinching) grillmasters with strong distaste for throwing food away, people from Leskovac came up with an idea how to reuse uneaten Ražnjići (eng. “Small skewers”) that were not used in a meal.

The story goes that they would carefully remove the meat from the skewers and reuse it in Leskovački uštipci to avoid throwing it away and being forced to buy new meat for a new meal.

Interestingly, the name of the dish itself means “Uštipci of Leskovac”, which sounds to me a lot like a boast along the lines of “in your town, uštipci are made of yeast and flour, but ours are made of top-notch BBQ meat” (which had originally come from Ražnjići, but I guess that’s a part no one mentions).

Eventually, the dish grew so much in popularity that it “earned its right” not to be made from previously grilled “recycled” meat. 🙂

Once you and your guests realize these Leskovački are basically spicy bacon cheeseburgers in a single bite form, they will be devoured with ferocity, Citizens! I might counsel ending your Serbian meal with these delicious Serbian lamingtons as a sweet treat!