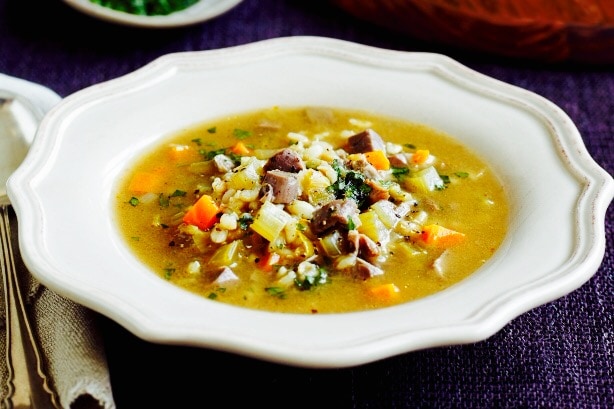 Citizens, in 1926 The Glasgow Herald said of Scotch broth that it is ‘”Baith meat and medicine!”….The barley, diuretic, soothing; leeks, sworn enemy of stone troubles…. Parsley is a wonderful blood purifier.’

This is a hefty broth, served often as a main meal, perhaps with some chunks of buttered bread. Traditionally it’s popular on New Year’s Day because of its restorative powers to the body, after the hedonistic punishment of the night before. It tastes even better reheated the next day.

Needless to say, the TFD version of this recipe specifies the only proper meat for Scotch Broth – lamb! Beef is common now, but lamb is where it’s truly at, Citizens!

What makes it Scottish? Probably the fact that you can throw in any old leftover vegetable, proving that a thrifty soup is a Scottish soup! “.

Given that Scotland overwhelmingly voted to remain in the EU as part of this week’s Brexit, it will be interesting to see if a new referendum on Scottish independence will again be undertaken…