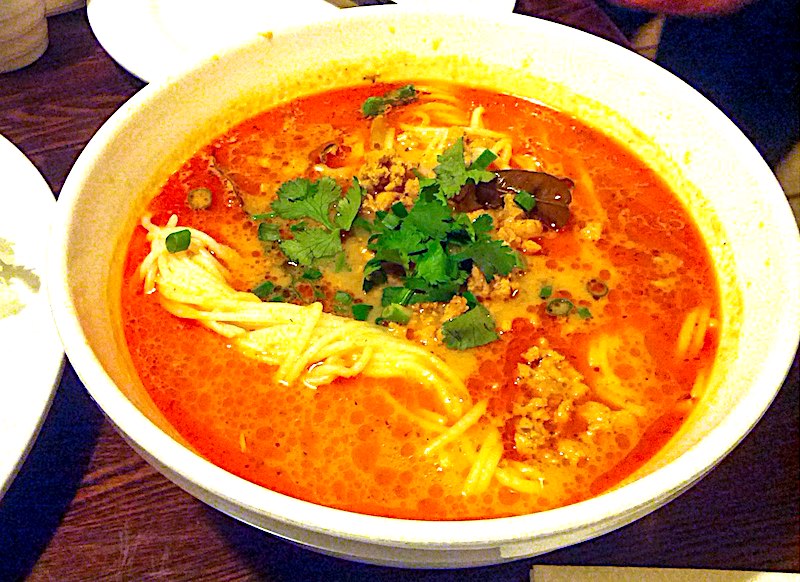 It is a long-simmered soup most often made with pounded chicken, fish, or pork and seasoned with common Lao ingredients such as fish sauce, lime leaves, galangal, garlic, shallots, Lao chilies, and perilla.

Khao poon is typically made with rice vermicelli noodles (“sen khao poon”), but rice stick noodles can also be used. It is served with an assortment of shredded cabbage, carrots, and banana blossom along with bean sprouts, fresh mint, cilantro, lime, and dried red chilies.

My version of this classic recipe is based very closely on the recipe from the personal notebook of Phia Sing – the last Royal chef of Laos. It has zero compromises on flavor or technique and is truly a culinary treasure. 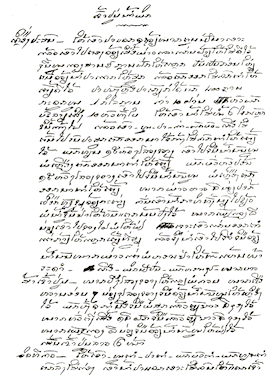 This recipe uses Padaek, sometimes known as padek, Lao fish sauce, or Lao bagoong (Lao: ປາແດກ). Padek is a traditional Lao condiment made from pickled or fermented fish that has been cured. It is a thicker, seasoned fish sauce that often contains chunks of fish. The fermentation takes a long time, giving padek an aroma similar to cheeses like Époisses.

Unlike other versions of fish sauce in Southeast Asia, padek is made from freshwater fish, owing to the landlocked nature of the former kingdom of Lan Xang.

Like all true Lao dishes, this fantastic rice noodle dish is spicy, pungent, herbal and funky all at the same time and uses some rare ingredients – I love it and I hope you will as well, ! 😀

1 small rice-bowl (¼ pint) of padek – add ½ pint of water and boil the padek until it is clear when strained through cheesecloth, reserve cooking liquid
300 grams of pork, free of fat, minced, rolled into a big ball, poached in the padek boiling liquid until cooked, and then taken out of the pot and finely pounded
15 (small) heads of garlic, the cloves to be peeled and finely chopped, then fried in pork fat until golden, and pounded
15 (small) shallots, peeled and thinly sliced, fried until golden in pork fat and then pounded
3 coconuts, husked and split open. Grate the meat with a ka-tai (‘rabbit’), put the extraction of coconut milk into a pot and boil it until the liquid is reduced, but without letting the cream separate, then take the pot off the fire
6 red fresno or jalapeno chili peppers, grilled until they are soft. Then remove the cores and pound the peppers as finely as possible before cooking them in coconut oil until a good aroma arises – do not let the mixture become overcooked or it will turn black (instead of red)
salt and ground pepper
chopped coriander leaves
chopped Perilla (shiso) leaves
fresh lime juice, to taste

Vegetables to be eaten with the dish:

Put 2 metal jugfuls (2 pints) of water in a pot, and put the pot on the fire.

Put in the pork bones, the fish, the galangal, spring onions and salt. Boil until the fish is cooked.

Take the fish out, debone it (if needed) and pound the flesh finely. Pound springs onions as well in a separate bowl.

Add the padek sauce, previously prepared, and stir until these ingredients are mixed together, then add the pork broth and the (reduced) coconut milk.

Stir, taste and check the saltiness. Squeeze in some lime juice. Add the fried mixture of red chili peppers.

Transfer this whole mixture to a big bowl. Garnish with ground black pepper and chopped coriander and shiso leaves. (The sauce is now ready.)

Put the rice vermicelli on a platter, in the middle. Arrange the cut-up vegetables around it, and place the whole fried chili peppers on top. Serve the sauce separately.