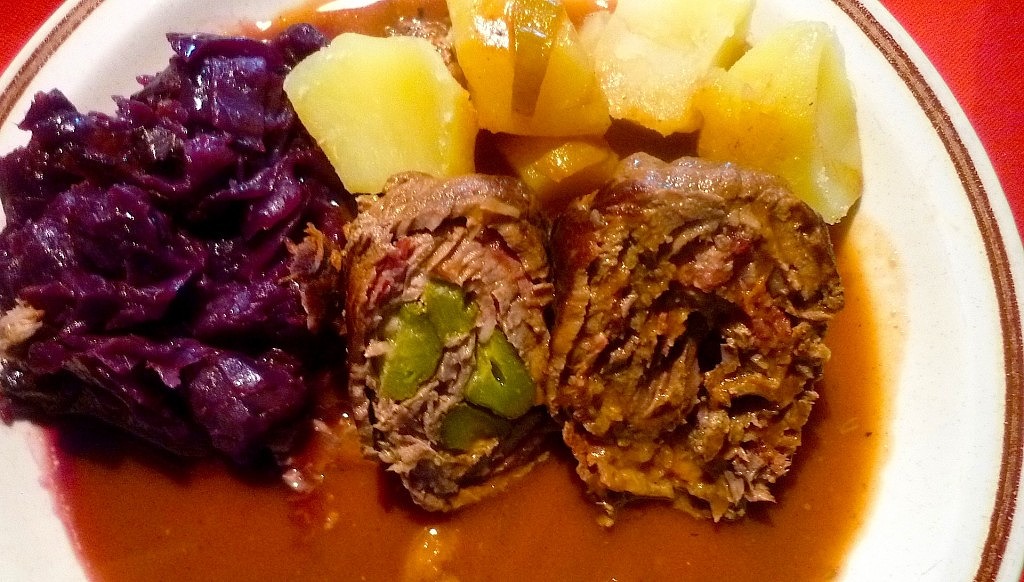 Citizens, this is quite possibly one of the best dishes ever for this Dictator – the recipe is incredibly delicous and not hard to make. I urge you to try this classic food of Bavaria and become one with your inner German. 🙂

Rouladen or Rinderrouladen is a German meat dish, usually consisting of bacon, onions, mustard and pickles wrapped in thinly sliced beef which is then cooked.

Beef or veal is typically used, though some food scholars tend to believe that the original version was probably venison or pork, and pork is still popular in some areas.

The beef rouladen as we know them today have become popular over the last century. The cut is usually topside beef or silverside since this is the cheaper cut.

The more expensive version would be the round steak, also known as rump steak. The meat is cut into large, thin slices.

The filling is a mixture of smoked and cooked pork belly, chopped onions and chopped pickles (gherkins) which is at times varied by adding minced meat or sausage meat. The mixture varies from region to region. Rouladen are traditionally served for dinner. Red wine is often used for the gravy.

Rouladen are usually served with either potato dumplings or mashed potatoes and pickled red cabbage. Roasted winter vegetables are another common side dish. The gravy is an absolute requirement to round off the dish and is usually poured over the meat. Spätzle are a good complement to the dish since they soak up the gravy well.

This dish was considered a dish for common people. It is nowadays enjoyed by many as a festive dish.

The best recipe I’ve found for Rouladen dates back to the late 60’s, from the seminal Time-Life series of Cookbooks that detailed many authentic recipes from around the world. I have of course tweaked it to my specifications, as noted in the recipe text. You can find many of these out-of-print cookbooks used on Amazon.

Spread the meat with Dusseldorf-style (hot) mustard, sprinkling with finely chopped onions, and then place a strip of raw bacon down the center and a half a dill pickle spear across the small end before rolling up, and securing each end with butcher’s string or silicone rubber bands (available at Walmart).

Brown the meat rolls in lard (preferably, or if you prefer use oil), then remove rolls from skillet, add two cups low-salt beef stock or homemade (preferred) to pan (, not stock), deglazing.

Bring to boil and add in chopped celery, chopped leeks (, chopped parsnips, garlic cloves (TFD note – this is my additon and not in the orginal recipe) and parsley to the rolls. Cover the pan, simmer on low for an hour, or until meat shows no resistance when pierced with a fork.

Remove the rolls to a heated platter and cover with foil to keep warm while you make the sauce.

Strain the cooking liquid through a sieve, pushing veggies through. Return the liquid to the skillet and reduce to 2 cups.

In a separate skillet, make a roux (TFD note – this is equal parts flour and butter), stir over medium heat until golden brown, then add in the reduced veggie liquid and whisk to a nice gravy consistency. Add rolls and heat through, garnish with minced parsley over the rolls.

Serve with sweet and sour red cabbage with apples, and boiled potatoes. 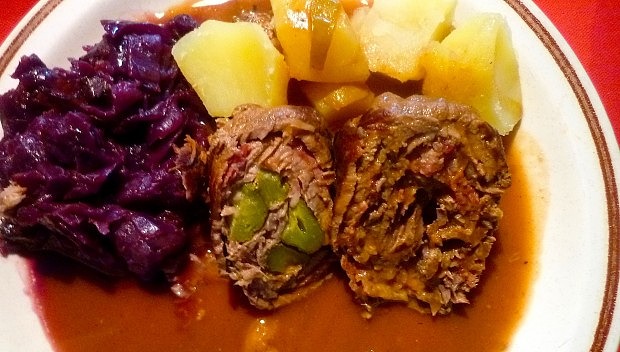