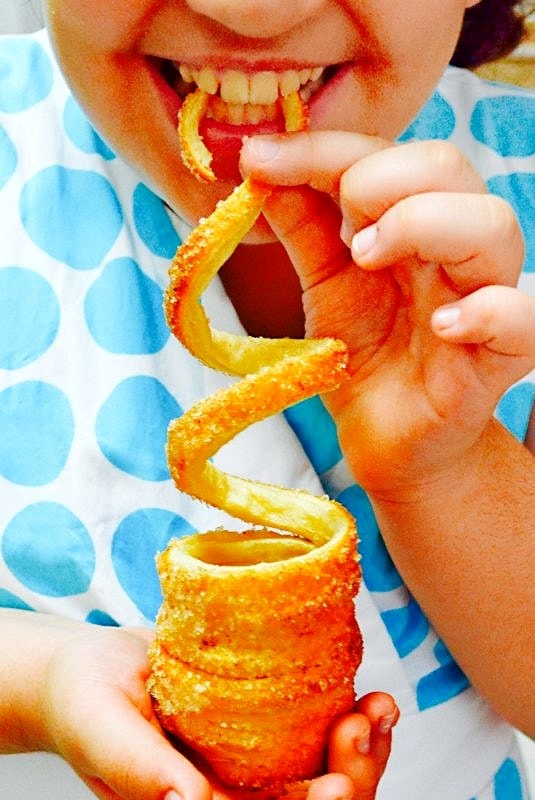 Citizens, Kürtős Kalács (sometimes transliterated kurtosh kalach) or Chimney Cakes were originally baked over hot coals by Hungarians residing in Transylvania, Romania. It is a spit cake specific to the Hungarian-speaking regions in Romania, particularly the Szekely land. Once a festive treat, it is now part of everyday meals. There are even whole industries devoted to this favored delight!

Kürtőskalács is made from sweet, yeast dough (raised dough), of which a strip is spun and then wrapped around a truncated cone–shaped baking spit, and rolled in granulated sugar. It is roasted over charcoal while basted with melted butter, until its surface cooks to a golden-brown color.

During the baking process the sugar stuck on the kürtőskalács caramelises and forms a shiny, crispy crust. The surface of the cake can then be topped with additional ingredients such as ground walnut or powdered cinnamon.

The first known record that hints at a family of cakes baked by rotating spit over cinders dates back to Medieval times (about 1450) and is found in a manuscript from Heidelberg. The description mentions a strip of raised dough that has to be wound in a helix shape around a baking spit, and brushed with egg yolk before baking.

My affectation is to use vanilla sugar for an additional level of complexity to this delicious recipe, Citizens! Of course, I also use the traditional lard in the pastry dough – no butter shortcuts here!

Do NOT follow this link or you will be banned from the site! Click here to see our Privacy Policies, Citizen!
1923shares
wpDiscuz
3
0
Would love your thoughts, please comment.x
()
x
| Reply