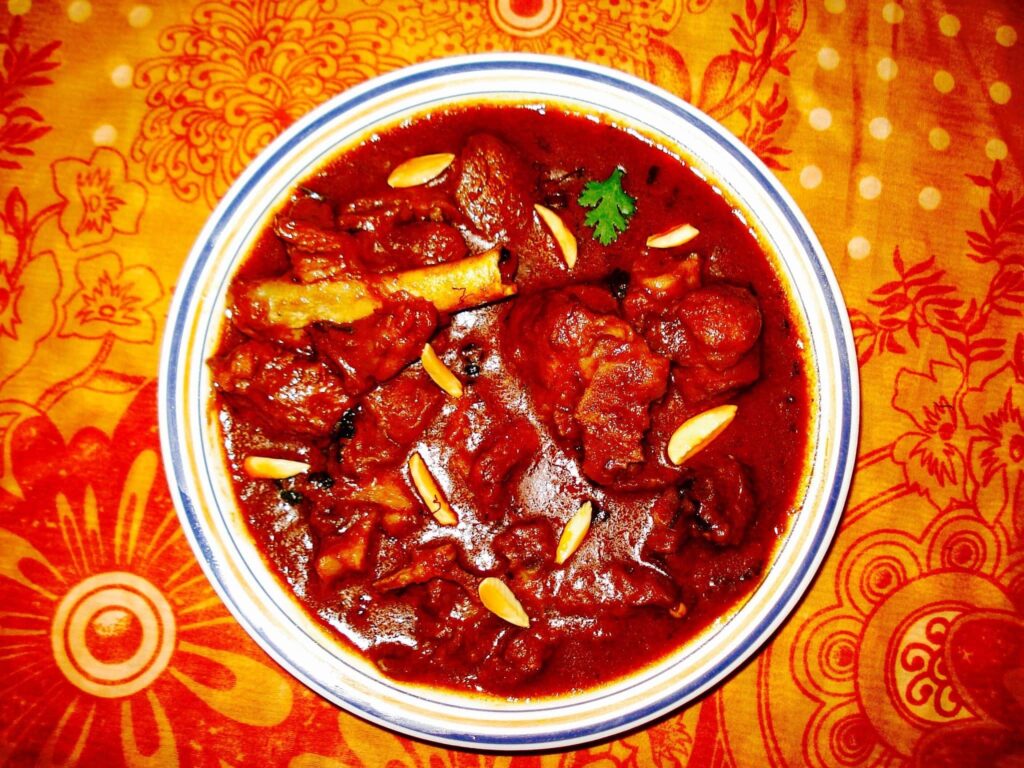 Citizens – I apologize profusely that I’ve been neglectful of daily postings the last 10 days! My recent jaunt to the Ultima Thule, the furthest North, has left me jetlagged and this lack of ardor on my part must and shall be fixed with alacrity!

Let’s get back into the posting groove with one of my favorite dishes and recipes, shall we? Rogan Josh is an aromatic mutton or lamb dish of Persian origin, though now identified with Indian cuisine.

Another interpretation of the name Rogan Josh is derived from the word “Rogan” meaning “red color” (the same Indo-European root that is the source of the French “rouge” and the Spanish “rojo”) and “Josh” meaning passion or heat.

Rogan josh is a staple of Kashmiri cuisine and is one of the main dishes of the Kashmiri multicourse meal (the wazwan). The dish was originally brought to Kashmir by the Mughals, whose cuisine was, in turn, influenced by Persian cuisine.

The unrelenting summer heat of the Indian plains took the Mughals frequently to Kashmir, which has a cooler climate because of its elevation and latitude.

Rogan josh consists of pieces of lamb or mutton braised with a gravy flavored with garlic, ginger and aromatic spices (cloves, bay leaves, cardamom, and cinnamon), and in some versions incorporating onions or yogurt. After initial braising, the dish may be finished using the dampokhtak slow cooking technique.

These chilies, whose flavor approximates that of paprika, are considerably milder than the typical dried cayenne pepper of Indian cuisine. The recipe’s spice emphasizes aroma rather than heat. Saffron is also part of some traditional recipes.

There are significant differences in preparation between the Hindu and Muslim dishes in Kashmir: Muslims use praan, a local form of shallot and petals of maval, the cockscomb flower, for coloring (and for its supposed “cooling” effect); Hindus eschew these, along with garlic and onions, but may add yogurt to give additional body and flavor.

Although the dish is from Jammu & Kashmir, it is a staple in British curry houses, whose menu is partly Bangladeshi cuisine, and is an example of dishes from the Subcontinent that got “co-opted” once they left the area (dosa as prepared in Glasgow is cited as a prime example).

My version of this classic recipe is laser-focused on authenticity and balanced flavor – I believe you, , will find it truly worthy of your next meal! 🙂 Try this with a delicious Indian rice pudding for dessert!