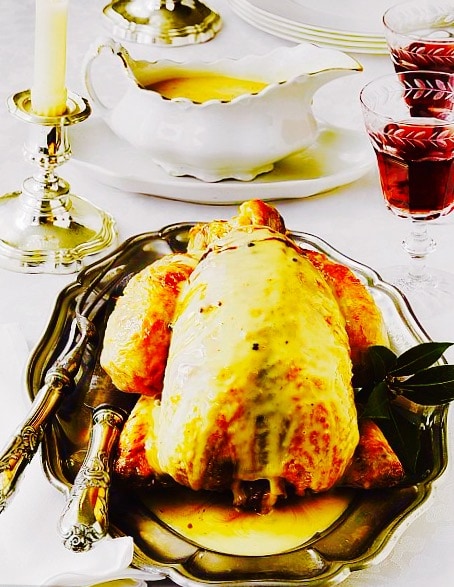 Citizens, this Edwardian historical recipe from the very early 20th century was detailed in the “Upstairs, Downstairs Cookery Book” (New York 1974). Like any number of Edwardian culinary innovations, this one is named for a major contemporary figure – in this case, famed British Prime Minister H. H. Asquith.

As you may be aware, British Edwardian society was rigid and extremely formalized in its behavior, and the wealthy ate to impress.

As noted on the PBS website for the historical reality show “Manor House”:

…at a big dinner party catering for 20, around 50 pieces of silver, china and crystal could be used by each guest – that’s a thousand items to be delivered at the correct time from kitchen to table. And each precious item must be counted in and out of the silver safe at every meal. If anything is lost the servants could be locked out of the house while their rooms are searched.

According to a guide from the time (‘Williams’, The Footman And Butler, Their Duties And How To Perform Them), footman would be expected to: “wear thin-soled shoes that their steps may be noiseless, and if they should use napkins in serving (as is the English custom) instead of gloves, their hands and nails should be faultlessly clean…and [a footman] should wrap one corner of a damask napkin around the thumb, that he may not touch the plates and dishes with the naked hand. A good servant is never awkward. He avoids coughing, breathing hard or treading on a lady’s dress; never lets any article drop, and deposits plates, glasses, knives, forks and spoons noiselessly.”

The family themselves are under a lot of pressure at the dinner table. Good manners while eating would be essential to avoid embarrassing their guests. An example of some of the rules they should follow are found in a book of manners (Etiquette: Rules & Usages of the Best Society, Anon, 1886):

“Greediness should not be indulged in. Indecision must be avoided. Do not take up one piece and lay it down in favour of another, or hesitate. Never allow a servant…to fill your glass with wine that you do not wish to drink. You can check him by touching the rim of your glass… Bread is broken at dinner. Never use a napkin in place of a handkerchief for wiping the forehead, face or nose. Everything that can be cut without using a knife should be eaten with the fork alone. Never lay your hand, or play with your fingers upon the table. Do not toy with your knife, fork or spoon, make crumbs of your bread, or draw imaginary lines upon the tablecloth.”

“It is not in good taste to urge guests to eat, nor to load their plates against their inclination.”

According to Mrs Humphry in Manners for Women (1897):

“Dinner would end when the signal to leave the table is given in the merest nod or smile to the lady who has been taken down by the host. She is sure to be on the look-out for it; but if she is not, it is sufficient to rise, whereupon all the ladies get up at once.” The etiquette guru continues that it is worth making “a decided effort to catch the eye of the principal lady, as she might consider it a slight if the hostess were to make the move without the usual co-operation. It might be put down to ignorance.”

The ladies should withdraw from the dinner room to take coffee in the drawing room, leaving in the same order in which they had entered, while the men enjoyed port, brandy and cigars before rejoining them.

Quite the spectacle indeed! Edwardian recipes are equally rich and usually quite complex – this one is a happy exception but still maintains the Edwardian nobility that was endemic to the upper classes of the time.

The big innovation in this recipe was the use of juniper, rosemary and fortified wine, which normally would only have accompanied game such as venison rather than domesticated poultry.

My tweak to the classic recipe is to use ground Turkish Urfa Biber pepper flakes in place of cayenne – I find it adds a touch of smoky flavor and provides a more complex heat than cayenne. I suppose that gives my version a “British Empire Meets Ottoman Empire” vibe. 😉