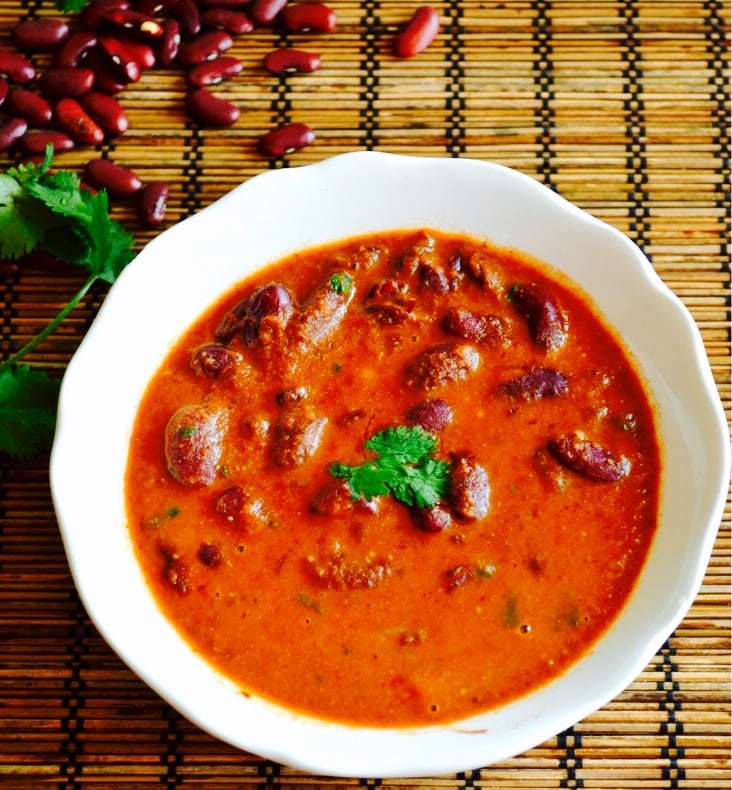 Citizens, Rājmā (Hindi: राजमा) masala is a popular Punjabi Indian vegetarian dish consisting of red kidney beans in a thick gravy made from tomatoes, onions and garlic with many Indian whole spices and usually served with rice and roti.

Although the kidney bean is not of Indian origin, it is a part of the regular diet of people living throughout Northern India and especially the Punjabis. The dish developed after the red kidney bean was brought to India from Mexico.

The geographical definition of the term “Punjab” has changed over time. In the 16th century Mughal Empire it referred to a relatively smaller area between the Indus and the Sutlej rivers.

In British India, until the Partition of Punjab in 1947, the Punjab Province encompassed the present-day Indian states and union territories of Punjab, Haryana, Himachal Pradesh, Chandigarh and Delhi and the Pakistani provinces of Punjab and Islamabad Capital Territory. It bordered the Balochistan and Khyber-Pakhtunkhwa regions to the west, Kashmir to the north, the Hindi Belt to the east, and Rajasthan and Sindh to the south.

The people of the Punjab today are called Punjabis, and their principal language is Punjabi. The main religion of the Pakistani Punjab region is Islam. The two main religions of the Indian Punjab region are Sikhism and Hinduism. Other religious groups are Christianity, Jainism, Zoroastrianism, Buddhism, and Ravidassia. The Punjab region was the cradle for the Indus Valley Civilisation.

The region had numerous migration by the Indo-Aryan peoples. The land was later contested by the Persians, Indo-Greeks, Indo-Scythians, Kushans, Macedonians, Ghaznavids, Turkic, Mongols, Timurids, Mughals, Marathas, Arabs, Pashtuns, British and other peoples.

Historic foreign invasions mainly targeted the most productive central region of the Punjab known as the Majha region, which is also the bedrock of Punjabi culture and traditions. The Punjab region is often referred to as the breadbasket in both India and Pakistan.

The region was originally called Sapta Sindhu, the Vedic land of the seven rivers flowing into the ocean. The origin of the word Punjab can probably be traced to the Sanskrit panca-nada, which literally means ‘five rivers’, and is used as the name of a region in Mahabharata. The later name for the region, Punjab, was introduced to the region by the Turko-Persian conquerors of India, and more formally popularized during the Mughal Empire.

Punjab (Persian: پنج‌آب‎) is a compound of two Persian words: panj (پنج‎, ‘five’; [pændʒ]) and âb (آب‎, ‘water’; [ɒːb]). The word Punjab thus means ‘The Land of Five Waters’, referring to the rivers Jhelum, Chenab, Ravi, Sutlej, and Beas. All are tributaries of the Indus River, the Sutlej being the largest. The ancient Greeks referred to the region as Pentapotamía (Greek: Πενταποταμία), which has the same etymology as the original Persian word.

Called “The Granary of India” or “The Bread Basket of India,” Indian Punjab produces 1% of the world’s rice, 2% of its wheat, and 2% of its cotton. In 2001, it was recorded that farmers made up 39% of Indian Punjab’s workforce.

Being a popular Punjabi dish, this recipe is prepared on important occasions. This version of rajma is popular in the northern Indian state of Punjab. The combination of Rajma and rice generally lists as a top favorite of North Indians.

It is very important to remember that when making Punjabi rajma, the kidney beans have to be cooked very well. They should melt in your mouth when you bite into them, offering no resistance. This is very crucial and the most overlooked aspect of cooking rajma!

Try and buy “new” beans – the older they are, the tougher they are. Check the packaging date when buying them and don’t buy rajma if they are older than 6 months.